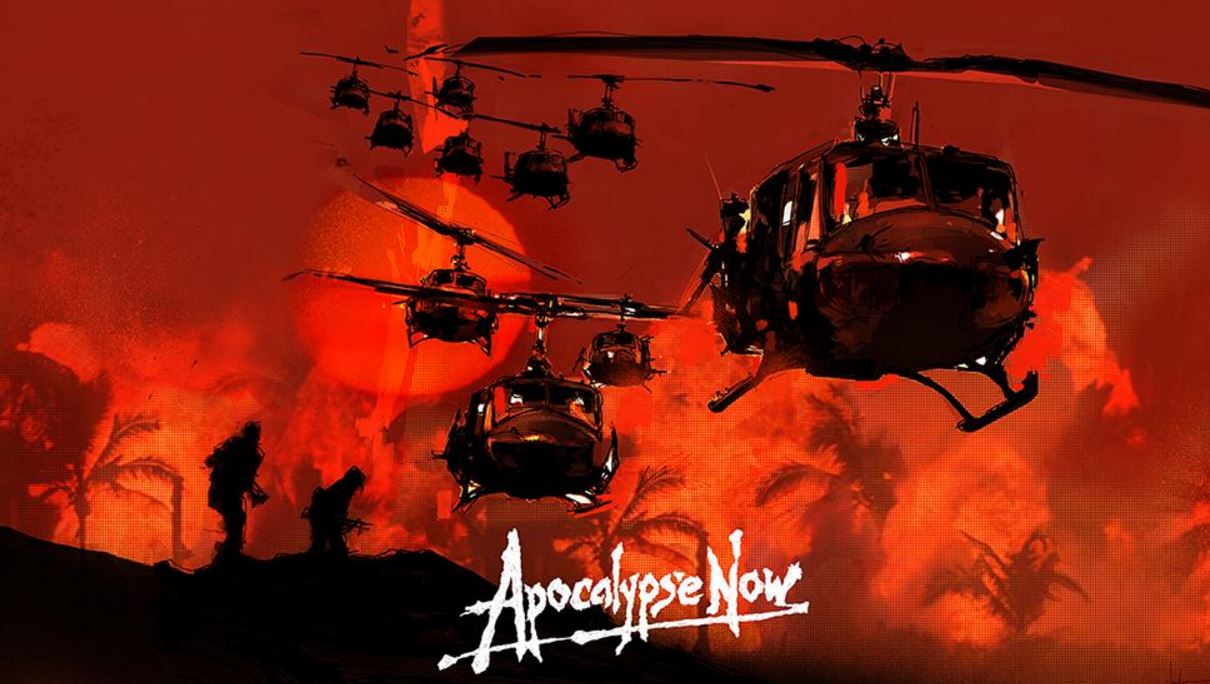 We continue with Film Goblin’s Behind the Scenes column. We cover the most interesting (and obscure) movies, music, people and events with some pics and factoids you probably already know, but if you don’t, even better! Feel free to recommend or contribute images or articles.

Francis Ford Coppola invested several million dollars of his own money in the film but after it went severely over budget he eventually had to mortgage his home and Napa Valley winery in order to finance the completion of the film.

The shoot was originally scheduled for six weeks. It ended up taking sixteen months and took Coppola three years to edit all the footage. The shoot was so agonizing on Coppola, he threatened suicide several times and wound up losing 100 pounds. Most of the dialogue was added in post-production and extraneous noise (such as helicopters) left many scenes with unusable audio. Randy Thom, one of the film’s sound mixers, said that the sound mix took over nine months to complete.

The scene at the beginning with Captain Willard (Martin Sheen) alone in his hotel room was completely unscripted. Sheen told the crew to just let the cameras roll. Sheen was actually drunk in the scene and punched the mirror which was real glass, cutting his thumb. Sheen began sobbing and tried to attack Coppola. The crew were so disturbed by his actions that they wanted to stop shooting, but Coppola wanted to keep the cameras going.

Initially, Coppola considered offering the role of Willard to Al Pacino, but later said that Pacino would only have accepted the role if they could have filmed the movie in his New York City apartment. Jack Nicholson was also offered the role but turned it down.

Robert Duvall’s iconic Oscar-nominated performance as Lt. Col. Kilgore amounts to just eleven minutes of screen time. The movie’s line “I love the smell of napalm in the morning.” was voted as the #12 movie quote by the American Film Institute.

The canteen scene with Kilgore and the wounded Viet Cong is based on an actual incident. The real-life army officer really did say, “Any man brave enough to fight with his guts strapped to him can drink from my canteen any day”.

The helicopters used in the famous scene where the choppers swoop in on the village while playing “The Ride of the Valkyries” belonged to Philippines President Ferdinand Marcos who agreed to let his army supply the helicopters and pilots used in the film. The Marcos government were coincidentally fighting rebels in the area where filming was taking place, and sometimes helicopters and pilots had to withdrawn from filming when they were needed in battle, which caused further problems.

Strategies of Wits and Power

A great deal of angst over the production involved the increasingly impossible Marlon Brando. Coppola believed that Brando had researched Joseph Conrad’s novel “Heart of Darkness” and was well versed on his dialogue.

However, when Brando arrived on set to shoot, Coppola was horrified to find that Brando had never read the novel, did not know his lines, and had become extremely overweight. After some panicking, Coppola decided to film the 5’10” Brando as if he was a massively built, 6’5″ brute (to explain Brando’s size) and steered the camera clear of Brando’s bloated stomach.

Brando angered Coppola to the point that the director turned over the filming of Brando’s scenes to Jerry Ziesmer, the assistant director. Even though Brando turns in perhaps the most memorable role in the film, his role only amounts to about fifteen minutes of screen time.

According to Dennis Hopper, Brando yelled at him over a simple misunderstanding on the set. He then decided to deliberately antagonize Brando whenever he could. This resulted in Brando refusing to share the set with him and the one scene they share together being shot on separate nights.

This wraps up this Behind the Scenes thread. Here are a few more quality images from APOCALYPSE NOW.