“There’s Something In Those Trees”

This was John McTiernan’s first studio film, and only his second feature after the moody horror thriller, Nomads.

The movie was almost titled Hunter and the name wasn’t switched to Predator until after production. Changes in the creature design, however, prompted the switch and the changes may have saved the film.

The 20th Century Fox logo is stretched because they wouldn’t let McTiernan use anamorphic widescreen due to the film’s opticals.

The film was shot entirely on location in Mexico. The fictional jungles of Val Verde are actual locations in Puerto Vallarta and Palenque, Mexico. However, because the Mexican jungle is deciduous, tons of fake leaves had to be added to the trees in order to make the jungle seem lush and inescapable.

The first week of shooting was a nightmare at times due mostly to the crowded jungle conditions caused by the presence of 300 Mexican crewmen with little, or nothing to do. The local union had overstocked the production with unnecessary workers, so McTiernan eventually sent half of them packing with pay. 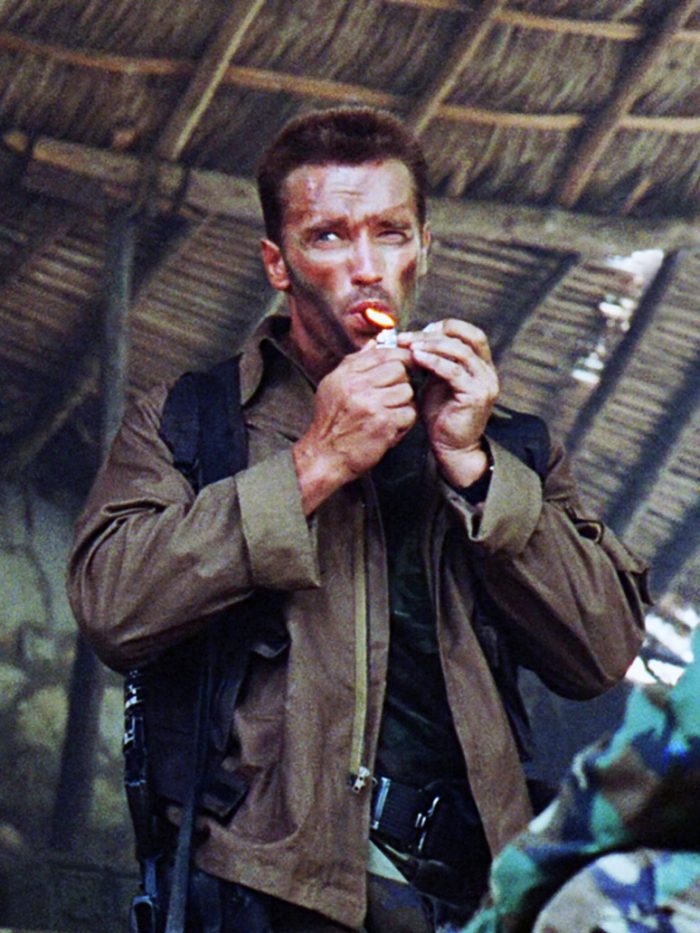 “I Ain’t Got Time To Bleed”

Initially, the alien design had a small head, a long neck, and big golden eyes. According to McTiernan:

“It looked kind of like the Anubis creature from Stargate mixed with a giant praying mantis, but not the least bit threatening.” 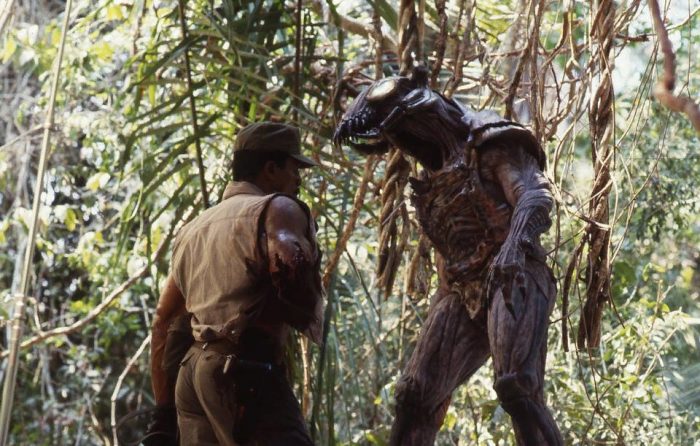 He halted production on the entire movie so it could be redesigned.

Other production difficulties, when cast and crew members got sick, it meant that producers had to figure out a way to secure additional financing so filming could continue.

In order to convince studio executives to fund the rest of the movie, they put together a rough cut of about an hour of footage.

The executives were so impressed that they agreed to not only fund the rest of the movie but also hired Stan Winston to fix the alien design. When it came time to shoot he brought in his own team to operate individual controls to make the creature’s face move.

After Winston got on-board, the Predator became fitted with mandibles, dreadlocks, and a mesh suit. Legend has it that Winston was given the idea of mandibles by director James Cameron on a flight to Japan.

Jean Claude Van-Damme was initially believed to be an ideal choice for Hunter. And it made sense, at least in the context of the original vision of the film. In that version, he’d be a stealth-like, ninja hunter that could easily chase after prey in the jungle.

Van-Damme quit after only two days.

While on set, he constantly complained about the costume being too hot and was annoyed that he would not appear in the film without the mask covering his face.

The actor also has a cameo in the helicopter at the end of the film. 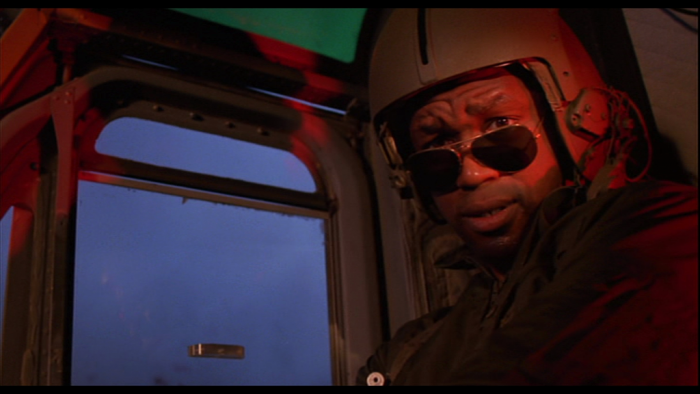 “Get To Da Choppah”

They initially attempted to use real heat vision cameras to capture the Predator’s vision, but not only was it a large piece of equipment with a connection cable that would only stretch four feet from the van, but there was also an even bigger problem, the ambient temperature in Mexico was in the 90s.

The green alien blood was originally meant to be orange, but it was difficult to accomplish. An effects guy suggested they instead cut open some fluorescent glow sticks and then pour the liquid wherever needed.

The GE M134 Mini-gun wielded by Jesse Ventura’s character didn’t shoot live rounds, but for safety reasons, the cast and crew were required to stand at least 50 feet away when it was fired.

The idea for Dutch to cover himself in mud to lower his body temperature to trick the Predator was actually a way Arnold Schwarzenegger used to relax between takes.

While Predator was a tight script, McTiernan allowed a certain level of improvisation to the main actors. Written as “Get to the chopper” Arnold’s ad-lib to “get to da choppa” was so powerful on set that the editors decided to leave it in.

McTiernan had forgotten all about the space-set opening sequence, in part because it was all post-production:

“Wow, I haven’t seen this movie in a long time, it was always in the script, but it never showed up until about an hour before the movie opened.”

Reaction to the film was initially mixed, however the film grossed $60 million in the United States, and has gone on to develop a cult following. The film has generated three sequels, Predator 2 (1990) and Predators (2010), and The Predator (2018), as well as two crossover films with the Alien franchise, Alien vs. Predator (2004) and Aliens vs. Predator: Requiem (2007).

I’ll leave you with this sweet Predator behind the scenes video on YouTube: