Paul Verhoeven wasn’t the first or even second choice to direct RoboCop. British director Alex Cox was initially contacted over the project, after impressing with his cult 1984 sci-fi comedy effort, Repo Man. 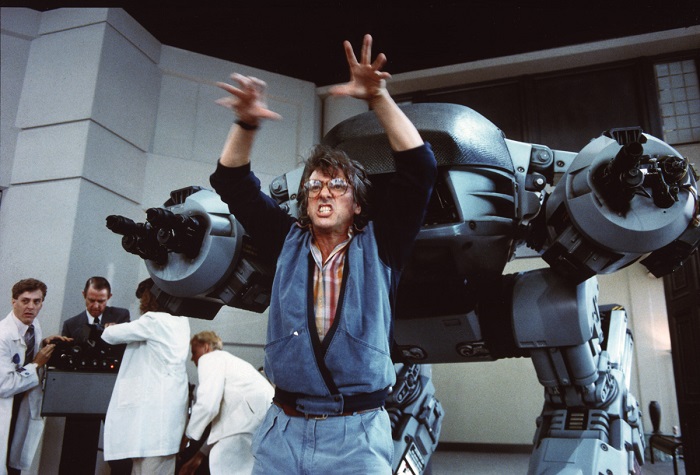 When Cox declined, attention then turned to Kenneth Johnson. Johnson had just written and directed the popular V sci-fi miniseries, but he also rejected the chance to direct RoboCop, calling the script “mean-spirited, ugly and ultra-violent.” 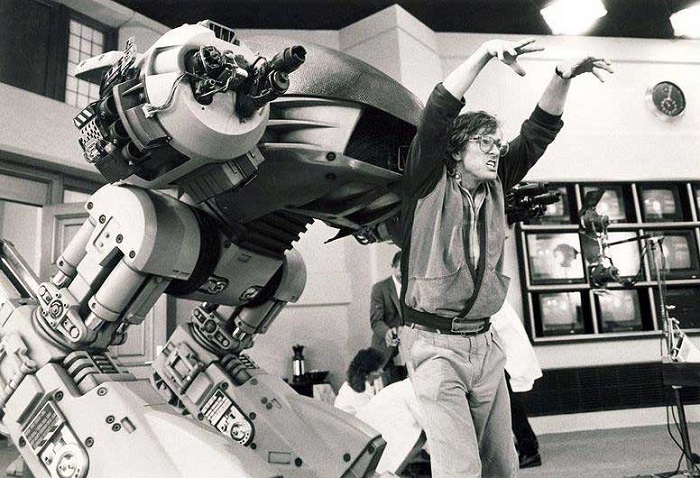 Only then was Verhoeven approached, and at that point, he still took some convincing. In fact, the Dutch filmmaker threw the script in the bin after reading it for the first time.

The studio, undeterred, sent a second copy of the script to Verhoeven and urged him to read it for subtext. 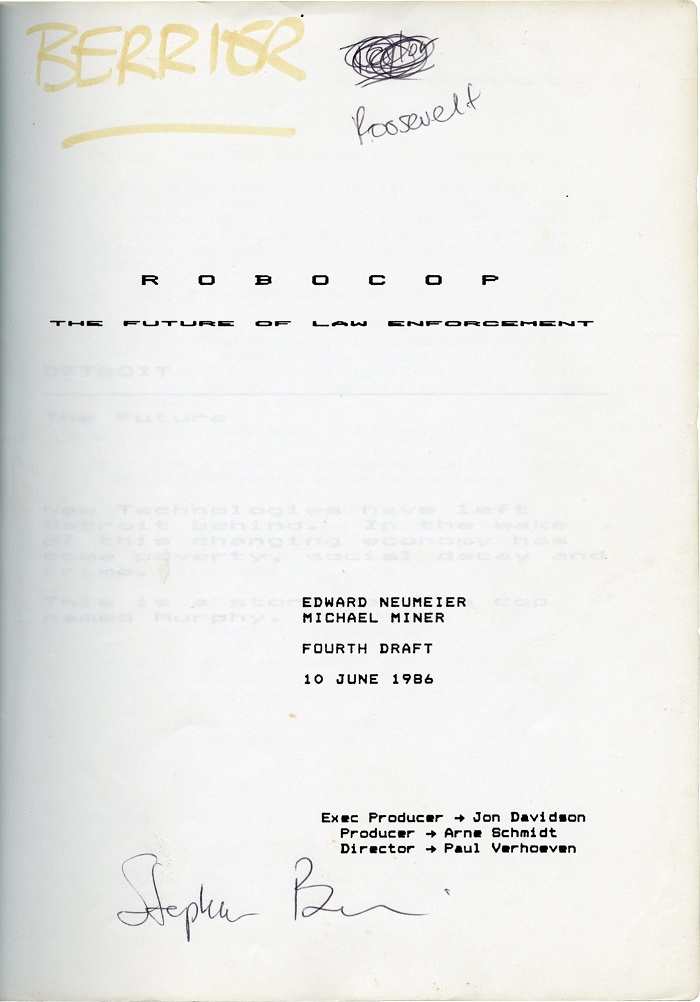 Still unconvinced, Verhoeven instead decided to have his wife, Martine Tours, read it and give him her thoughts. When she recommended it, Verhoeven re-read it and realized there was more to the story than first met the eye. He signed on soon after.

Screenwriter Edward Neumeier says he got the idea for RoboCop from working on the set of Blade Runner. It was about a cop hunting robots, which made Neumeier think of reversing it to make a robot cop hunting humans. 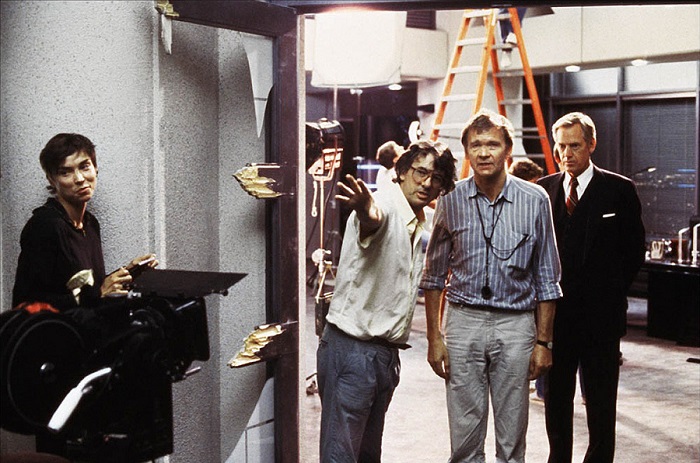 At the same time, music video director Michael Miner had been working on his own script for a film titled SuperCop, about a seriously injured cop who becomes a cybernetic police officer. The two combined their ideas, and RoboCop was born. 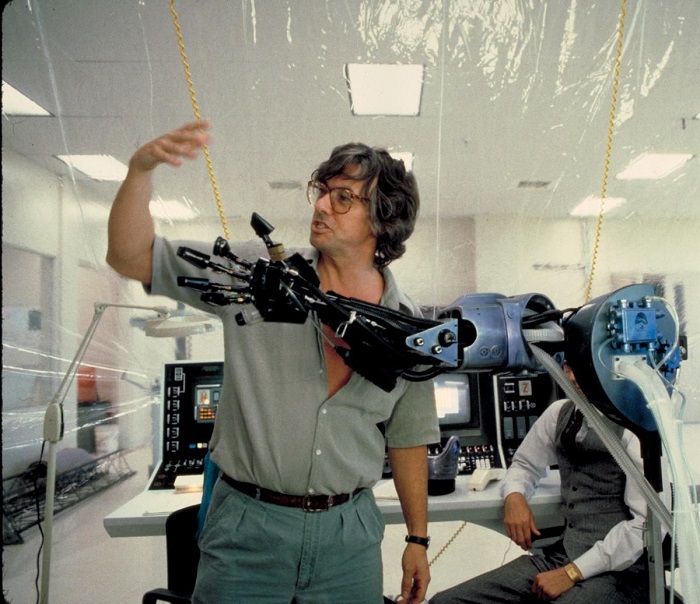 Rutger Hauer was Verhoeven’s initial choice for the role of Alex Murphy, the ordinary police office turned RoboCop, having previously worked together on several previous projects prior.

Armand Assante and Michael Ironside were also considered for the role, with the latter of the two also in the running for the part of villain Clarence Boddicker prior to the casting of Kurtwood Smith. 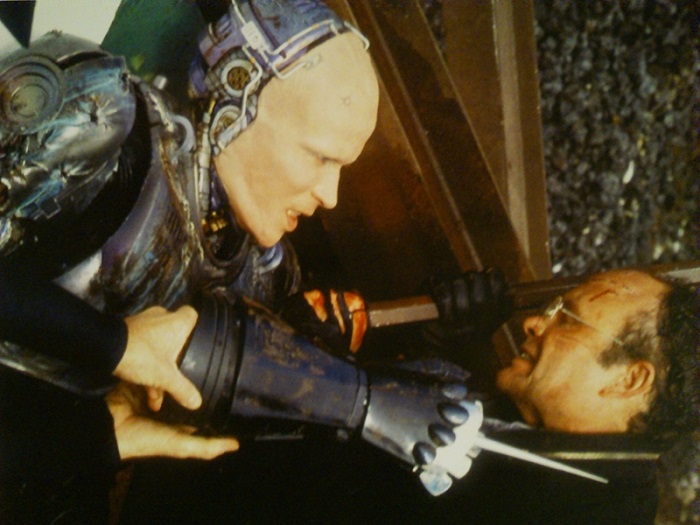 Studio bosses at Orion were also keen on having Arnold Schwarzenegger play the role. Ultimately, it was felt that Schwarzenegger and Hauer, in particular, would both appear too bulky on the screen when wearing the RoboCop costume. Instead, they sought out an everyman actor of a lighter build. 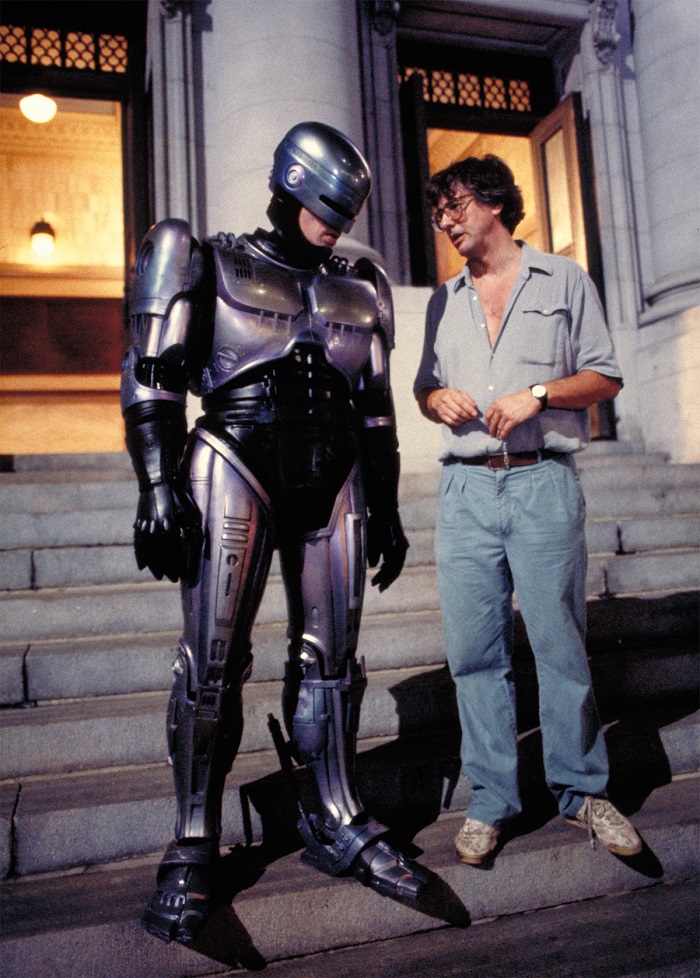 Verhoeven hit upon the idea of casting method actor Peter Weller, after seeing him in The Adventures Of Buckaroo Banzai Across The 8th Dimension. Weller won the role thanks to his light frame and the fact that he was able to convey emotion with his jaw.

Filming the demise of Paul McCrane’s Emil Antonowsky, a dummy resembling Emil was created for the moment he is run over and designed so that the head would pop off on impact, while balloons filled with leftover food from the on-set catering truck were thrown at the windshield for the reverse angle. 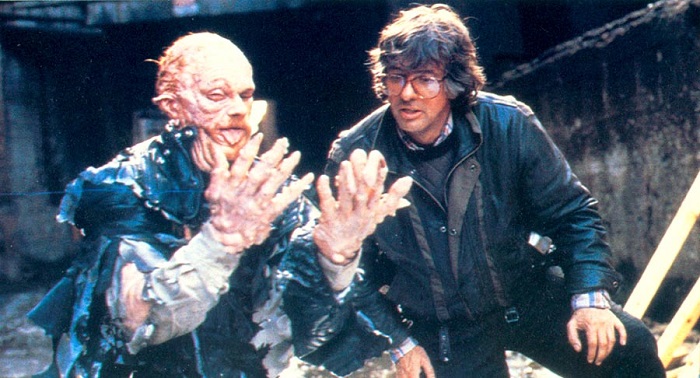 The Motion Picture Association of America (MPAA) pushed to have the scene cut, citing the extreme violence, but the filmmakers stood firm, pointing to initial test screening reactions that saw many cite the scene as their favorite.

The earlier scene in which Murphy is brutally tortured then murdered by Boddicker and his gang was also close to being cut. RoboCop had to be re-edited then resubmitted to the MPAA another 12 times before the R-rating was approved, with the majority of cuts coming during the Murphy scene. 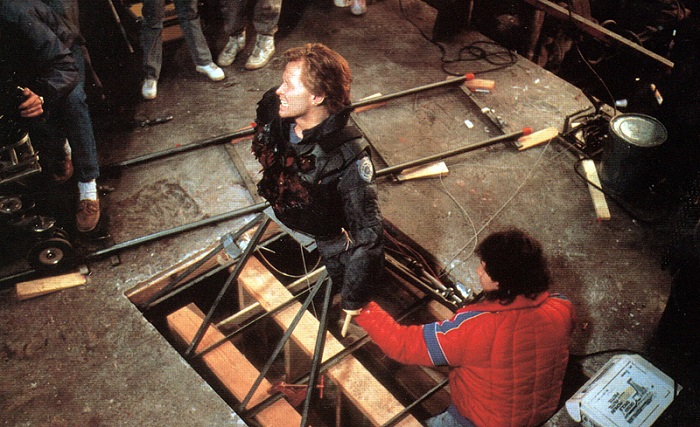 The cuts were not restricted to only the onscreen violence, the sound in that scene also had to be cut so that Boddicker’s gang sounded less sadistic, the sound of blood flowing was also less apparent, and the suffering felt by Murphy was reduced.

The studio was also worried that real cops might object to the brutality. The studio was concerned about the scene when RoboCop throws Boddicker through the glass while reading him his Miranda rights might upset actual police forces.

Unsurprisingly, when officers were brought in for the test screening, that scene was met with cheers and applause.

Some of the scenes which were cut can be found here:

Weller, a known method actor, originally planned to stay in character as RoboCop throughout his time on set. Between takes, the actor would only respond to Verhoeven’s direction when he was addressed as “Robo”. Unfortunately for Weller, most of the crew on set found it very difficult to take him seriously. 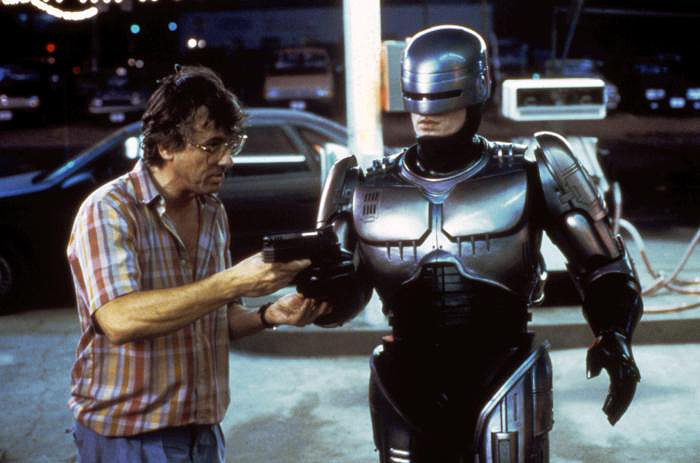 Verhoeven insisted on referring to all actors by their character names throughout filming, though, prompting Ferrer and Kurtwood Smith to break down in fits of laughter during Morton’s death scene after Verhoeven accidentally referred to the two actresses playing prostitutes as “bitches.”

“Serve The Public Trust. Protect The Innocent. Uphold The Law”

RoboCop’s suit came with a hefty price tag. The suit was by far the most expensive item on the set and producers were given one million dollars to make the six suits used in the film.

Three of them were made to look damaged from battle and the other three normal looking.

The suits were so hot and heavy that Weller was reportedly losing almost three pounds a day from water loss. Eventually, an air cooling system was installed to cool the actor down. Here are Weller’s thoughts on wearing the suit: 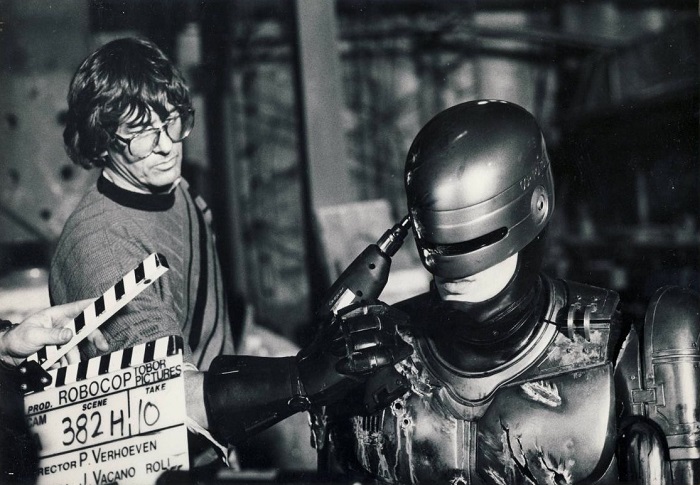 The infrared heat vision was actually pretty low-tech. The suit didn’t actually come equipped with infrared heat vision, but a much cheaper alternative. In order to achieve the look, the actors were painted with fluorescent body paint and a black light was shown on them.

The hands-on suits were made of rubber and this made it incredibly difficult for Weller to catch car keys. The scene with RoboCop catching the car keys took an entire day to film and up to 50 takes before finally getting the shot. 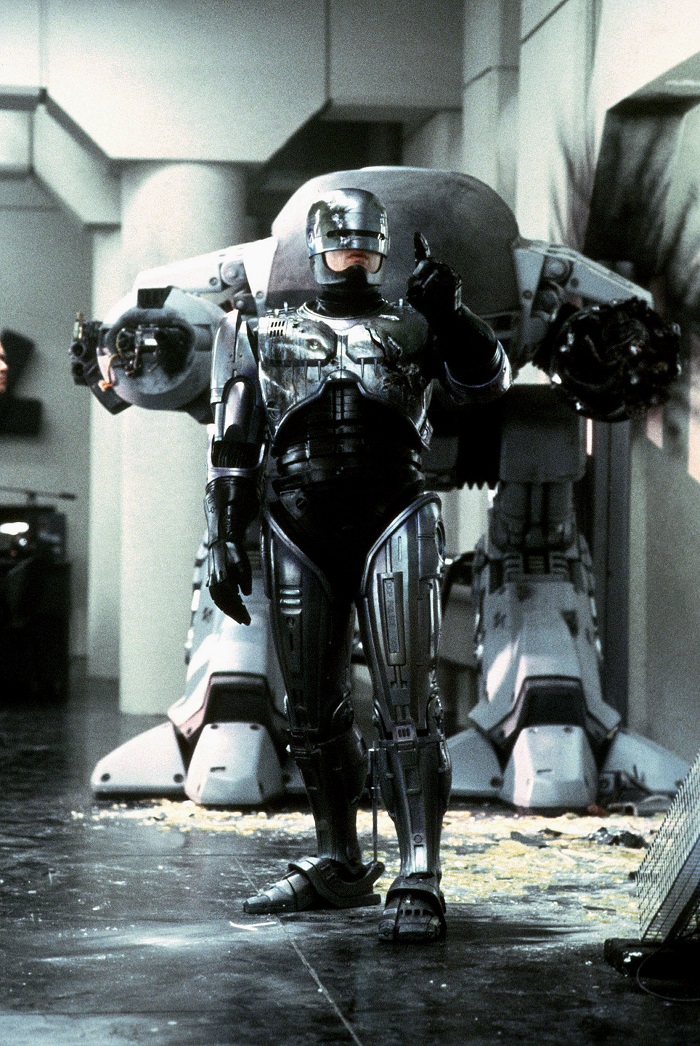 RoboCop didn’t wear trousers while driving. The suits didn’t function well with the cars of 1987 and Weller couldn’t fit into a car while wearing the entire suit. That’s why you only see RoboCop preparing to step into or halfway out of his car. For the scenes with RoboCop driving, Weller wore boxer shorts and only the top half of the suit. 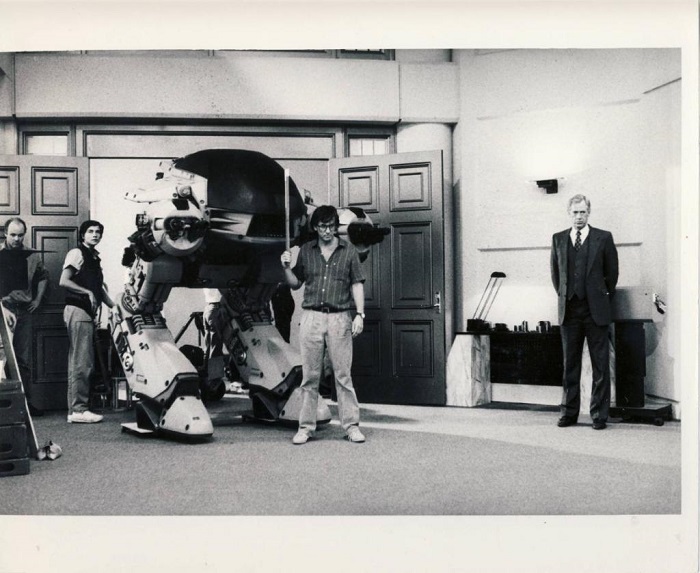 Just one full-scale model of the ED-209 robot was built for the film. Standing seven feet tall and weighing 300 pounds, the ED-209 design was actually based on the design of a Vietnam-era Bell helicopter combined with the rear legs of the Zentraedi Battlepod mecha that featured in the Japanese animated series Robotech. 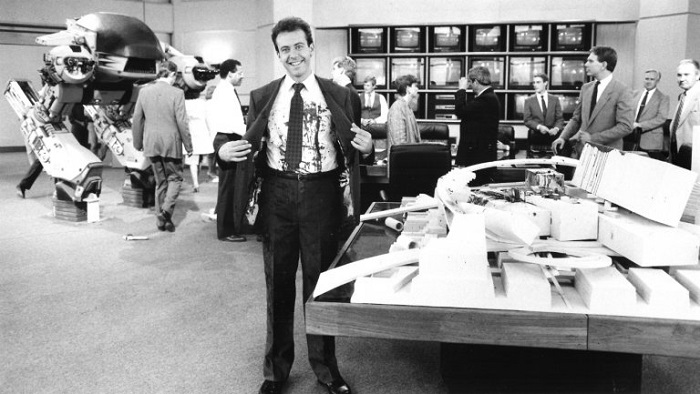 As impressive as it looked, the full-scale ED-209 was simply too cumbersome to be used for many of RoboCop’s action scenes. Instead, live-action animator Phil Tippett was recruited to animate ED-209. Tippett was previously responsible for the AT-AT walkers and the Tauntauns from The Empire Strikes Back.

Before post or mid-credits, Easter Eggs, and additional scenes were commonplace, once the credits have finished rolling, there’s a blink-and-you’ll-miss-it message appears on the screen:

“Unauthorized duplication, distribution or exhibition may result in civil liability and criminal prosecution by enforcement droids.” 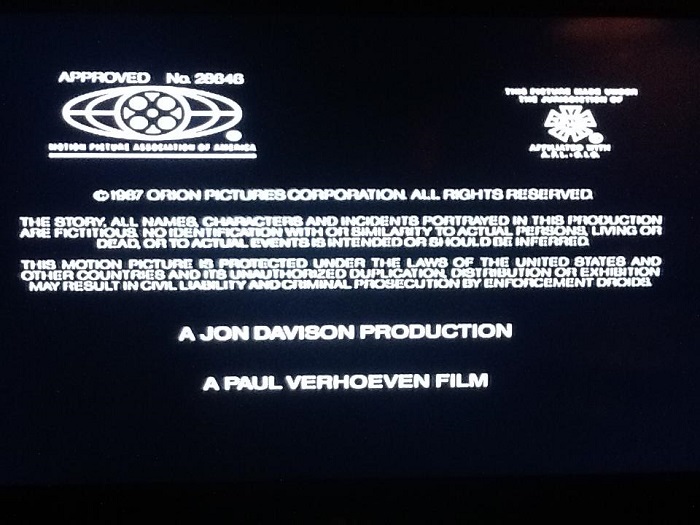