Welcome to Film Goblin’s Behind the Scenes column. We hope to cover the most interesting and timeless movies with some pics and factoids you might already know, but if you don’t, even better! Feel free to recommend or contribute images or articles in the comments below.

“Some Men Just Want To Watch The World Burn”

It is a misconception that David S. Goyer was responsible for The Dark Knight script. Goyer is credited for having created the story of The Dark Knight but didn’t actually write the movie’s script. Instead, it was Jonathan Nolan who wrote the film. 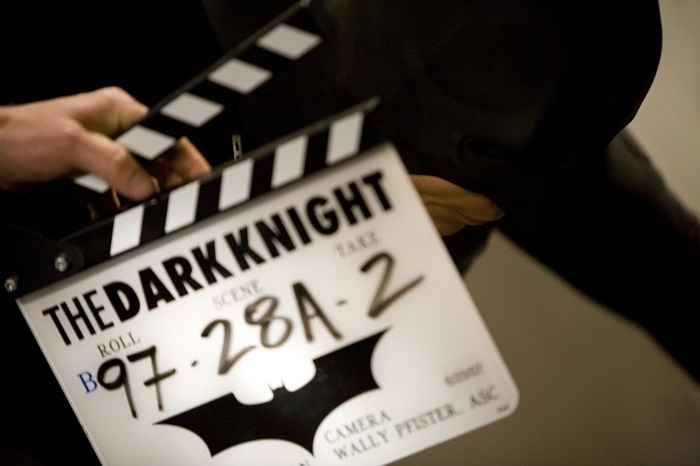 The same thing goes for The Dark Knight Rises, for which Goyer only received a “story by” production credit. 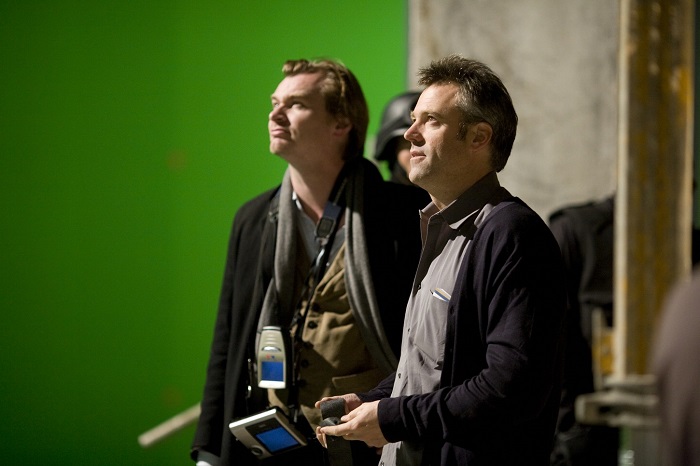 Despite the fact that Jack Nicholson’s portrayal of the Joker was a massive success in 1989’s Batman, Warner Bros. wasn’t sure about the direction Christopher and Jonathan Nolan were taking with the character in The Dark Knight. According to Jonathan:

“The studio didn’t get it.”

The Dark Knight is the first Nolan film to be a sequel, and though Batman Begins ends with Gordon handing Batman the Joker card as a kind of setup for the next film, the director wasn’t sure he’d be returning to Gotham City. 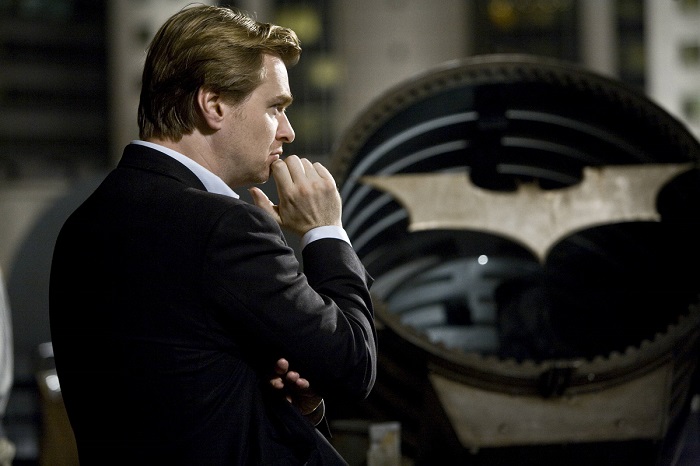 Nolan and Goyer did have ideas how a trilogy of films would happen, but after Batman Begins’ success, Nolan went off to make The Prestige. Ultimately, the lure of telling a Joker story proved too enticing for Nolan to pass on, so he eventually returned with Goyer to begin planning the story that would become The Dark Knight.

“I didn’t have any intention of making a sequel to Batman Begins and I was quite surprised to find myself wanting to do it. I just got caught up in the process of imagining how you would see a character like The Joker through the prism of what we did in the first film.”

For the actor to play Gotham’s District Attorney, Nolan ultimately chose Aaron Eckhart, who reminded him of Robert Redford.

For the role of Gotham City Asst. DA Rachel Dawes, Nolan had to look for a replacement. Katie Holmes played the role in Batman Begins but opted out of the sequel so she could act in the comedy Mad Money. Nolan ultimately decided on Maggie Gyllenhaal as the final choice for the role. Other actresses up for the role included Rachel McAdams and Emily Blunt. 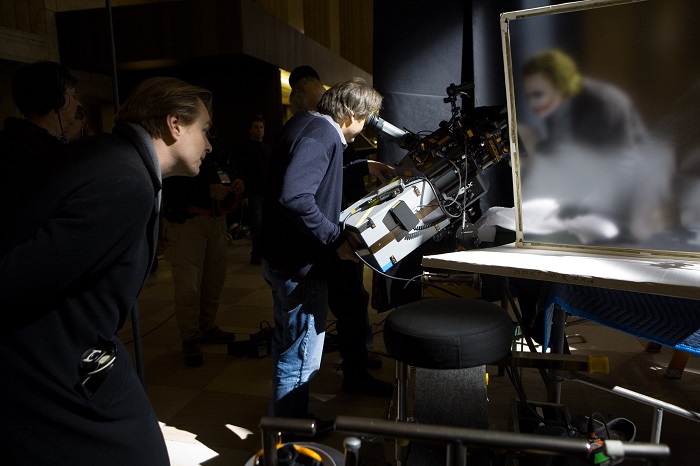 Though other stars like Adrien Brody, Paul Bettany, and Robin Williams had expressed an interest in playing the film’s villain, Heath Ledger was the only name on Nolan’s mind. 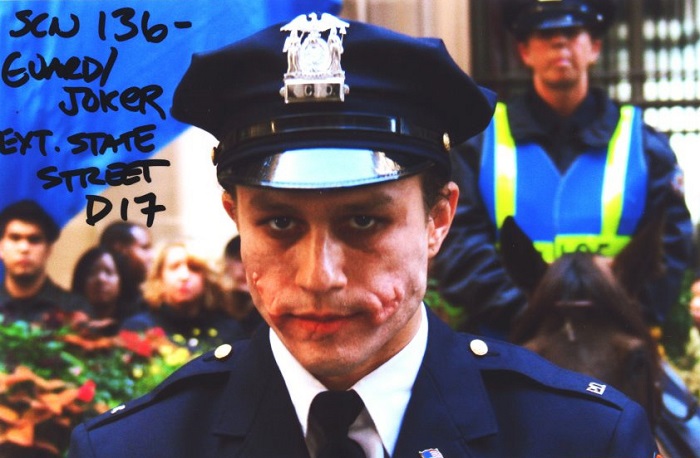 “When I heard he was interested in the Joker, there was never any doubt. You could just see it in his eyes. People were a little baffled by the choice, it’s true, but I’ve never had such a simple decision as a director.”

“Wanna Know How I Got These Scars?”

The Batpod look like an oversized version of any standard bike but it didn’t handle in the same way, so a trained stunt driver was needed. Jean-Pierre Goy took to the vehicle immediately and trained for months to master the high-speed sequences required for the film. 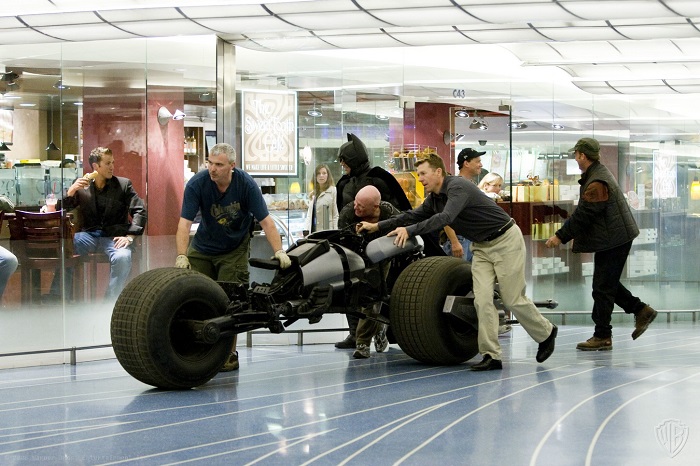 Christian Bale, who was more than willing to volunteer to drive the Batpod, was ultimately only able to ride it when it was attached to camera rigs. Bale admitted:

“Jean-Pierre was the only one who could master it. Everybody else just fell off instantly.” 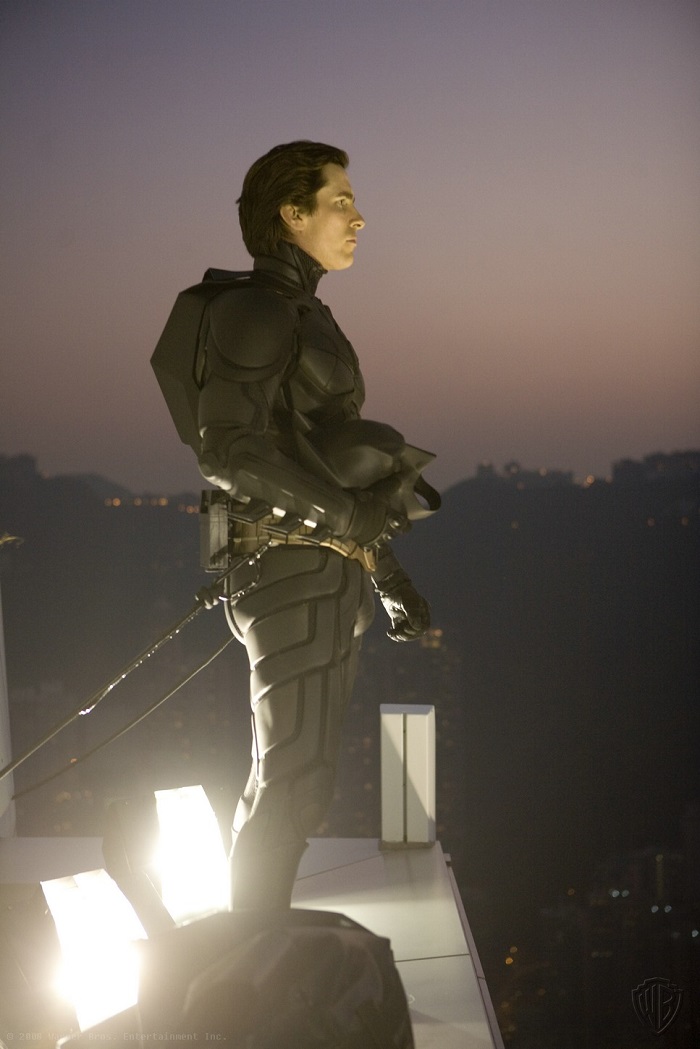 The shot of Batman, perched on top Chicago’s Sears Tower as he watches the city below, should have been carried out by a stuntman. But when Bale found out his stuntman Buster Reeves was preparing to perform the perch, he convinced Nolan that he should be the one to stand 110 stories above Chicago for the helicopter shot. 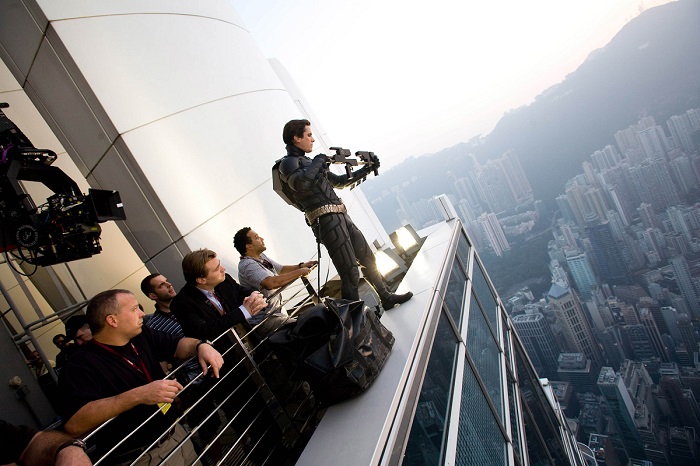 “It was important for me to do that shot because I wanted to be able to say I did it.”

Bale also insisted on performing the similar stunt in which Batman stands on a ledge of the IFC2 building in Hong Kong. By this time, he was comfortable with the height. 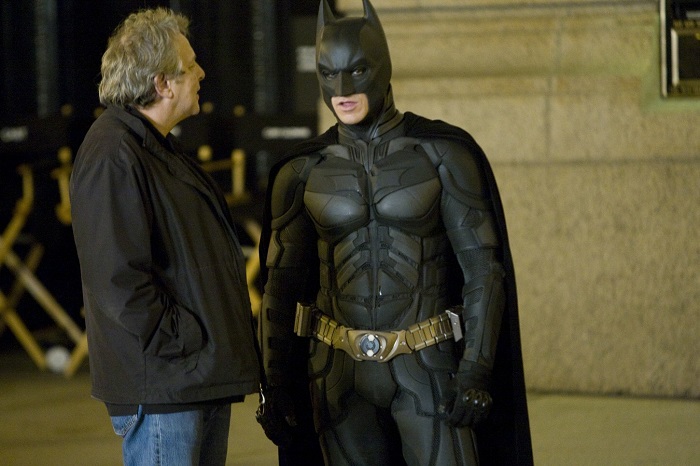 The new Batsuit designed for the film was constructed from 200 unique pieces of rubber, fiberglass, metallic mesh, and nylon.

This Batsuit was an improvement on the version from Batman Begins and allowed Bale to be more agile in his performance. 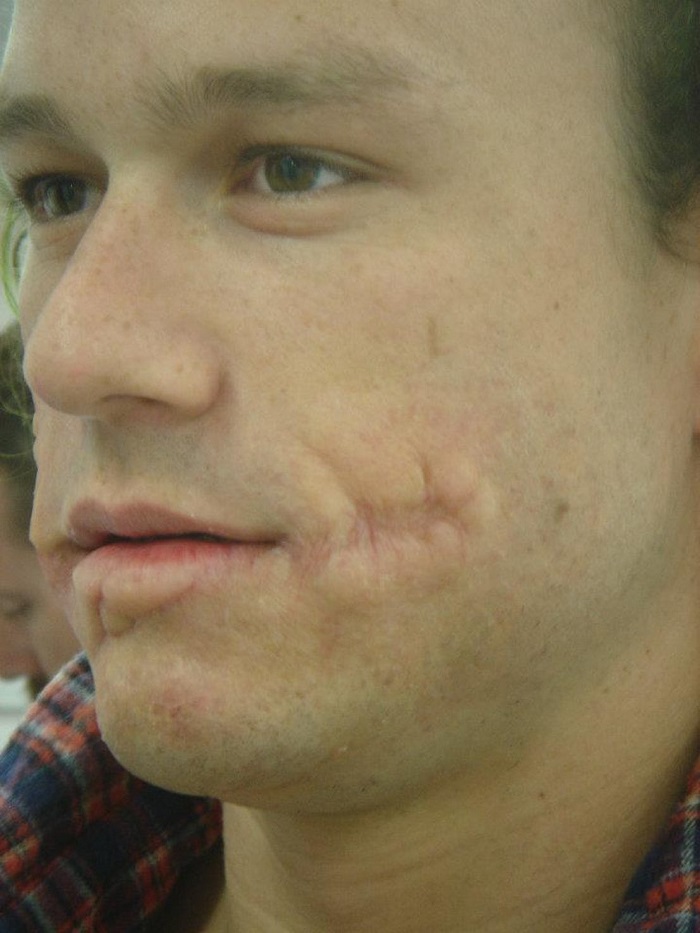 Heath Ledger’s sudden death on January 22, 2008, prompted speculation over the film’s release. Warner Bros. Pictures issued a statement verifying that Ledger had finished filming all of his scenes, as well as post-production photography, making the Joker his final, completed film role.

Ledger designed the Joker make-up himself, using white clown makeup and cosmetics, reasoning that since the Joker himself would design and apply it, he should do so as well. Once his design was greenlit, the makeup team replicated the same look each day for filming. 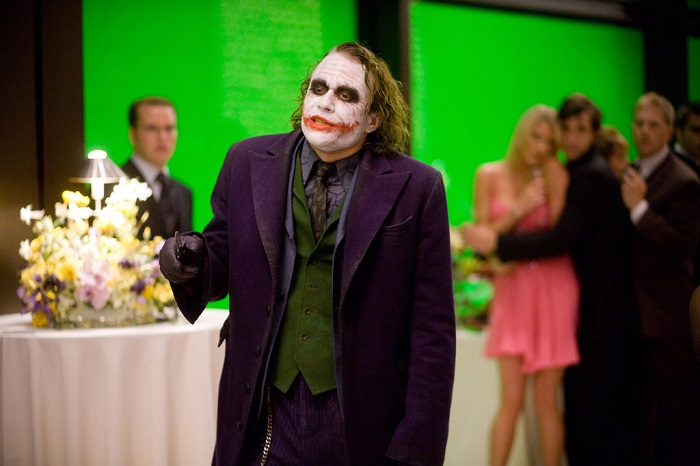 In preparation for his role, Ledger checked into a motel for a few weeks. During his stay, he delved into the psychology of the character. Devoting his time to developing the Joker’s movement, the voice, and the laugh. Ledger’s interpretation of the Joker’s appearance is said to be based on the anarchic look of punk Sid Vicious, combined with the mannerisms of Alex De Large from A Clockwork Orange.

Ledger directed both homemade videos that the Joker sends to Gotham City News. The first, involving the fake Batman was done under Nolan’s supervision. Nolan thought Ledger had done well with the sequence and further felt there was no need for him to be present when the time came to film the scene where the reporter (Anthony Michael Hall) reads the Joker’s statement. He trusted Ledger and let him do what he wanted, obviously content with the job after he’d seen the footage.

“Jack was like a clown figure, benign but wicked, maybe a killer old uncle. He could be funny and make you laugh. Heath’s gone in a completely different direction to Jack, he’s like a really scary psychopath. He’s a lovely guy and his Joker is going to be a hell of a revelation in this picture.” 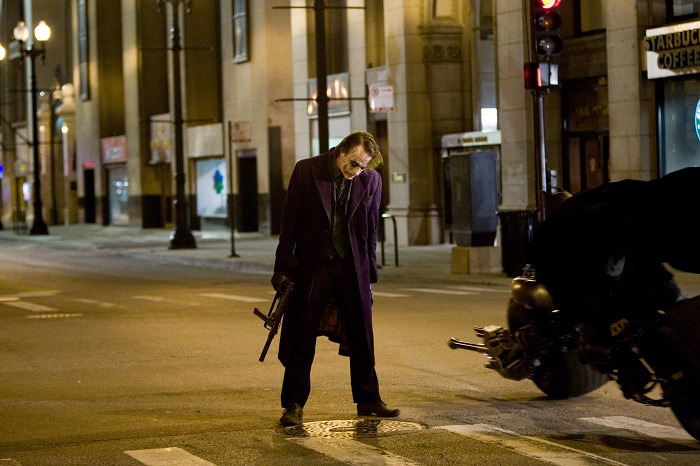 Caine bases this belief after rehearsing a deleted scene where the Joker pays a visit to Bruce Wayne’s penthouse. He’d never met Ledger before, so when Ledger arrived and performed he gave Caine a real fright and he forgot his line.

While the movie was filming a chase scene on Lake Street, the Chicago Police Department received several calls from the public reporting that police were involved in a vehicle pursuit with a dark vehicle of an unknown make or model.

And during the chase scene with the Joker and the SWAT vans, one, of only four, of the world’s IMAX cameras were destroyed. 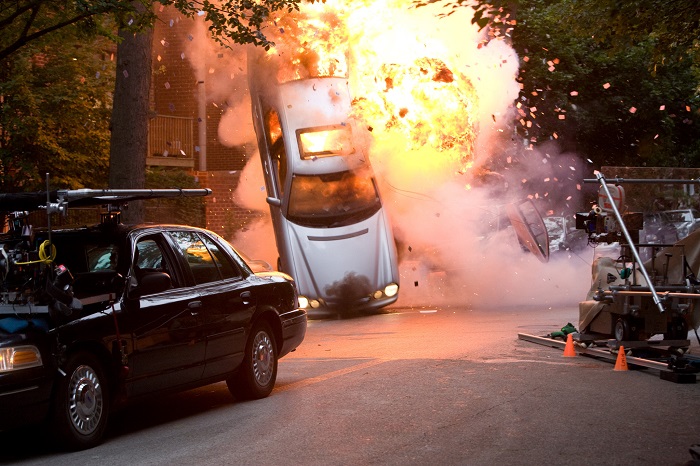 Bruce Wayne drives a sweet Lamborghini Murcielago in the movie. “Murciélago” is the Spanish word for “bat”. 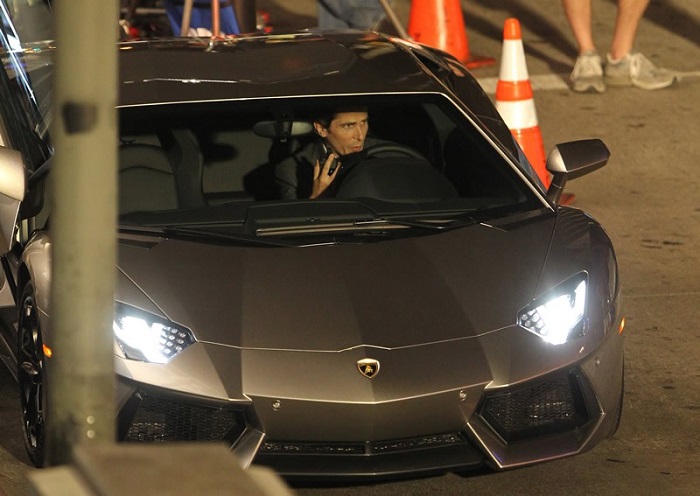 The back of the bus crashing into the bank in the opening sequence was much harder to pull off than planned. The bus had to be taken apart then reassembled inside the building (a disused post office), before being concealed behind a large false wall and finally being blown backward with air cannons.

Bale admitted he did not put on as much muscle weight for this film as he did for Batman Begins, this was so he could fit into the leaner, and more flexible Batsuit.

Bruce Wayne’s penthouse set was shot on the ground floor of an office building in downtown Chicago. During the daytime, the same exact space was re-dressed and used as the set for Harvey Dent’s press conference scenes. 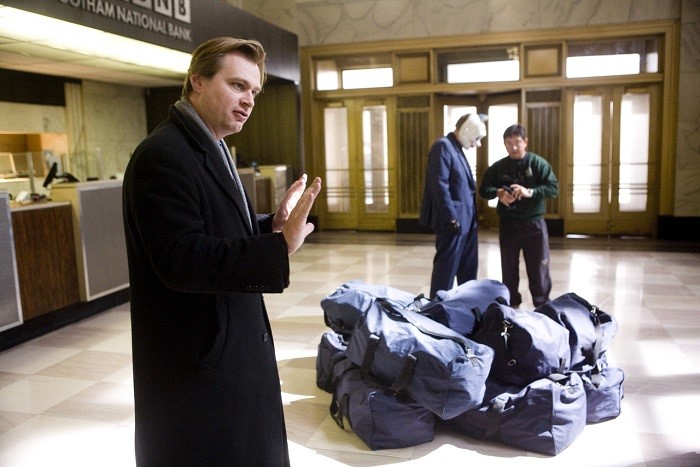 The film received eight Academy Award nominations where it won the award for Best Sound Editing, and in 2016 it was voted 33rd among 100 films considered the best of the 21st century by 117 film critics from around the world.

Ledger posthumously won a total of 32 Best Supporting Actor awards for his work on this film, including the Oscar, Golden Globe, BAFTA, SAG and Critics’ Choice award.

DISCLAIMER: We try our best to attribute images, videos, and quotes to their creators and original sources. If you see something on Film Goblin that’s incorrect, please contact us.