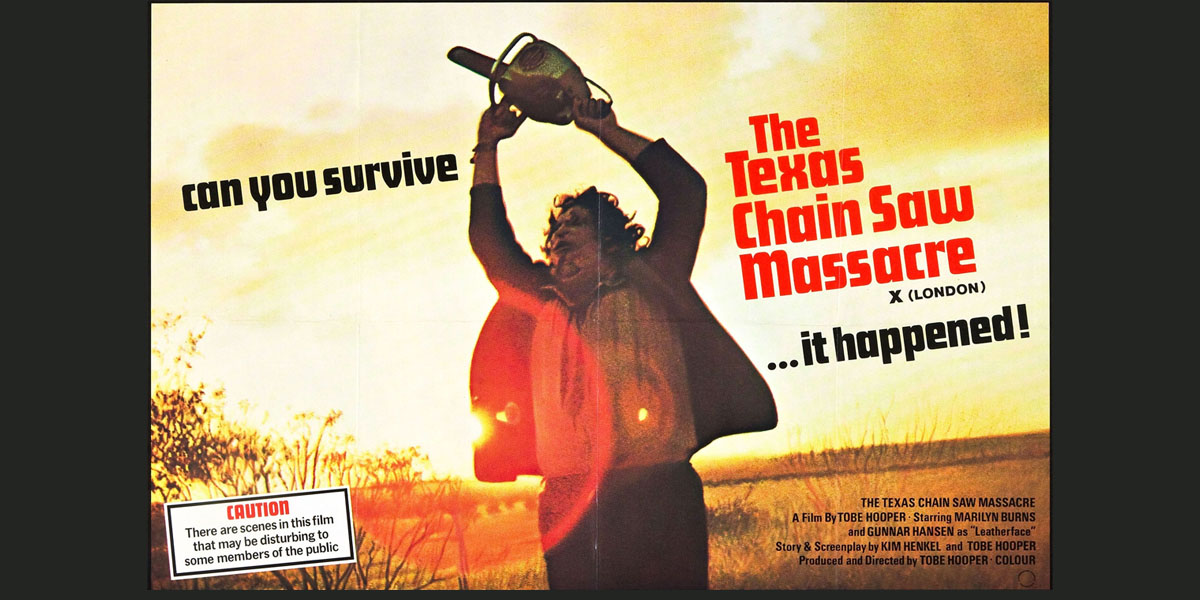 Welcome to Film Goblin’s Behind the Scenes column. We hope to cover the most interesting (and obscure) movies, music, people and events with some pics and factoids you probably already know, but if you don’t, even better! Feel free to recommend or contribute images or articles.

The Texas Chainsaw Massacre: An Execution of Preparation

The script was originally entitled Leatherface. At various points before the film’s release, the title was switched to Head Cheese and finally The Texas Chainsaw Massacre. The film’s original budget was $60,000; during the editing process, the filmmakers amassed an additional $80,000 in costs, this required selling off portions of their ownership of the film’s royalties.

The movie had its opening in Austin, appropriately, since its director was a University of Texas professor and documentary cameraman. Though it’s hard to believe, Tobe Hooper tried to keep the gore and violence of the film to a minimum so he could get a “PG” rating. That didn’t work. He got an “R” rating.

Filming of The Texas Chainsaw Massacre occurred during the middle of the scorching Texas summer. You can clearly see the sweat dripping off, even streaming off, the actors. Director Hooper said, “everyone suffered physically on the set because there was no stopping to wait for cooler weather”.

Even though some days were well over 100 degrees, they had to press on to get filming wrapped in a month. While the shoot took place over five weeks, the events of the actual film all occur within 24 hours.

Consequently, the cast had to wear the same clothes each day. Marilyn Burns’ (Sally) costume ended up caked in both fake and real blood, while Gunnar Hansen (Leatherface), had to wear a blood-stained butcher’s apron, revealing at the end of filming, he smelt so bad that no one would sit next to him at lunch.

In his book, Chain Saw Confidential, Hansen said that the name of the family in the original is Slaughter, not Sawyer. If you look above the Coca-Cola sign at the gas station you will see “W. E. Slaughter BBQ.”

Hansen also said that the power of the chainsaw myth they created on film persists with such tenacity in Texas that people would not believe him when he said that no such chainsaw crimes ever happened in the state. Understandable as the film falsely marketed itself as “based on a true story.”

Hooper used a real human skeleton from Japan because it worked out cheaper than buying a fake prop. Remains of “eight cows, three goats, one chicken, two deer, and an armadillo” were also incorporated into the set, to create an authentic slaughterhouse atmosphere.

Most of the filming took place in the farmhouse where the heat was insufferable and very little ventilation. The crew covered its walls with drops of animal blood obtained from a local slaughterhouse. Weeks of shooting in temperatures of up to 40C, the set soon began to reek.

You Can Choose Your Friends…

During the dinner sequence towards the end of the film in which Leatherface slices Sally’s finger, tenderly allowing the Grandfather (John Dugan) to slurp down some of her blood, the crew had difficulty getting the stage blood to come out of its tube, so instead Burns’s index finger was cut with a razor.

Burns also suffered numerous scratches and bruises from running through the woods, hurt her ankle, and was poked, prodded, dragged and hit during filming. Burns’s costume was so drenched with stage blood that it was “virtually solid” by the last day of shooting.

Edwin Neal, who starred in the film as the scarily unhinged hitchhiker, used to watch the movie repeatedly at a cinema in Austin after its release. The actor would scare unsuspecting cinemagoers by waiting until his scenes began, then leaning forwards and tapping them on the shoulder. Understandably, the cinema finally asked him to stop.

This wraps up this Behind the Scenes thread. Here are a few more quality images from THE TEXAS CHAINSAW MASSACRE.