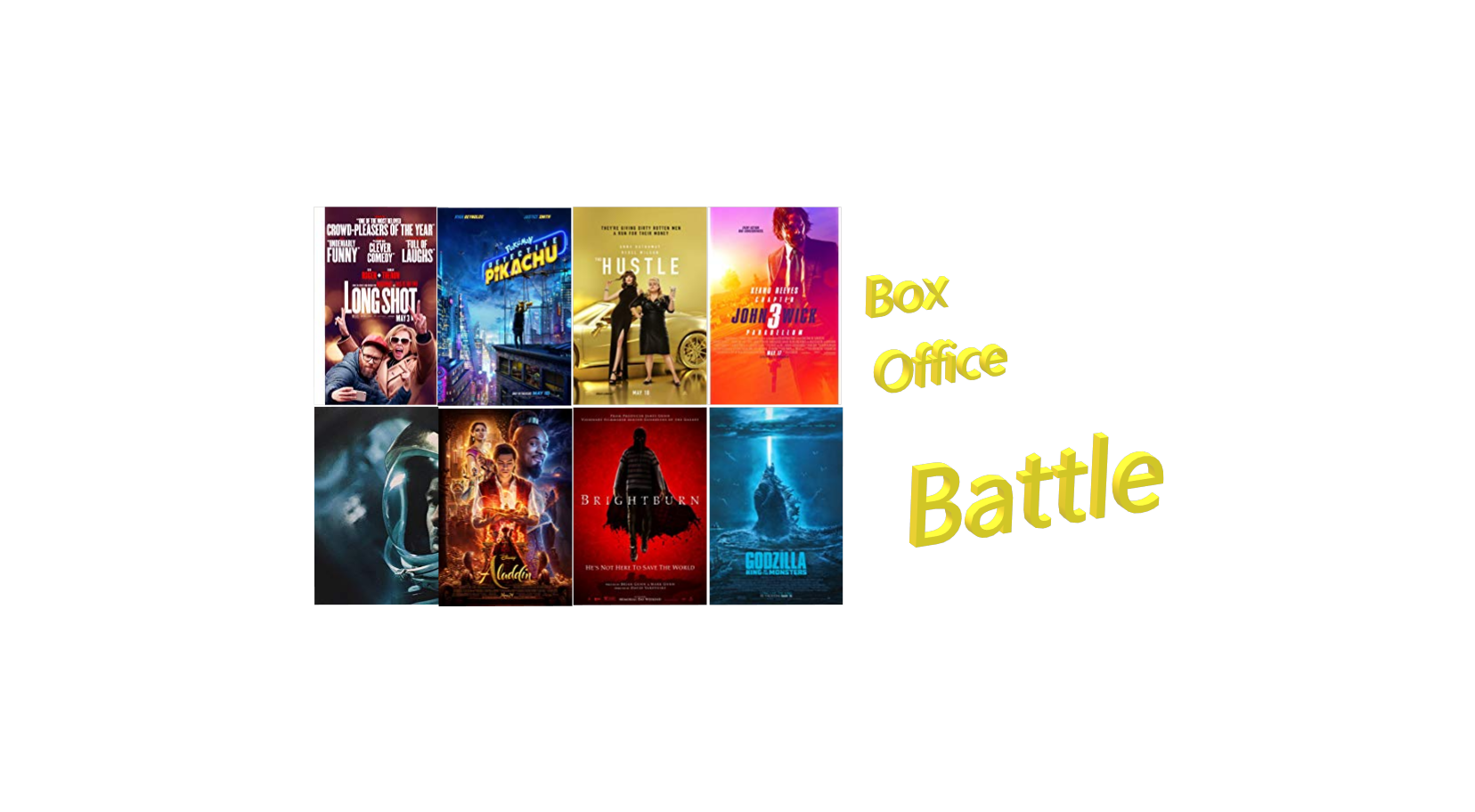 Well. I think this month is the ultimate anti-climax after Avengers Endgame. Still, there are a few that might finish off the month with some fun. The beginning of the month looks like a wasteland though.

Before we get started, let’s see how everyone did in April.

COMPUTER GUY: Can’t imagine that this could be any good $10 million, and that’s a Long Shot.

SKANK: I can never decide if Rogen is unfunny or if he’s just an asshat. $11 million. (Editor’s Note: There’s no need to choose!)

YODA: I am so old that even when Pokemon came out, I was still too old for it. I have zero interest in this movie but I appreciate making something that seems a bit off-kilter. It seems that there is a large generation behind me that want this. $75

COMPUTER GUY: I would have called this a bomb a few years ago. Then that stupid Pokémon Go game came out and the world went mad. So there is a market for this crap. $80 million

SKANK: I don’t know jack about Pokemon. Other than it originated from the Far East and is now a wee bit popular. This could be a surprise hit. $88 million.

COMPUTER GUY: I want this to fail so badly. $9 million

COMPUTER GUY: Although popular films, they do not make a lot of money. I think that this one will not do a well as we think, I hope I am wrong about this! $35 million

SKANK: Man, they can’t close this franchise after 3 movies, it’s one of the few non-superhero highlights that Hollywood has got right in the past few years. I’m with Yoda on this, $45 million.

YODA: I don’t know the book but I’m betting this will be real good and really bomb. Too bad. $3. That’s 3 dollars.

COMPUTER GUY: For a film that is going to be out in a few weeks, I had to look it up online. This is not a good sign. Netflix anyone??? $5 million

SKANK: Not a movie that’s been on my radar, but the synopsis and cast featuring Brad Pitt and Donald Sutherland are solid, and it was made on a $50m budget. A shot in the dark, $35 million.

YODA: From the ever-growing list of things that shouldn’t have happened. $65

COMPUTER GUY: After the failure of The Nutcracker (Fantasia reference), and Dumbo, I hope that these pointless remakes all fail. $75 million

SKANK: No real interest in any of these “live action adaptations“, and my kid has shown no interest either. I couldn’t care less about this movie, and neither do Disney. $65 million.

YODA: What if Superman was a psychopath as a kid? I like the concept. James Gunn has a hand in it so it will be more than a typical horror I bet. $25 but with legs.

COMPUTER GUY: Ever since The Omen, there has been an evil child movie made almost every year. Most of them suck. I can’t see this one being any different. $13 million

SKANK: I really hope this movie turns out well, I’m fairly psyched to see it! $20 million.

Godzilla: King of the Monsters

YODA: I heard King of the Monsters and assumed it starred Brie Larson. Thankfully no. $60

COMPUTER GUY: I want this to be good, but in the back of my mind, something tells me that there will be some ‘Progressive’ BS agenda in this film. $57 million

SKANK: The time has come! We’re finally getting King Ghidorah, Mothra, and Rodan in a big budget Godzilla movie! $55 million.