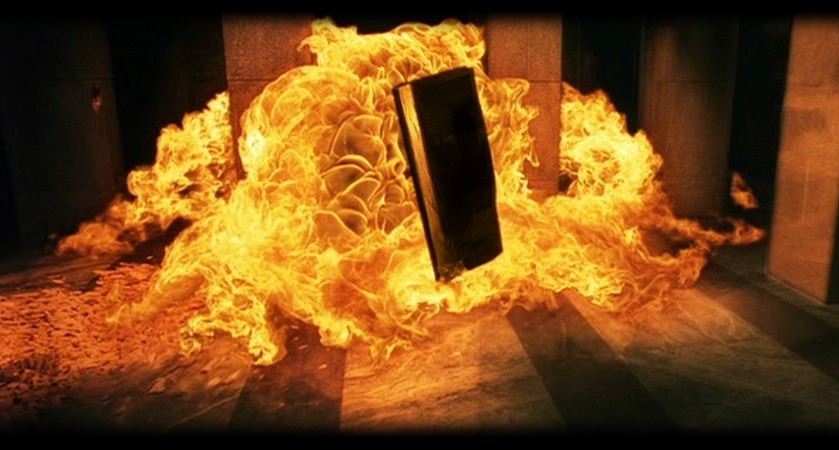 Most of us do not see explosions like this in real life outside The 4th of July or The 5th of November celebrations.

This is one of the main reasons we go to the movies:

This is not a ranked list and size doesn’t always matter… but it usually helps.

Some explosions are great because they take us by surprise.  Some are great because of damage dealt and we have a couple that are simply technical marvels of their time.  If you all have fun with this one then there will be more volumes!  Leave ideas below for future installments.  I have about 6 ready to go after these 12.

But let’s separate explosions from collisions and implosions.  So we’ll get to the A-Wing crashing into the Super Star Destroyer causing it to fall into second Death Star in another article.  That’s a beautiful sequence.

We should probably lump demolitions in with implosions as well e.g. Bridge On The River Kwai so that’s out.  So is “The Last Supper” from Alien.  That belongs somewhere but not here.

Remember that most explosions happen near the end, or at a critical moment of the movie so:

These are in no particular order, but let’s begin with largest…

A really great representation of time and perception while adequately marrying science and religion.

There’s a good discussion on the motivations behind this move here.

The question of whether the Alien Hunter was being a “sore loser” is an interesting one, especially considering the displays of honor shown in the sequel.  Did he purposefully give Dutch time to get away?  Was he actually laughing or did he just playback Billy’s laugh as if to say “Well done”?

It’s questions like this that make these movies and the alien hunter antagonist so interesting.

Big Trouble In Little China,  Suicide of The Storm

The Elemental Master, Thunder, has the ability to inflate his body in order to deflect projectiles.  But upon seeing his Master Lo-Pan killed, he commits suicide.  I wanted to give actor Carter Wong some credit for such a great build-up.  His emotional pain is both interesting and hilarious.  Maybe I just like seeing bad-guys cry.

Much like the Die Hard Trilogy, it is impossible to rank the explosions in this film.  This is still one of the best movies I have ever seen.  Many criticize it for not having enough character development, but I think that this movie conveys deep characterizations by showing us the many ways that individuals react to death.

This is a perfect example of that.  So it’s on the list.

Not much to say here except that I always did like the addition of the “Praxis Effect” energy-wave in the special editions, even if some of the other changes weren’t so great.

I love this movie, and it starts out with a BANG.  “The Praxis Effect” is pretty standard now for big-object explosions, and it all started right here.

“Not only is this shot sensationally effective in terms of the story, but as a visual it is exhilarating: I love it when a director finds a new way to show me something.” ~Roger Ebert

It is impossible to choose the best explosion from the Die Hard Trilogy so I went with this one.  Each of these films promises things that go boom, but I have to agree with Roger Ebert that this one, in particular, is technically marvelous, even with some of the composite and lighting issues it is a very well done for 1990.

Special mention has to go to the “Yipee ki-yay” fuel-fuse finale, so out of all the Die Hard films, I think this first sequel had the most inventive explosions.

Akira,  The Paroxysm Of Tetsuo

This movie is bat-shit crazy and heralded the coming of Japanese animation and story-telling as a favored art-form in The West.  If you’ve never seen the film you might want to bail now and find the original version.

When this movie came out it was awesome.  It didn’t age that well but the alien attack is still rather stunning.  Producers were initially very hesitant to feature the now-iconic White House explosion, but luckily it made it into the film.  It isn’t fun to watch, but it sells the villain a whole lot better than killing Han Solo did.

Other than the mind-blowing narrative and several wonderful set-pieces and explosions throughout, this was the biggest visual takeaway I had as I walked out of the theater.  The effect on me still rings in my head.  It was the first time I ever saw fire in slow-motion.

Check out this great interview with the two guys responsible here.

“For Sarah’s nuclear nightmare scene, Robert and Dennis Skotak of 4-Ward Production constructed a cityscape of Los Angeles using large-scale miniature buildings and realistic roads and vehicles. The pair, after having studied actual footages of nuclear tests, then simulated the nuclear blast by using air mortars to knock over the cityscape, including the intricately built buildings.”

So What if scuba tanks will not explode when shot?  It’s one of those changes from the book’s ending that just works better on film than dying from extensive wounds.

Spielberg made a great decision here when he changed the script.  And God-bless Bill Butler for devising equipment that could film on the open ocean.  This is a killer ending to one of the best and most difficult films ever produced.

There’s a cool dozen for ya.  Let’s hash it out downstairs in the comments and get Volume 2 going.

Hope you enjoyed this as much as I did!

More From The Ten