Unlike other site’s writers who are geek-heads about every single pop culture subject and PhD-level experts on all things comic book, I am not.

I happily claim ignorance and, in fact, I am having one helluva good time learning about the incredible worlds contained in the thousands of comics which have seen publication.

FilmGoblin is a site for everyone, at any level of pop culture knowledge, so I hope there are some other comic book neophytes out there like me.

If you’re a comics expert, I hope you enjoy my work as a layman’s-point-of-view refresher.

I haven’t held many comic books in my hands, but thanks to the magic of the internet, I can learn and share my learning with you.

The lip-service fools at Lucasfilm, Ltd. and Disney like to harp on how big the Star Wars universe is, with infinite stories to tell, yet they’re hamstrung by the Jedi lightsaber and Mandalorian armor. Fuck it.

You want massive and deep? Open wide and get a load of Marvel Comics.

A great many creative people have lent their talents to the Marvel Universe, and as such, one subject leads to another, and another. It’s truly epic storytelling.

What began as an exploration of a Marvel location called the Savage Land has, once again, become something much more. Please go read that brief article and then come back here. I’ll wait.

As we’ve learned in in previous articles, the reality known as Earth-199999 is contained in the Marvel Cinematic Universe (and, if you believe Sony execs, Venom as well) while Earth-616 is everything within Marvel Comics. That’s as much background as you’ll need.

So, assuming the X-Men will become part of the MCU, what’s a convenient way to connect the dots for the average movie-goer from the established MCU movies to the Savage Land?

The answer I’ve discovered is Vibranium.

Simply stated, Vibranium is an ore that can absorb and hold energy. For example, kinetic energy, which would render an object in motion motionless.

However, it should be noted that in both Earth-199999 and Earth-616, Captain America’s shield is shown to deflect objects, rather than rendering them simply motionless:

It should be also noted that Cap’s shield is composed solely of Vibranium only in Earth-199999, while in Earth-616 it is composed of Wakandan Vibranium and, thanks to a metallurgy accident, True Adamantium.

Don’t You Know That You Are A Shooting Star?

The origin story of Vibranium on our planet, in Earth-199999, is that millions of years ago a meteorite made up of Vibranium plummeted to Earth, striking the continent of Africa.

The Earth-616 origin story is a lot more fun.

Another One Strikes The Dust

In Earth-616, the meteor strike of Vibranium ore wasn’t a clean, one-time event in Africa.

Another meteor, or perhaps a piece of the first, struck Antarctica.

Additionally, other much smaller pieces are theorized to have landed in many places on our planet.

In Africa, local tribesmen led by a man named Bashenga believed the Vibranium meteorite to be a gift from the gods. They proceeded to claim it and make use of it.

However, as they would soon learn, the gods must be crazy.

The radiation emitted from the Vibranium mound began to change some of their number, as well as the local flora and fauna. Following are three interesting cases.

A group of gorillas, native to the mountains nearby, were mutated and their white flesh imbued with the power to grant superhuman strength if eaten. The White Gorilla Cult of Jabari tribesmen sprang up, and as the Jabari were already worshippers of the gorilla-god Ghekre, these mutated animals were now revered by them.

Similarly, a local plant, which up to that point was common and unobserved, mutated and became known as the Heart-Shaped Herb.

By having the juices of the herb applied to their body, the bearer of the Black Panther mantle gains, amongst other things, enhanced speed, strength, healing, and fantastically heightened senses. They can see in the dark and hear an enemy’s heartbeat.

Here is a scene from Black Panther (Earth-199999), which presents the use of the herb a bit differently:

Lastly and tragically, some of Bashenga’s own tribe began to lose their minds even as their bodies became powerful. 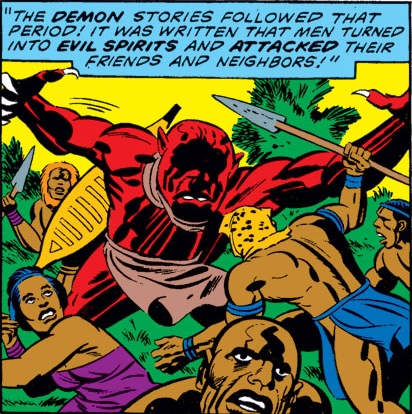 Dubbed “Demon Spirits” by the tribe, Bashenga prayed to Bast the Panther God for strength to defeat these demons.

Thus was born the Black Panther Cult, which worshipped Bast and tasked itself with protecting Wakanda and its alien treasure.

The Land Of Ice And Snow

And what of the Vibranium meteorite that landed in Antarctica?

Ah, stay tuned, for in the mortal words of Maz Kanata, “that is a good question for another time!”