In 2014’s Guardians Of The Galaxy, Marvel showed us that there is a vast universe out there, far beyond Earth and Asgard.

Indeed, in our exploration of The Nine Realms, we learned that there are also a great many races in the Marvel universe outside “known” space and the Realms proper.

And what can we say about Captain Marvel? Kevin Feige should’ve cast Kate Winslet as the lead. I heard tell that Kate has experience with big-budget, sinking ships.

Let’s take a look at one of those races now.

One of the oldest alien races in Marvel’s history — first appearing in 1967 in Fantastic Four No. 65, the creation of Stan Lee and Jack Kirby — the Kree were originally portrayed as particularly dedicated invaders, sending both robots and Kree soldiers as scouts to determine if Earth was ready to be conquered.

In fact, the first Captain Marvel was actually a Kree soldier known as Mar-Vell. A captain in the Kree military, Mar-Vell turned against his race by deciding to defend Earth against any alien intervention other than his own.

In the Earth-616 reality, Carol Danvers was born to a Kree mother and a human father. She later became known as Captain Marvel.

No Love For The Empire

The Kree Empire is far from the center of the Marvel Universe.

It doesn’t have a film. We haven’t been flooded with Kree merchandise. No one dresses as a Kree for Halloween. However, despite not being the center of attention, the Kree Empire has a rich history and Marvel Comics have dedicated a great deal of time to it.

Yet, luckily for you, we here at the Goblin have compiled some of the gory Kree details and put them all in one place!

Facts You May Not Know About The Kree

There are pink and blue Kree. The blue Kree are often known as “purebred” Kree, and are a small but powerful minority. Highly regarded among the species, they are usually seen as best fit to govern the empire and they take most of the positions of authority.

The pink-skinned Kree, sometimes referred to as white-skinned, have a similar appearance to Caucasian humans. They are the descendants of Kree that bred with other species in a set of experiments that attempted to kick-start their evolution.

The pink-skinned Kree are generally more durable than their blue-skinned counterparts and make up the majority of the terrifying Kree army.

Kree cannot breathe in Earth’s surface atmosphere. It seems that, for all their strengths, a major weakness takes the simple form of Earth’s atmosphere, due to the vastly different atmosphere on the Kree homeworld of Hala.

Kree females have special mental abilities. They have an innate ability to influence and control men by provoking intense feelings of desire. Additionally, some female Kree can drain the life force of others by kissing them.

Ronan The Accuser is one of the few Kree to appear in an MCU movie (Guardians of the Galaxy), which was the Kree’s big screen debut and featured both Ronan (Lee Pace) and Korath the Pursuer (Djimon Hounsou). 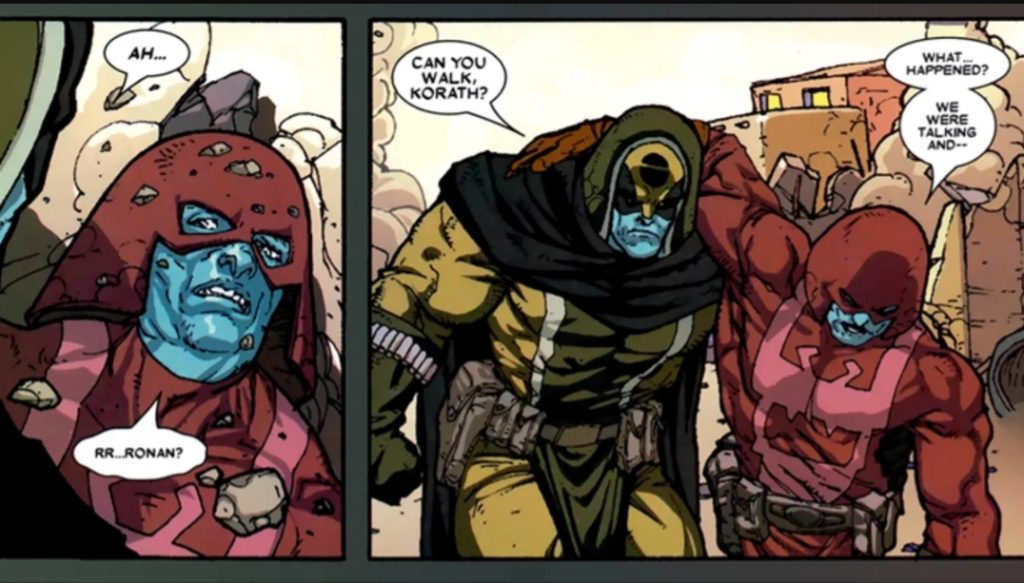 With the impending release of Captain Marvel, we are on the verge of witnessing another Black Panther, in terms of uproar and pandering alike.

Will Brie Larson be nominated for the Best Actress Academy Award? The hype surrounding this is surely greater than the movie itself. As they say, you can’t buy this kind of publicity.

Through it all, we here at the Goblin are steady like a rock in the sea, and we’ll take a closer look at more Kree details soon! Stay tuned!

Editor’s note: the concept for and the majority of text in this article are credited to Mother of Dragons. RIP.