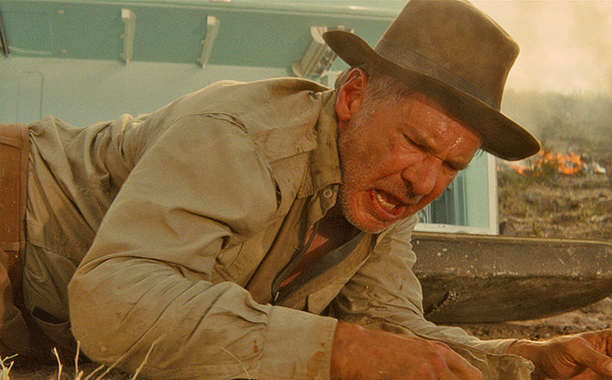 The term, “jumped the shark” comes from the episode of Happy Days when Fonzie—played by Henry Winkler— literally jumped over a shark on water skis. That happened in episode 3, of Season 5 of Happy Days.

There are also other ways that we can discuss shows that used to be great but strayed from the storyline. Movie series can also suffer from this phenomenon. Indiana Jones is one of those series. It can be argued — with some credibility — that the fourth film Kingdom of the Crystal Skull, didn’t happen.

In which case, “jumping the shark” is not an appropriate term. Instead, we need something more, robust to describe the loss of relevancy.

This is where the term “nuke the fridge” comes into play.

This comes from the last Indiana Jones film where he survived a nuclear blast by hiding in a lead-lined refrigerator, defying the laws of physics, common sense, and film relevancy.

In this case, when the fridge gets nuked, when the television series “jumps the shark” it isn’t immediately recognizable.

The Shows in Question

There are about television series from the last 25 years that could fit this definition. They are as follows:

Arguably the most iconic television show of the last 25 years, Friends was a show that resonated with many people (this writer was not one of them—I always was a Seinfeld guy) and had a wide audience. For this show to lose relevancy at an episodic, or seasonal level would indicate that it hasn’t been as great as everyone claimed it was during its ten-year run.

I would argue that Friends, nuked the fridge — and continues to do so — with its very presence in our popular culture as a phenomenon worth following. And now, to round it all out, there are Friends LEGO sets and even Friends in 4K on the big screen for the shows 25th anniversary. Friends nuked the fridge long ago but gets up and keeps right ongoing.

The show that always was either second, or third, fiddle to Seinfeld, Frasier, and Friends, Just Shoot Me starred a snarky David Spade, doing his best snarky David Spade impression. During its seven seasons, the crew at Blush magazine bagged models, explored the early beginnings of “woke” culture and looked aging directly in the face.

Just Shoot Me nuked the fridge with its rotating plotline of Eliot DiMauro and Maya Gallo’s on-again-off-again relationship throughout the show. Overall though, Just Shoot Me is a solid show which stumbled only in the writing of the relationships between its core characters.

In the realm of boring, pedantic cop procedurals (from Law and Order to Boston Legal), this show was a standout in its first three seasons. The Shield starred Michael Chiklis as Vic Mackey and resurrected The Commish star as something other than a warm and cuddly Fozy Bear character actor with thinning hair.

Bald, brutal, and beautiful, characters Vic Mackey, Shane Vendrell, Curtis Lemansky, and Ronnie Gardocki, explored every aspect of police corruption from cops selling drugs to asset forfeiture. To make matters even better, the show based its material on the real-life corruption of the LAPD’s Rampart Division.

The Shield began well enough, the first episode of the first season featured a cop-turned-informer getting shot in the face, but then, as the show progressed through its’ seven-season run, the moment it nuked the fridge was when the plotline of Vic Mackey barely getting caught kept going on and on.

And eventually, Forest Whitaker’s overacting couldn’t save the show, and the plotlines turned a convoluted corner in season five and never really came back to coherency. The Shield was a great cop procedural show that broke many rules, the main one being “don’t suck, and don’t nuke the fridge.”

What do you get when you create a drama that takes the conceit of Hamlet and translates it to the realm of Southern California Biker Gang culture. The initial idea is a great one with a lot of legs: A crazy mom hiding a surprise about paternity, a long-lost father never in the picture, a shady murder, and, of course, the politics of moving drugs, guns, and prostitutes while being a single father.

As time went on, the drama wore thin and plotlines became more and more tenuous. By season four, Sons of Anarchy was looking less and less like a biker gang show and more and more like a convoluted soap opera. And after a season where the SAMCRO Biker Gang was locked up for no logical reason, the show nuked the fridge.

Out of all the shows on this list, this one hurts the most. Arrested Development had three glorious seasons on the Fox Network and grew a cult fan base that was loud enough for Netflix to hear and listen to. Netflix proceeded to revive the show in an ill-fated and poorly designed fourth season.

And, as a huge fan of the first three seasons, the entire fourth season is a fridge nuking nightmare to behold: characters mugging at the camera, a convoluted storyline that forgot its roots, and a pointless method of storytelling that involved characters doing their own thing rather than interacting with each other.

Arrested Development was iconic in placing the entire sitcom conceit on its head, spawning shows like It’s Always Sunny in Philadelphia on the comedy radar, and breathing new life into the long-running shenanigans of Larry David on Curb Your Enthusiasm.  But this show nuked the fridge so badly I haven’t even watched the fifth season, half of which was released last year, half of which was released this year, to the sound of no one streaming it.

When shows nuke the fridge, it’s usually because the writing fails, or the characters behave out of context, or the show drags on too long (see Friends).

Usually, fans and TV critics (and television critics are sometimes the biggest homers for television shows that have already nuked the fridge, but aren’t willing to tell their audiences) aren’t the people who can most clearly identify when a show does so.

Usually, that’s best left to others with clearer vision.