Today we celebrate what would happen if you had $500.00 and found every 10th page from the 1st draft scripts of Alien and Star Wars in the trash.

This wonderful piece of crap, released on May 7th, 1982, was produced by Roger Corman and directed by Allan Holzman. Allan, who was an editor on Corman’s Battle Beyond The Stars, had some lofty ideas for this picture:

This project was originally envisioned as an outer-space version of Lawrence of Arabia(1962) by Allan Holzman. Roger Corman told him that the budget would be far too high, so Holzman eventually decided he wanted to do an Alien (1979) ripoff. Corman agreed to that.

Needless to say, Forbidden World was trounced at the movies that year by E.T. The Extra-Terrestrial, though both had exactly the same plot. 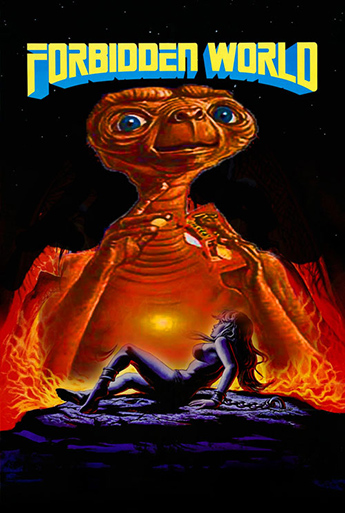 Bookmark Filmgoblin.com to stay in the know!