Exploring the origins of locations in the Marvel Cinematic Universe (MCU) was a great suggestion from Goblin editor Wolves and I truly found it more interesting than I ever thought I would.

Check out part one here. Read it, please, because this article builds on terminology and points established there. 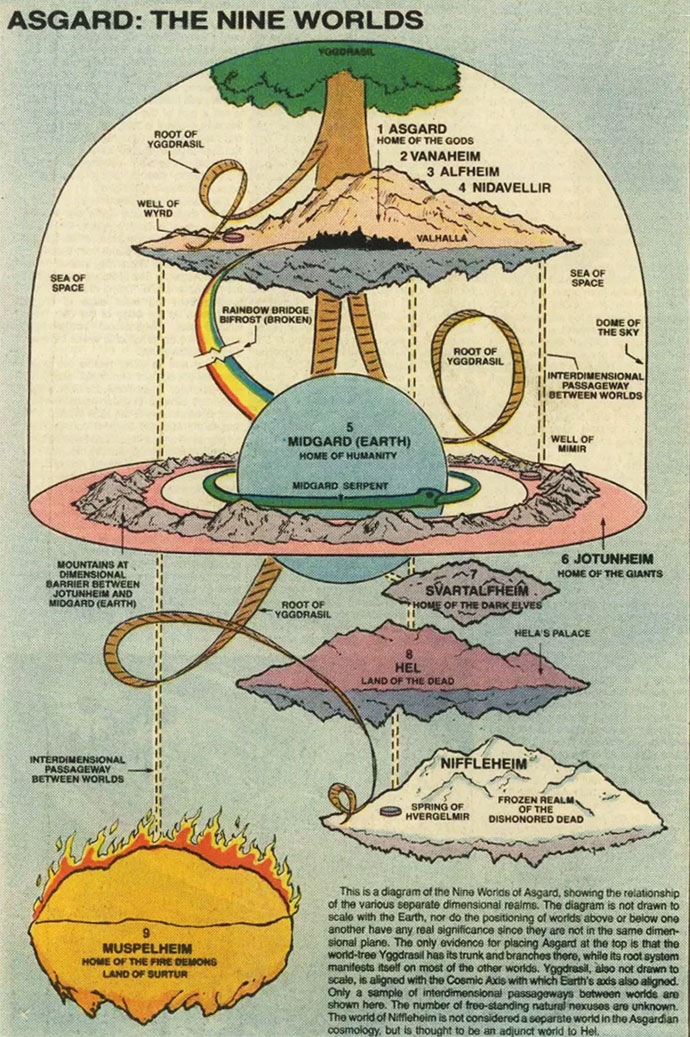 Neither of these terms are Realms nor regions, rather they are descriptors that are interesting in understanding the names of the various Realms.

Innangard describes that which is inside a fence or fortification, inside which is found civilization, law, and order.

Utangard describes that which is beyond a border or fortification, a wilder place of chaos and possibly anarchy.

Of the Nine Realms, only two have the -gard suffix: Asgard and Midgard. As such, these are depicted as being orderly places of science, law, and civilization.

This further seems to indicate that the remaining Realms are utangard places, wilder and less cultured.

As a side note, the suffix -heim holds the meaning of home or a safe asylum.

A nearly sunless planet which is suspended in the middle of Yggdrasill along with Midgard, the planet of Jotunheim is home to various races of Giants. Among these are the Jötunn Frost Giants, descended from Ymir the Ice Giant of the planet Niffleheim, who lost his life in battle with Odin.

More on Ymir shortly, below. Thus, there is a long standing enmity between the Frost Giants and the Asgardians.

In the reality of Earth-199999, Jotunheim is seen early in the MCU movie Thor, after Odin wages war against the Jötunn, defeating them and rescuing their infant prince.

A densely forested planet, Vanaheim is located on the highest level of Yggdrasill, along with Asgard. Odin’s uncle, Njord, left Asgard in order to settle Vanaheim, and his people became known as the Vanir, of which Heimdall comes.

Malekith the Accursed, of Svartalfheim, described this realm as, “filled with… enough trees to build a bonfire the size of the sun.”

Vanaheim as featured in the reality Earth-199999:

Of all the Realms, only two are mentioned as having portal access to Midgard. One is Asgard. The other is Svartalfheim, “home of black elves” in Old Norse.

Suspended in the middle of Yggdrasill, the planet of Svartalfheim is home to the race of Dark Elves and their spawn, Malekith the Accursed.

The thirteenth son of a thirteenth son, Malekith is of the Black Bile Clan. He was sold as a slave by his mother, only to escape and begin a life filled with dark deeds.

He is the main villain in Thor: The Dark World, seeking to use the Aether to plunge the universe into eternal darkness.

Take a look at this article for a brief look at Nidavellir and its place in Avengers: Infinity War.

Now, however, seems like a good time to talk about the accessibility and mapping of the various Realms.

For example, Nidavellir is located near the middle of Yggdrasill, along with Midgard. In Avengers: Infinity War, Thor takes a spaceship and travels to Nidavellir, along with a disbelieving Rocket Raccoon and Groot. This implies that Thor has coordinates to get there, and furthermore that it was within reach of a small spacecraft’s fuel supply.

I’ve read pages of data and various arguments suggesting that many of the Realms are not able to be easily mapped nor reached. This is because reaching them is some combination of science and magic, or at least some Asgardian science that is beyond human comprehension. Science like the Bifrost. A lightspeed rainbow bridge. Hmm.

The argument that made the most sense to me is that the Realms are thought to exist within teardrop-shaped folds of space-time. Imagine space-time as Yggdrasill, a giant tree. The Realms seems to be fruit, apples for instance, hanging on the branches, the apple stems themselves being portals/pathways into the Realm. A root system serves the same analogy for the lower-most Realms. With my severely limited understanding of mathematics, astronomy, and interstellar travel, that’s about the best summation that I was able to glean.

Also known as the Land of Eternal Fire, Muspelheim is home to the Jötunn Fire Giant Surtur, who along with Ymir, shares a distinct hatred of Odin and Asgardians.

Surtur as he appears in the reality of Earth-616:

Muspelheim is located on the lower levels of Yggdrasill, along with Niffleheim. These two worlds, according to Norse mythology, were the first two worlds to emerge from the primordial void known as Ginnungagap.

My research inclines me to view Alfheim as sort of a Disney World in space. It is located on the highest level of Yggdrasill along with Asgard.

Alfheim has been mentioned, but has not yet appeared, in the reality of Earth-199999.

Located in the lower-most level of Yggdrasill are Niffleheim and the region of Hel, which is ruled by Hela. Hel isn’t necessarily a place of eternal punishment, as it also contains the region of Elysium, although Niffleheim is a place of dishonored dead.

Ymir the Ice Giant is another character based on Norse mythology. Accordingly, Ymir was an ancient being from whose body Odin formed the Earth. Ymir’s blood became the oceans, his flesh the land. His brains and skull became the heavens.

In the reality of Earth-616, Ymir was created when warm air from Muspelheim surrounded tons of ice above Niffleheim and caused the ice to gain sentience. Ymir, along with Surtur the Fire Giant, is one of the oldest known beings in the Nine Realms.

Ymir does not appear in any MCU movies, yet he does appear in two video games set inside the MCU canon. Thor: God of Thunder and Thor: The Cash Grab– er, I mean Thor: The Dark World both feature appearances by the ancient Giant.

Second Star To The Right

Thanks for joining me on this quest for knowledge. I hope you’re enjoying reading it as much as I am enjoying learning about it. Please stay tuned for the next installment: a visit to Asgard!