Exploring the origins of locations in the Marvel Cinematic Universe (MCU) was a great suggestion from a Goblin editor and I honestly found it more interesting than I ever thought I would.

After all, I’ve avoided comic books all these years for a reason. Now I realize that I have a shitload of catching up to do, because, as I learned while writing To Knowhere and Beyond, there is some genuinely inspired world-building going on.

Truly, I got more than I bargained for with this one, because during my research I was confronted not only with the locations themselves but also the notion of space-time, the basics of interstellar travel, and Norse mythology.

Imagined as a cosmos-spanning ash tree, Yggdrasill, also known as The World Tree, supports the Nine Worlds nestled in its branches. Or, the Ten Worlds. However, you choose to look at it, which we’ll get into soon enough in this series.

Based on Old Norse mythology/cosmology, the moniker “World Tree” comes from the old Norse term askr Yggdrasils. Another interpretation of the name in Old Norse translates as “Odin’s horse” wherein “horse” means the wooden horse of a gallows.

The Norse story goes that Odin, in search of greater knowledge about the inner workings of the cosmos and the various worlds, first hanged himself from Yggdrasill and then impaled himself with his own spear. He forbade the help of any other god and hung there for nine nights, staring downward and awaiting an awakening of knowledge, which he received. 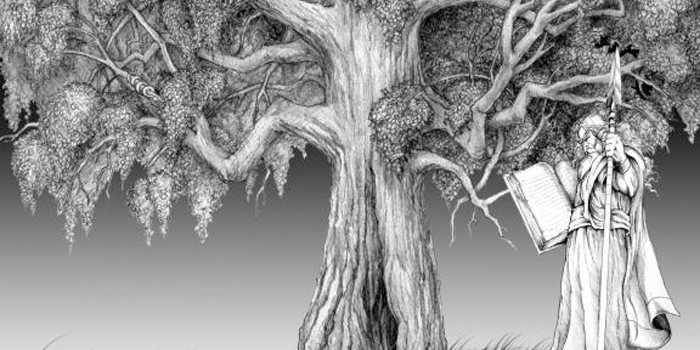 I know that I hung on a windy tree nine long nights, wounded with a spear, dedicated to Odin, myself to myself, on that tree of which no man knows from where its roots run. No bread did they give me nor a drink from a horn, downwards I peered. I took up the runes, screaming I took them, then I fell back from there. Well-being I won, and wisdom, too. I grew and took joy in my growth; from a word to a word I was led to a word, and from a deed to another deed.

What a verse, and truly, what an inspiration for the masterminds at Marvel Comics.

Stan Lee felt that Greek and Roman myths were more well known to the general public, so he went with Norse mythology when he needed a hero to punch up a forthcoming issue. Behold, Thor.

The branches of Yggdrasill hold the Nine Realms, and its roots tap into three wells: Urdarbrunnr, Hvergelmir, and Mímisbrunnr.

In the MCU, Yggdrasill is a viewable phenomenon that connects the Nine Realms of the cosmos. Listen as Thor drops knowledge on this h- uh, on Jane:

And here is a glimpse of the World Tree during the end credits for Thor:

It’s truly a beautiful depiction of our universe and the ways in which it functions.

That’s Earth to you and me. Or, more specifically it’s the Marvel comics version of our planet called Earth-616, which is the seventh incarnation of a version of reality that includes us and our history as well as the Marvel heroes, villains, and locations.

Confused? If you’re a comic book fan, probably not. Me? Yeah, I was a little confused.

First off, we can largely forget the first six incarnations. The seventh is where we are now, although some would say it’s the eighth, for fun let’s say it’s the seventh.

This present seventh incarnation of Earth-616 began with the creation of Galactus.

Midgard And The Birth Of Galactus

Galactus was “born” when the Sentience of the sixth incarnation of the universe, the Sixth Infinity, merged its essence with a humanoid space explorer named Galan, of the paradise planet Taa.

Knowing the cosmos was nearing its end, the Sentience approached Galan as he and the survivors of Taa, fleeing the destruction of everything around them, piloted a ship toward the center of the universe which was known as the Cosmic Egg.

The heat and radiation generated as the cosmos collapsed into the Cosmic Egg killed all passengers aboard the ship… expect for Galan, who now found himself in possession of the unfathomable power of the Sentience.

Thus, Galactus was created, and he survived the collapse of the sixth cosmos and the ensuing big bang of the Cosmic Egg as the seventh cosmos sprang into being, leading to the reality known as Earth-616.

The MCU version of Midgard is known as Earth-199999 and made its debut in Iron Man, the first MCU movie. As with Earth-616, Earth-199999 includes us and all our history as well as the MCU heroes, villains, and locations.

As in the comics, Midgard exists near the middle of Yggdrasill. The various beings of the Nine Realms call our home Midgard, while, interestingly enough, Earth is known as “Terra” to beings from beyond the Realms.

What is unknown at this time is whether or not Galactus and his origin will figure into the MCU. Only time and Disney lawyers will tell.

Second Star To The Right

Thanks for joining me on this quest for knowledge. I hope you’re enjoying reading it as much as I am enjoying learning about it. Make yourself comfortable, because we’ve got a lot of cosmos to cover.