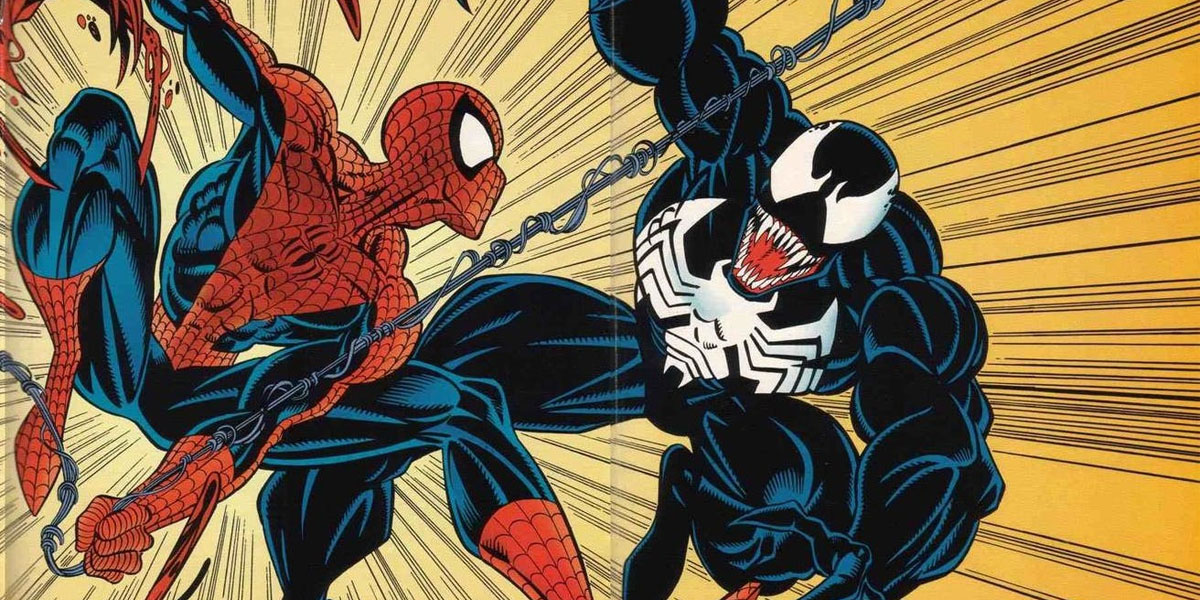 Maybe he was visiting his friend Tom Hardy. Perhaps Holland wanted one of those awesome chalupas from craft services. Let’s face it…nobody really knows what he was doing there.

“Tom Holland in Venom? Could it be true?”

As you’d expect, the principal production partners Sony and Marvel aren’t saying anything. Since there are no actual facts to talk about, let’s spout random internet speculation! Film Goblin’s Razzbender already had his take.  Now it’s my turn.

I say…Tom Holland in Venom? Why the hell not!

Spider-Man In The MCU

Kevin Feige has already defined Tom Holland’s involvement in Sony Pictures movies. Per Feige, Holland would only appear in movies which Marvel co-produced. That means that the Sony produced spin-offs would be off-limits for Spider-Man.

Back then, we knew only about the long-rumored Sinister Six movie. That movie is no longer happening. Since then, Sony has put Silver & Black and Venom spin-off movies into active production.

Feige’s original stance seems pretty logical. Marvel/Sony agreed on a younger dude (Tom Holland) to play Peter Parker/Spider-Man. They have planned out a longer arc for the character, which they can stretch across many films.

Feige has Spidey stories that he wants to tell, and that is his primary goal. Since Spider-Man is Marvel’s most cherished property, Feige wants to protect it, and “do it right”.

Sony has had a mixed reception to their handling of Spider-Man. The first two Raimi movies were unquestionable triumphs in critical and box office terms. The Andrew Garfield movies… not so much.

The tone of the Spider-Man characterization should be relatively consistent across movies.

Sony’s announcement of Hardy’s involvement shook up the internet. Before this, it would have been easy for Disney/Marvel to ignore these spin-offs.  But the inclusion of Hardy makes this property an interesting property again.  Would Hardy sign on to any old comic book movie if the script/property sucked?

Hardy’s one of the best actors going nowadays.

He has his pick of projects and wouldn’t be doing this unless he KNEW it had the chance to be special, right?  Further, Hardy’s involvement helped Sony attract other interesting names. Michelle Williams, Jenny Slate, Riz Ahmed, to name a few.

Earlier, I thought the Venom standalone movie project was a very dumb idea. Now that I have seen the talent attached, and I am much more bullish.

Kevin Feige has done an incredible job of managing the Marvel properties over the past ten years.  Feige is capable of seeing a long-term goal, and knows how to get there with small steps.

He knows how to play the long game.

Feige understands that the Spider-Man film rights are not going to revert back to Marvel in his lifetime. He was very wise to make the “sharing” deal with Sony when he did.

The pillars of the Marvel Cinematic Universe are going to be moving on shortly. Robert Downey Jr. , Chris Hemsworth, and Chris Evans’ contracts are up.

Thanks to this sharing deal, fans were able to see Spider-Man fight Captain America in a movie. They were able to see Tony Stark hit on Aunt May. Through this arrangement, Sony enjoys association to the larger Marvel Universe.

Everybody profits…Disney, Sony, and most important…the fans.

Feige’s other great strength is giving fans what they want.  He knows that fans want to see all the Marvel characters together.

Feige likely convinced higher-ups that the Marvel Fox characters could fold into the MCU. Those characters could be very profitable for Disney. Production on these Sony spin-off films has already started.

It makes sense for Feige to try and get Marvel involved as much as possible in them.  He very likely cannot prevent Sony from making these films.  What he *can* do is control the use of Holland/Spidey. Since the train has already left the station, he might as well jump it.

Tom Holland In Venom?  Why The Hell Not!

It makes a ton of sense for Feige to allow Holland’s Spider-Man to appear in these Sony spin-offs.

First, it’s good business sense. Spider-Man’s addition will definitely help the box office performance of these spin-off films. Disney and Sony are, in essence, partners on the Spider-Man property, whether they like it or not.

Second, it’s the right thing to do from a creative point of view.  These characters were all spun off of the Spider-Man comic books. It’s only fair that Spider-Man (the character) appears in these films.

Third, Feige wants these spin-off films to do well.  The rising tide raises all ships.  Nobody wants this comic book movie era to end.  Large comic book franchises can be incredible profitable for studios when done right. The roles can be very lucrative for the talent involved.

There are tons of great comic stories that have yet to to be shown on the big screen. Disney already has a ton of Marvel characters in their catalog. When the Fox deal gets approved, they will have tons more. Disney will have more Marvel characters under their roof than they’ll be able to make films for.

Disney should support Sony in making these spin-offs. Don’t ignore them, or trust that audiences are smart enough to separate “universes”.

Even “loan” other Marvel characters to Sony as-needed. Let the Sony movies take place in the Marvel Cinematic Universe, and tell great stories that are faithful to the comics when doing so.

Sony, let Feige keep an eye on what you’re doing, and LISTEN TO HIS NOTES. The dude knows what he’s doing.

There’s too much money involved for studio or producer egos to get involved. Too many great stories to tell on the big screen. Goodwill has already been established between these studios.  Hopefully, your shareholders are pleased with the early results.

There’s so much more that can be done, and a rich universe for all partners to share.  Work together.  Don’t screw it up, guys.