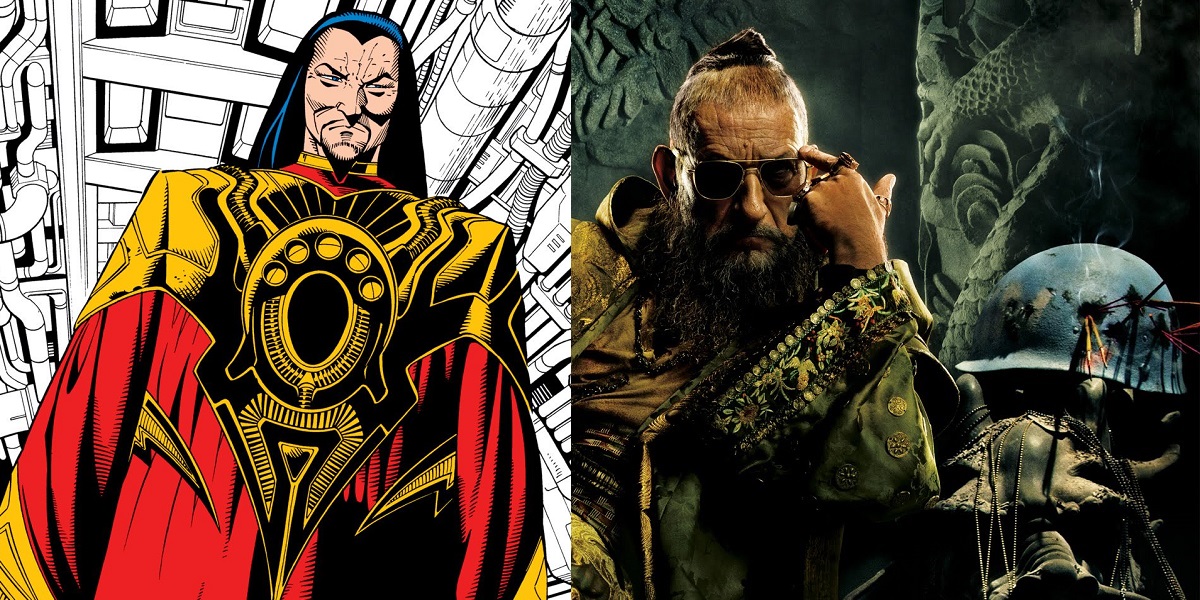 Iron Man 3 is one the most divisive films in the MCU, the chief reason being the twist on the character of the Mandarin.

Marvel essentially apologized for this when they created the Marvel One-Shot: All Hail the King. The short film is about an interview with an imprisoned Trevor Slattery (Ben Kingsley), the actor who played as Mandarin in terrorist videos. At the end of the short we learn that there is a real Mandarin out there and he was also displeased with being impersonated.

So, does this mean the proper Mandarin could actually come to the MCU? There are several issues to address, but let’s look at them and propose a possible way of bringing the character to film.

Dealing With The Past

When Marvel Studios released Iron Man in 2008, the character of Iron Man was considered a C-list superhero. While the Mandarin is considered the classic archenemy for Iron Man, he was also considered low-tier. This perhaps helped with the decision to change the character into a fabrication in the third movie.

The Mandarin was just a part played by Trevor Slattery and a concept that villain Aldrich Killian (Guy Pearce) used to advance his goals. Not everyone would have seen the Marvel One Shot, but it would not be hard to explain that Killian ripped-off a legend that was actually based in reality.

The other issue with the Mandarin is that originally he was a “Yellow Peril” supervillian. Marvel has a number of characters from the 60s that would be controversial today. The studio made their best attempt to deal with problematic characters in their casting of Tilda Swinton as The Ancient One and changing Wong’s role in Doctor Strange.

In the case of Iron Man 3, the choice was to have a non-character.

So, with the real Mandarin, what would be the best way to re-calibrate the character and deal with the inherent cultural landmines? Why, make the Mandarin into Fu Manchu.

Use A Racist Stereotype?! That’s A Horrible Idea

Did you know that Fu Manchu was actually a character in Marvel Comics? He was the father of the titular Shang-Chi, Master of Kung Fu. Characters from Sax Rohmer’s Fu Manchu series of novels, like Denis Nayland Smith and Fah lo Suee actually appeared in the comics as well. When the comic was canceled Marvel lost the rights to the characters. If Marvel wanted to use Shang-Chi’s father an alias had to be used, often as Mr. Han.

In Secret Avengers, Fu Manchu is finally revealed to be an ancient sorcerer named Zheng Zu. The Mandarin from the comics gets his power from ten rings found in the wreckage of an alien ship.

The origin could be similar for this proposed MCU Mandarin or it could be re-imagined as a hybrid of alien mystic arts and technology. Zheng Zu and the Mandarin are both similar characters and it would not be the first time that Marvel combined characters or grafted concepts onto another.

So why make the Mandarin as Zheng Zu (which really side-steps the problematic Fu Manchu issue)? Because, it allows Shang-Chi to enter the MCU.

When Marvel first put together their financing to start their own studio they had to use the film rights of ten properties as collateral: Captain America, The Avengers, Nick Fury, Black Panther, Ant-Man, Cloak & Dagger, Doctor Strange, Hawkeye, Power Pack, and Shang-Chi. The idea was that these properties would make up the film slate. Clearly, a lot changed since then (Iron Man’s rights reverted to Marvel, separate from the financing deal, and started the MCU), but Shang-Chi was seen with big screen potential.

When Iron Fist was starting up on Netflix there were calls for the character of Danny Rand to be cast/re-imagined with an Asian in the starring role. Of course, that could lead to cries about type-casting Asians or stereotyping and cause more issues. But, Marvel Studios has been very smart about these things and if the people who were clamoring for representation with Iron First really wanted an Asian martial artist, maybe the world is ready for a Shang-Chi movie.

Aside from the possibility of box office appeal in China, a Shang-Chi movie would continue to push Marvel as they try to tackle new genres. A cinematic Marvel martial arts movie could be promising. This would also tie the Mandarin to the future instead of Robert Downey Jr.’s Iron Man, who will eventually have to retire from the films.

Dealing with the Future

So there you have it. Make the Mandarin the father of Shang-Chi in the MCU. Shang-Chi’s story is quite simple; he thinks his father is benevolent, but finds out the truth and turns against him. This could allow Shang-Chi to be an antagonist in another MCU film and get the origin and exposition out of the way, much like how Black Panther was used in Captain America: Civil War. Once Shang-Chi becomes a hero his father can be used as a background threat or major villain in the MCU.

Also, by making the Mandarin just another alias it would not be confusing for the audience, more like an Easter egg than plot point. It clicks with Marvel One Shot: All Hail to the King and allows for those Ten Rings references in Iron Man and Iron Man 2 to play as intended. It’s actually a bit of a messy retcon to assume Aldrich Killian was really The Mandarin all along. Since Marvel planted this idea of the real Mandarin they should entertain the possibilities.