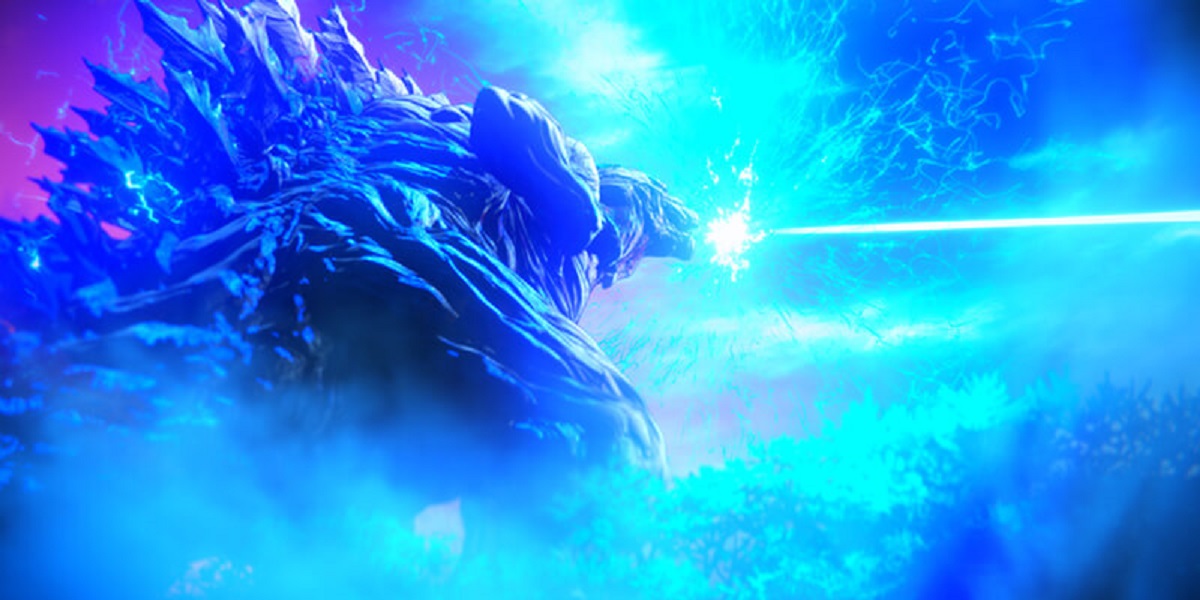 Netflix has released Godzilla: Planet of the Monsters – Gojira: Kaijū Wakusei (literally Godzilla: Monster Planet) two months after its theatrical release in Japan. It’s not a groundbreaking film, but it sets itself apart from the series, and the genre, both in substance and style.

Godzilla: Planet of the Monsters is Toho’s 30th Godzilla film (the 32nd for the series including the two American productions). It’s the first in a trilogy and is the first animated entry. As far as I can tell, this choice was made because the contract with Legendary Films forbids Toho from making a live action film while Legendary has a film in production. Toho had great critical and financial success with 2016’s Shin Godzilla, so an animated film could build off that and the format also providers the opportunity to reach a different, younger audience. This choice also allowed the series to explore new ground with the freedom animation affords.

Godzilla films are considered sci-fi and have had various tropes such as space ships, aliens, time travel (and obviously monsters) throughout the series, but this film is science-fiction more in concept than previous films. It’s a sci-fi movie that has Godzilla in it. That isn’t to say that Godzilla is superficial or feels out of place.

The set-up is that monster attacks started in the early 21st century which culminates with the arrival of Godzilla. Two alien races visit Earth, the Exif and the Bilusaludo, but their offers for help and salvation are not enough. A select few humans and alien refugees ultimately evacuate Earth in hopes of finding a new home on planet Tau Ceti-e.

The stakes for humanity have never been like this before in a Godzilla movie. Usually the threat plays like a natural disaster. If there is a race to stop a catastrophe or alien invasion we know that it will be stopped by the end of the film. Planet of the Monsters poses the simple question, What if the monster won? It’s a premise that has not been explored in over sixty years in the giant monster genre.

The story starts with humanity in a dire situation aboard the ship Aratrum. After a significant loss of population and dwindling resources the ship finally completes its 22 year mission. The planet is found to be far less hospitable for human life than expected. Before this can even be tested the landing shuttle explodes entering the planet’s atmosphere. Humanity is lost and demoralized, finding their quest to be a fool’s errand.

The film takes its time to set up the scenario, so those who were hoping for monster action will have wait. We get a feel for the plight of the population aboard the ship and the workings of the Central Committee. It’s implied that the doomed landing shuttle was filled with the elderly for cynical reasons. People have lost their way literally and spiritually.

The protagonist, Captain Haruo Sakaki is arrested when he tries to stop that first landing on Tau Ceti-e. Haruo lost his parents to Godzilla as a child as they tried to board the Aratrum and then his adoptive grandfather is lost in the shuttle explosion. He has a rather simple back-story and motivation, yet his drive to take back the Earth from Godzilla makes him compelling. Films in the series have had characters seeking revenge against Godzilla before, (1994’s Godzilla vs. SpaceGodzilla and 2002’s Godzilla Against Mechagodzilla) but they felt more like tacked-on character motivation. In Planet of the Monsters it’s central to story’s conflict.

The alien races accompanying humanity play provide a twist to the formula. Usually aliens in Godzilla movies are antagonists, but here they are presented as companions aiding humanity in co-exile.

The Bilusaludo are skilled in design and engineering. They constructed a Mechagodzilla back on Eath, but it was not able to be activated successfully. They helped with the design of the weapons used to fight Godzilla. They are clearly inspired by the aliens who created Mechagodzilla in the last two entries of the original Showa Godzilla series (1954-1975). The Bilusaludo even have the same back-story of a home planet lost to a black hole.

The Exif are based on the aliens from Planet X in Invasion of Astro-Monster AKA Godzilla vs. Monster Zero (1965). In the classic movie, the aliens were ruled by computers, but the Exif have more of a religious belief based on their computer’s complex calculations.

An Exif named Metphies is really the only other interesting character presented. He feeds Haruo data on Godzilla to research a weakness and subsequently leaks the information, setting the return to Earth in motion. Metphies is a guiding hand in the background throughout the story, right up to the battle with Godzilla. The Exif computer is mentioned to let them predict the future, so Metphies may actually be more an instrument of fate rather than helping Haruo of his own will.

As a side note, early on there is a bit of exposition between Metphies and a Bilusaludo alien named Mulu-Elu Galu-Gu. They discuss how if not for Godzilla each of their respective races had more nefarious plans for Earth. It’s possible this may be planting something for later in the trilogy, but it also is a fun nod to how the film does something different with aliens.

A Sort Of Homecoming

After being gone for 20,000 years the Earth has changed drastically. The landscape is alien, covered with strange metallic plants. Here the advantages of the format shine. The world design is intriguing. Godzilla has affected the entire ecosystem. The plants and animals share some of Godzilla’s attributes. I had heard that this incarnation of Godzilla is plant based. I know that ancient trees were referenced when designing the look, but this is never truly stated in the movie. It appears that Godzilla is a synthesis of animal, vegetable, and mineral; the ultimate life form.

There is a great moment where Haruo, newly released from jail to oversee the plan to stop Godzilla, and a group come upon what looks to be ruins. They are fossilized lichen which grew on the remains and kept the shape of buildings. It brings to mind the famous last scene in 1968’s Planet of the Apes. Indeed, Haruo breaks down. It is not in despair as in Apes, but as a sign that humanity was there and can return. Under the surface of revenge, Haruo is also fighting for the salvation of humanity.

We finally get some monster stuff when the landing party is attacked off-guard by flying creatures. The monsters (dubbed Servum, but never named in the film) apparently share part of Godzilla’s genome, but aside from color and their bark-like texture it would be hard to guess. For Toho’s first new monster since 2004’s Monster X, they aren’t terribly inspired. The monsters are easily dispatched, but not without causing some serious damage and casualties.

The Once And Future King

Finally after more than 50 minutes of running time we get to see Godzilla. The King of Monsters is still a divine force of nature, but there is no real connection stated the usual nuclear test origin. The design is similar to the look of Legendary’s Godzilla (2014), a similar shape, bulk and face. The dorsal fins have a leaf-like quality, fitting in with the plant aspects of this incarnation. Godzilla is noted to have organs, but giant fibers compose the body mass, supporting the great weight and height of the monster.

The production is great in the design of the weapons used against Godzilla. The live action films have been largely restricted by the use of models. Here we get walking tanks and power-suits. These sound like usual anime fare, but are actually more grounded than some of the fantastic maser tanks and laser weapons that sometimes appear in Toho’s science-fiction and monster movies.

The climactic battle involves attacking Godzilla at a precise shields-down moment and lodging EMPs into Godzilla’ body. Just as the story focuses on the human side much more than in previous films, the final assault does as well. The characters are directly in the conflict as hoverbikes zoom around Godzilla body and power-suits lunge forward. The final fight spans for an exciting 20 minutes.

Godzilla: Planet of the Monsters makes some pretty radical changes for Godzilla, even more than Shin Godzilla, but it’s refreshing mix. For a series that’s been around for over 60 years it’s easy to fall into a formula or look too much to the past.

The only real criticism is that the film has a very abrupt ending. There is a post credit scene to give us a little bit of an idea about where the story goes, but I would have liked some more resolution.

Even if you aren’t a Godzilla fan, it’s a fine science-fiction story on its own. This is a worthy entry in the series. I went in without any real expectations and was surprised with how entertaining it was. Not a Top Five Godzilla film, but definitely above average and worth a watch.

For more of our honest opinions on movies and shows check out our other reviews.