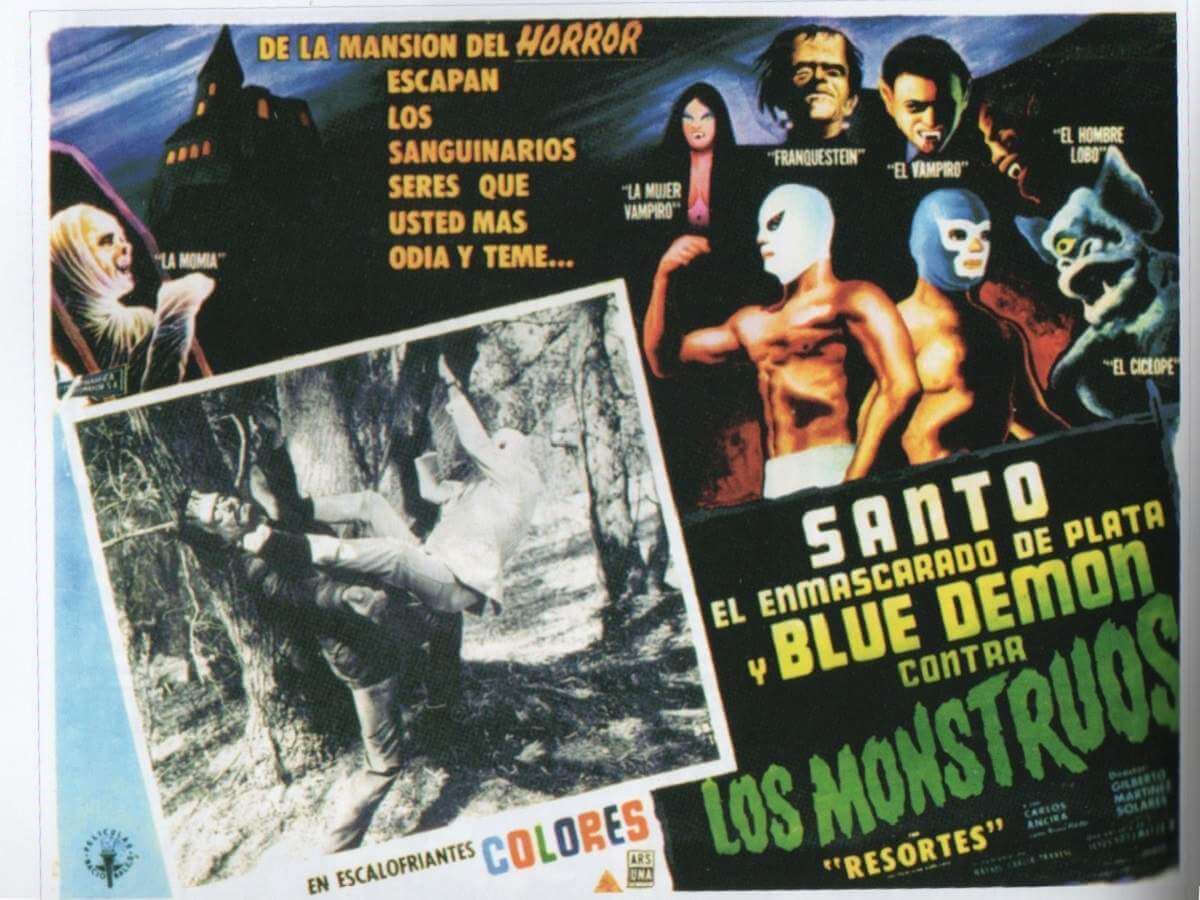 Who Was That Masked Man?

Santo, The Man in the Silver Mask (Rodolfo Guzmán Huerta), is one of the greatest Mexican pop culture icons. He started his career as a masked wrestler in the mid 1930s and in the early 1950s began to star in his own comic. He debuted in films soon after and became a bona fide superhero. Spanning over 50 films, Santo fought monsters, aliens, enemy spies, and mad scientists.

Part of the charm of the films is seeing the masked Santo at home or out on the town. It’s also funny how he still has to go to his wrestling matches while he deals with his antagonist(s). Art imitated life, as Santo never took off his mask (except for a television appearance, a week before his death) and refused to let his film career stop him from wrestling.

Another notable reoccurring feature is the appearance of Blue Demon. In the ring Blue Demon was the only opponent to best Santo. In the films they would be allies, but usually there was a contrived reason why they would have to fight. This would play up the real-life rivalry. Santo and Blue Demon Against the Monsters is a perfect example of the formula.

The movie starts with, what else, a wrestling match. After padding the film with lady wrestlers we get to see Blue Demon in action and Santo watching in the back. The story starts in earnest when the body of the recently deceased Dr. Halder is taken from his grave by zombies and a hunchback midget.

Blue Demon just happens to see the horse-drawn hearse carrying the doctor’s remains while driving on vacation. Blue Demon follows them to a castlel (opens in a new window)   and watches as Dr. Halder is revived by his minions. Blue Demon is captured and the doctor creates an evil clone to battle Santo.

Dr. Halder’s plan is simply to kill people, specifically his brother and niece (who happens to be Santo’s girlfriend, Gloria) because they called him crazy. Santo easily stops an attack by fake Blue Demon and zombies. This leads to Dr. Halder reviving monsters and putting them under his control. He sends them out to rampage and kill.

The monsters are a great lineup. The Vampire is a pointy eared fellow in a top hat, who later creates The Vampire Woman as a honey pot trap for Santo. Frankenstein’s Monster is dubbed Franquestain. Frank (or should I say Franq?) looks like the Universal version of The Monster with a Fu Manchu goatee glued on. The Wolfman seems like a transient with fangs. The Mummy is frail geriatric who just shifts about. Any actual fighting by the Mummy is done by a completely different-looking body double. The best monster of all is The Cyclops. Using a leftover suit from another monster movie, it rounds out the roster perfectly with rubber suit monster action.

A Winner is Santo!

After Santo saves Gloria and her padre for the fourth time or so, the mad doctor decides to fight Santo in the ring. The Vampire disguises himself as a masked challenger. As always, Santo takes time out from saving the world for a wrestling match. Santo almost loses, but thanks to Gloria’s crucifix necklace the Vampire flees. In one of the film’s highlights, the other monsters and fake Blue Demon suddenly appear and jump in the ring for more punches and throws.

After the melee Santo decides the best course of actions is to take Gloria and her father out to dinner and a show. It’s quite obvious the show is just footage from another movie.

They are attacked again and the battle moves to the rooftop where the monsters finally succeed in abducting Dr. Halder’s brother and niece. Hilariously, Franquestain drives the getaway car! Santo manages to chuck The Mummy off the roof and gives chase in his sports car.

Dr. Halder gets his moment to gloat, but soon Santo arrives and rescues Blue Demon after killing the fake one. With the two masked wrestler teaming up we get the final smack down. The hostages are saved, monsters are vanquished, and the lab is destroyed.

If you like B movies or monster movies, Santo and Blue Demon Against the Monsters is a great watch. The poor budget is quite apparent. Scenes will jump from day to night and back and there is stock footage and scenes are reused. For a Santo film, it’s actually a little violent. It’s implied that the Wolfman kills a child and Franquestain steps on a youth’s head.

The premise of masked wrestlers as superheroes works because everyone plays it straight. Things don’t make sense, yet somehow Santo sells us this surreal world. This particular entry never gets dull and hits that sweet-spot for a bad movie, funny and fun. There are more in the series, if you like what you see. A handful of Santo films were dubbed into English with Santo changed to Samson (riffed on Mystery Science Theater 3000) and some can only be found in Spanish. This was released with English subtitles and is definitely worth seeking out.