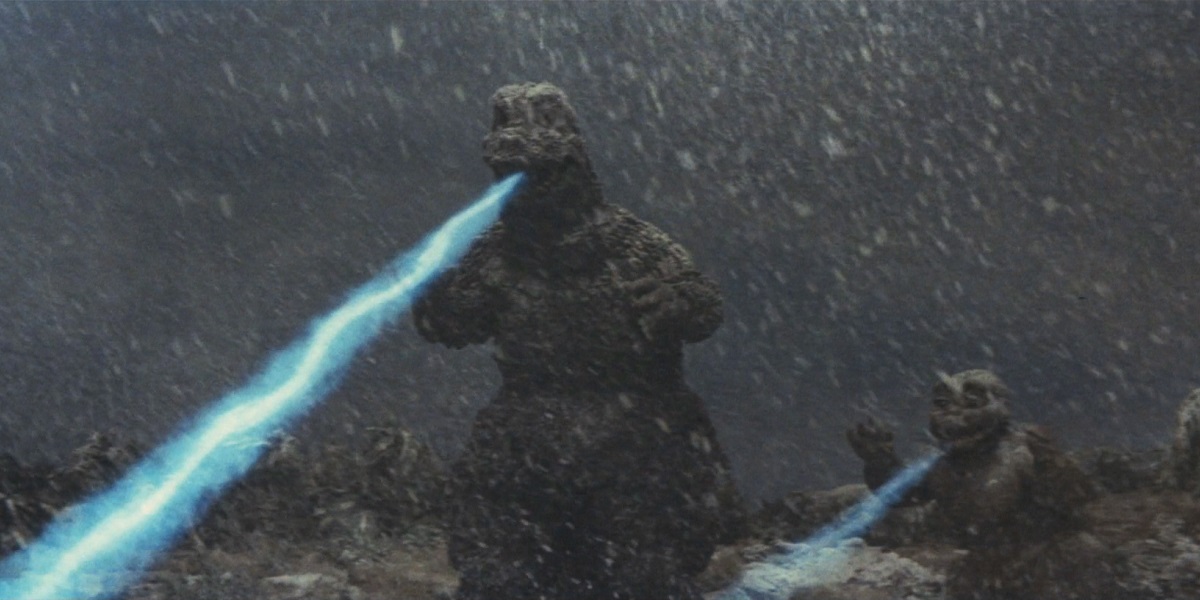 Son of Godzilla: Kaijushima no Kessen Gojira no Musuko (1967) may not be the most beloved entry in the series, but in the celebration of Father’s Day, let’s take a look at how becoming a dad affected a film franchise and a movie icon

The story begins with a group of scientists, lead by Dr. Kusumi. They are working on secret weather manipulation experiments on Solgell Island. Progress is difficult given the heat and isolation. Also the island is populated with man-sized mantis creatures.

A reporter named Goro Maki parachutes in to get an exclusive story. He discovers a native girl living on the island before the test starts, but the others don’t believe him and don’t want to delay the experiment.

At the crucial moment interference causes the test to go wrong and the weather balloon detonates early, causing a radioactive storm. This results in damage to the island and the mantises to grow in size. The mantises, dubbed Kamacuras, locate the source of the interference, a buried egg. The unborn baby Godzilla calling to its parent.

Godzilla soon arrives and saves the hatching baby, who is never named in the movie, but is called Minilla (The English dub of All Monsters Attack AKA Godzilla’s Revenge called him Minya, which may be more familiar to some). Godzilla soon starts to teach the tot the basics of being a monster.

The native girl survives the storm and befriends Minilla. She also finally meets up with the scientists and it is revealed she is actually Japanese. Saeko (Reiko or Riko in the English dubs) was the daughter of an archeologist who passed away years earlier. She proves instrumental to the group’s survival when she provides a medicine and shelter.

The scientists try the weather experiment again in order to freeze the monsters and escape. As the snow starts to fall Godzilla is in a high stakes battle with the giant spider Kumonga to save his son. Kumonga is vanquished, but the cold is too much for Minilla. Godzilla embraces his son as they go into hibernation until the cold ends.

Patriarch of the Monsters

Released in 1967, Son of Godzilla was the 8th Godzilla film, making it the halfway point in the original Showa continuity (1954-1975). In the previous films Godzilla had moved from atom bomb analogy and antagonist to a fair-weather ally of man and other monsters.

The next seven films have Godzilla changing into a full hero. Son of Godzilla is a central film, literally and figuratively in the monster’s evolution.

Fatherhood is a life changing event and for Godzilla it’s no different. In previous films Godzilla worked with other monsters or helped man out of self-interest. Here Godzilla is compelled by parental instincts.

The Japanese and International versions of the film have a prologue scene of Godzilla in the ocean, being drawn to Solgell Island. Godzilla, the unstoppable force of nature faces his greatest challenge, responsibility and obligation.

Fatherhood can be frustrating. The scenes of Godzilla and Minilla together are relatable. When Minilla has a tantrum Godzilla grabs his son by the tail and literally drags him away kicking and screaming. Godzilla has a firm parenting method to be sure.

Probably the most memorable moment between the two is when Godzilla is trying to teach Minilla to breathe fire. Tired of seeing Minilla only breathe smoke rings, Godzilla steps on the child-monster’s tail to get his son to breath a blast of atomic fire.

Fatherhood can also be tiring. Godzilla can’t take a nap without his son jumping on him. That, and his kid is always getting into jams. That’s an easy thing to do when you live on an island inhabited with giant monsters.

In the climactic battle with giant spider, Kumonga the parental drive to protect one’s children makes the fantastic imagery relatable. There is never any doubt that Minilla won’t be saved, but situation creates a rare tension for a giant monster movie. 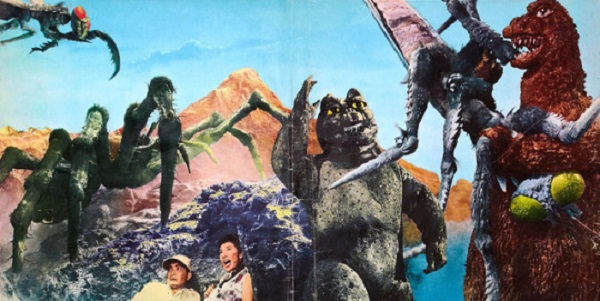 Like all long-running properties, the Godzilla series continues to reuse concepts, reiterate and reboot. The concept of a son for Godzilla has also been revisited.

While the original concept in 1967 was not a pure creative endeavor, when the idea to introduce Baby Godzilla into the Hesei Godzilla series (1984-1996) with 1993’s Godzilla VS MechaGodzilla, it seemed they were running out of ideas.

Minilla would be rebooted in 2004’s Godzilla Final Wars. The design does its best to give a little more Godzilla-like face, but still keep the “Pillsbury Dough-Boy” body of the original.

The value of the appearance is hard to rate since the whole movie is a mash of various concepts and scenes. For people who like All Monsters Attack those scenes are enjoyable, but ultimately Minilla is a plot point again.

It’s also worth pointing out that Minilla made an appearance in on Toho’s TV show, Go! Greenman – Ike! Greenman (1973-1974). It’s funny to not only see an evil version of Minilla, but see Minilla as a somewhat proficient scrapper as he battles the hero Greenman.

The 70s special effects TV shows had a major impact on the Godzilla series. Godzilla even appeared in a few episodes of a show usually referred to in English as Zone Fighter – Ryūsei Ningen Zōn (1973). This evolution was a financial necessity, but Son of Godzilla was pivotal in the transformation as the monster became more humanized and some may say kiddie-fied.

Son of Godzilla certainly has its detractors for moving the films series away from being serious. Subsequent films after 1975 have not strayed too far from tone set by the earlier films. It would be nice to see a future movie play with some of Godzilla’s rich history and embrace the fun of the father-son dynamic.

Many fans rate the Godzilla suit used in the movie as the worst. It’s a strange appearance, the face and eyes were made to synch with Minilla’s very human child look. It was also the largest suit made, to draw the contrast in size between father and son. It was so big the regular suit actor Haruo Nakajima couldn’t move in it and he was barely in the film.

Son of Godzilla may be one of those films that works depending on the age of the viewer. Young children can clearly identify with Minilla and of course monsters are exciting. For those may have become fathers since the last time they’ve seen it, give it a re-watch. The film was clearly made by a group of men who drew from the universal experiences of fatherhood. The film has its charm and it’s got an ending that will always make you want to hug your kid.