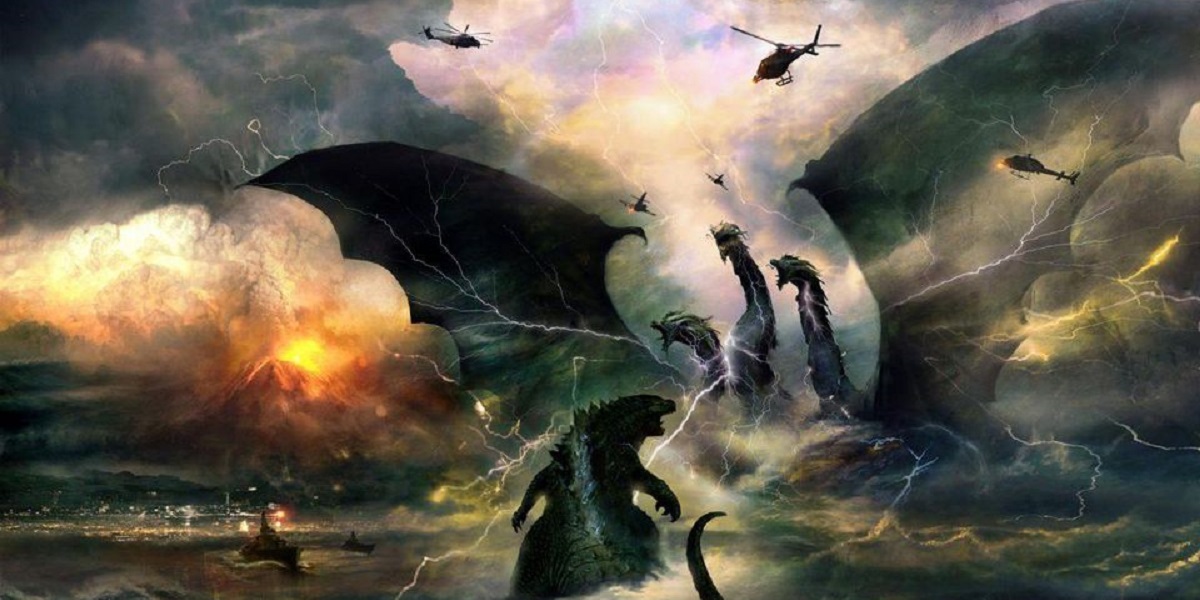 Godzilla King of the Monsters is exactly the kind of film fans have been hoping to get from a Hollywood adaptation. It’s amazing to see not only Godzilla, but other classic monsters from Toho’s pantheon on the big screen. The film respectfully honors the Godzilla movies from the 1960s with the spectacle and scale of a modern blockbuster.

At first glance it would appear the film is a remake of 1964’s Ghidorah, the Three-Headed Monster, but it actually shares much more with 1968’s Destroy All Monsters (commonly referred to as DAM). Instead of aliens breaking out monsters, it is done by Eco-terrorists.

The film’s MacGuffin, The Orca (making Jaws references an ongoing trend for the series) is a devise which provides the antagonists with a similar capability to the mind control of the Kilaak Aliens of DAM. The other new Titans are given almost no screen time, so really the main similarity to Ghidorah is the main monster cast.

And the monsters are truly the stars of the show. In the old films, it was surprising the amount of personality the suit actors were able to inject into their performances. Here the digital counterparts do an admirable job of bringing the main characters to life as well.

Rodan quickly changed to a comedic character in the original series, but here the flying monster looks and acts much more like in the 1956 original. Rodan is a bit sadistic and plays like a hired gun, switching allegiance out of self-interest. It is great to see him finally get brought back to glory.

Mothra is perhaps the most changed monster from the original iteration. She has always been more on the fantasy spectrum of the Toho series. Some of those elements are teased and she retains a basic “protector” role. She is presented as having a symbiotic relationship with Godzilla, a sort of opposite to the parasitic MUTOs of the 2014 film. While Mothra’s appearance is also a departure, she actually looks a lot like some of the concepts from the original 1961 film.

King Ghidorah is brilliantly realized. The monster was brought to life with a different actor doing motion capture for each head. Each head has a personality and at times they interact with each other. This brings a delightfully fresh take on the concept (well, unless they stole the idea from the Godzilland cartoon). The three-headed monster’s powers are largely the same as the original, except for a new regeneration ability. Also, the idea of him creating an electrical storm around him wherever he goes is very striking.

Growing up, a kid down the street who was also into the monster movies described all the human scenes in Godzilla movies as “business.”  If the movie had too much business, it wasn’t a good Godzilla movie.  The “business” in Godzilla King of the Monsters is perfectly serviceable and doesn’t drag the story down. The human angle is not so much bookends or through lines, it’s the bread for a monstrous sandwich.

There are a lot of characters in the film, so they are spread a little thin. It’s a shame that the returning characters from Godzilla (2014) don’t really get any further development. Everyone does a fine job and the human story connects to the monsters enough to push the story along.

Ken Watanabe’s Dr. Ishiro Serizawa is perhaps the one character that gets a standout moment. It’s a strange inversion of the sacrifice made by Akihiko Hirata’s Dr. Daisuke Serizawa from the original 1954 film. Initially, the “Reverse Serizawa” seems clever; save Godzilla instead of killing Godzilla. This ultimately feels like a gimmick though, since there really isn’t any reason why Watanabe’s Serizawa had to volunteer. It would make more sense for someone with some experience to do it, like the Ford Brody character from the 2014 film, rather than a Titan expert scientist.

There are some deeper issues about twisting the message from the original film too. The 1954 Serizawa killed himself to keep the secret of his Oxygen Destroyer, the film’s analogue for nuclear weapons. The meaning of the sacrifice changed considerably when Dr. Ishiro Serizawa actually uses a weapon of mass destruction to resuscitate Godzilla.

There are many nods and homages in the film. It crams in so many scenes or concepts from throughout the entire Godzilla series. The film really is a love letter to Godzilla movies.

There are more obvious references, like the Oxygen Destroyer or “Monster Zero” and then there are blink-and-you-miss-it ones like the twin fairies. Most surprising were callbacks to the Heisei films of the 90s. Ghidorah’s decapitation is straight from Godzilla vs. King Ghidorah (1991). Mothra’s sacrifice to revive Godzilla mimics the resurrection scene at the end of Godzilla vs. MechaGodzilla II (1993).

By far, the coolest is Burning Godzilla. Unfortunately, it’s something that was spoiled by the toys long before the movie released.

The thing that brought the biggest smile was the use of the original themes for Mothra and Godzilla. There are a few screen icons that have a theme that is synonymous with a character and the fact Bear McCreary honored that with the score is just fantastic.

The original music on the soundtrack is worth noting as well. Rodan and Ghidorah get all-new themes. The heavy percussion for Rodan is very different than the usual Akira Ifukube work and the chanting in King Ghidorah’s music really gives a sense of an ancient and god-like being.

While Godzilla King of the Monsters may be an imperfect film, it is a satisfying experience for the Godzilla fan. It’s a film which respects the legacy and provides a heartfelt and spectacular depiction of the monsters.

The only other real criticism is that much of the humor falls flat. So far, the Monsterverse has been one of the few cinematic universes to succeed beyond Marvel, but they really shouldn’t try to copy the Marvel tone when it comes to jokes.

Although, the Japanese will never do a Three Stooges line about King Ghidorah, so that gets a little credit.

Another exciting aspect of this film is that it is heading us towards Godzilla VS Kong. Toho tried a few times to remake their 1962 King Kong vs Godzilla, but they could never get the rights for Kong. Here, Legendary can provide a rematch that many thought would never happen. In some ways the concept seemed like a step back, but after the ending to Godzilla King of the Monsters, the Monsterverse looks like it could head into an all-out monster war.

It’s a wondrous time to be alive for a Godzilla fan.