The End Of An Era

Lucasfilm and the House Of Mouse have already been pretty clear that this is the end of an era.  The upcoming Star Wars: The Rise Of Skywalker, closes out the nine-film arc with a story that spans the prequels, original trilogy and now this sequel trilogy.

After this Star Wars will go in a different direction.  The universe will be the same, but the stories will be different and have a wider focus.  We know that the Game Of Thrones writers, David Benioff and DB Weiss, are working on a new trilogy.

We suspect the new trilogy from The Last Jedi writer and director Rian Johnson has been quietly shelved as Disney attempt to rebuild the franchise.  This is their focus after the 1-2 punch of The Last Jedi’s failure with the fans, serious financial underperformance vs. expectations and Solo flopping in the backlash.

The idiotic decision making and childish antagonism that characterized the early days of Lucasfilm at Disney appears to be closing out.  One by one the pests, annoyances and not very bright instigators are closed down, shipped out or sidelined.  The franchise is slowly being handed back to people who understand the material they are working with.

Do we now know what the Benioff and Weiss trilogy will focus on?  Screenrant thinks they do.  They are pointing to the new-Expanded Universe as an in-canon source.

Timothy Zahn wrote the trilogy of EU novels that seemingly started the entire post-Return Of The Jedi story, many years ago. 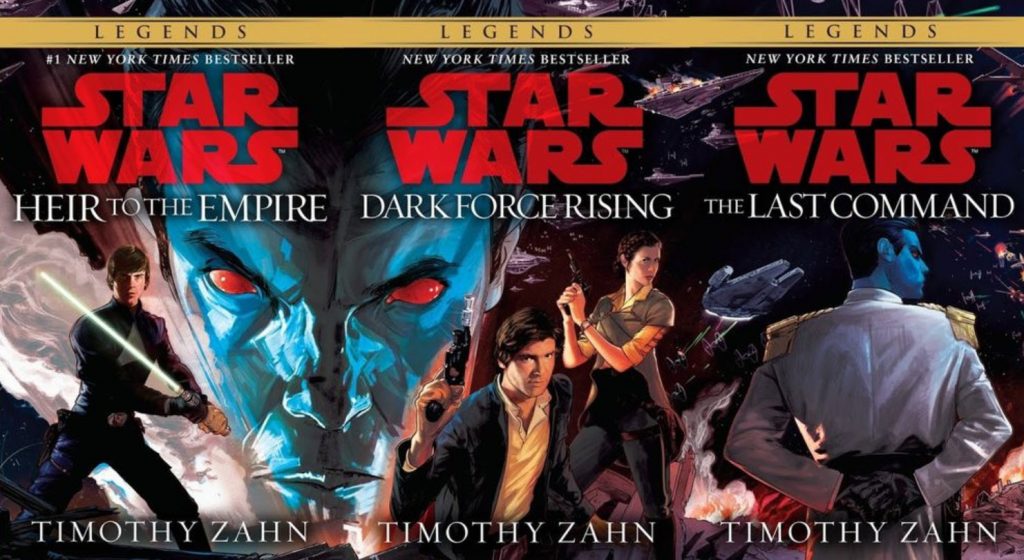 That EU was consigned to de-canonization (is that a word?  It should be!) in the Lucasfilm takeover by Disney and rebranded as Star Wars Legends to give the new universe room to breathe.

However, the much-loved character of Thrawn survived.  He was confirmed in the new EU through appearances in Rebels and new books.

The latest, also from Timothy Zahn, is called  Thrawn: Alliances.

It introduced an alien race known as the Grysk.  They are described as a humanoid race with tapered foreheads who prefer to operate covertly. That book revealed that the Grysk had launched at least two invasion attempts on the galaxy as a whole.

First, they attempted to undermine the Jedi during the Clone Wars.  After that failed they then established themselves on the backwater world of Batuu during Imperial times.

Batuu, which is now firmly at the center of Star Wars canon as the setting for the entire Star Wars: Galaxy’s Edge theme park experience, is home to Black Spire Outpost, essentially the Spaceport at The End of The Galaxy.

Beyond this is the Unknown Regions.  That is where the remainder of the Imperial forces fled after their defeat in the Battle of Jakku in the events prior to The Force Awakens.

It is a remote and dangerous region of space, littered with black holes, rogue magnetospheres, solar storms, gravity wells and unknown, mysterious lifeforms.

It is there the Imperials regrouped to return as The First Order.  Are the threads coming together? Is this why Batuu was chosen for Galaxy’s Edge?  Was the First Order assisted, even unknowingly, by these Grysk?  Will they be pissed off if their proxy tools are defeated again in Episode IX?  Will that launch the events to be seen in Episode X thru XII?

Remember, the Outer Rim will feature heavily in the upcoming Disney+ streaming show The Mandalorian.

Also, the Grysk appear to be a canon replacement for the Yuuzhan Vong, who invaded the galaxy in the Legends series Star Wars: New Jedi Order.

Rampant Star Wars speculation!  The tiniest sliver of information spun into a story thread then somehow weaved into fact.  Reminds me of the days of noted bullshit merchants, fantasists and charlatans like SuperShadow and Harry Knowles!  Good times!