They said it couldn’t happen here.

Even after a hostile and nasty activist was crowned as the new leader of the Marvel Cinematic Universe, fans said “No way Feige goes any further. He’s just playing the media like a fiddle. He won’t pull a LucasFilm.”

Actually, I think I said that. Verbatim. I was wrong.

According to Chris Hemsworth, Thor’s pathetic turn in Endgame continues:

“He’s heading to the 7-11 for a little Netflix subscription and at this point he might be on the couch, who knows…”

Another one of the original Avengers disappeared from our screens, this time not through sacrifice but through sloth. In order to make room for…

Saturday at Comic-Con, director Taika Waititi announced that Natalie Portman, who formerly play Thor love interest and astrophysicist Jane, is set to portray the God Of Thunder in a movie called Thor: Love And Thunder.

This is not a drill, this is a quote about the Thor 4 story:

“That story line is incredible is full emotion, love and thunder and introduces for the first time female Thor…”

Well, since mortal scientists are interchangeable with 8000-year-old warrior-gods, you can’t blame Asgard for getting a replacement Thor at 77 cents on the dollar. The hammer has all the power in it, right? Like a Bottega! Right, ladies?

But wait, the bravery is not yet over…

On Saturday, Marvel Studios confirmed also confirmed that after years of what we thought was simply cynical marketing, there will be a homosexual superhero in the MCU.

Kevin Feige is quoted by the incredibly ebullient io9 as saying:

“The answer is yes. How that impacts the story remains to be seen with that level of representation you’ll see across our films, not in just Thor 4.”

Representation. Let me ask you this, Kevin: if representation is so important to these movies where are the Hispanic superheroes? They represent 18% of the population in the United States and are at least 550 million strong worldwide. Weird they are marginalized.

Feige went on to flesh out Valkyrie’s storyline in Thor: Love And Thunder, explaining that Valkyrie, now King of NuAsgard, will be seeking out her queen.

“As new king, she needs to find her queen. That will be her first order of business. She has some ideas. Keep you posted…”

Can hardly wait. I wonder if this Queen will be traditionally beautiful or one of those smirking women that io9 always aggressively tell us are “stunning and gorgeous”?

In either case, it will be an assault on the audience. Mega-corporations are letting millionaires troll the paying customers while fronting billion-dollar properties.

Earlier this year, Ms. Thompson ironically confirmed her commitment to the material:

“In the canon, [Valkyrie] is bisexual. You see her with women and men, so that was my intention in playing her.”

Do you know what else Valkyrie is in canon? White. At least until the MCU came along.

Isn’t it hilarious to hear these Type-A people talking about things like “canon”, things we know they mock and sneer at in private?

“Obviously, at the forefront of most of these stories is not typically their romantic life. They have big stakes, like saving the world, so that tends to sort of trump.”

Haha! Then why include it? We know the answer.

That Marvel money is flowing in hand-over-fist and now it’s time for the first of many, many lessons, made all the more palatable to a captive audience by a decade of capeshit.

Or maybe it’s only as simple as money and Marvel is trying to inoculate their films against audience criticism while engendering praise and celebration from the activist media. Even though Ghostbusters (2016) certainly had a lot of anti-success with that strategy, we’ve already seen the director of Terminator: Dark Fate colluding with the entertainment press in an attempt to craft the narrative that only hateful misogynists are against his tired, recycled movie.

The message is pretty clear: you have to see this movie to thwart these nefarious, hidden women-haters or “Hey, bro, maybe you hate women too.”

In the case of Thor 4, Disney gets not just a twofer but a threefer, not only do you hate women, you also hate gay people and people with darker skin than you.

I wonder how long the audiences will agree to sit in Classroom Disney?

I’m betting forever. Who wants to be socially ostracized in corporate culture or cul-de-sac society over a movie? It’s only two hours. Enjoy it… or else, bigot.

They tried to warn us. 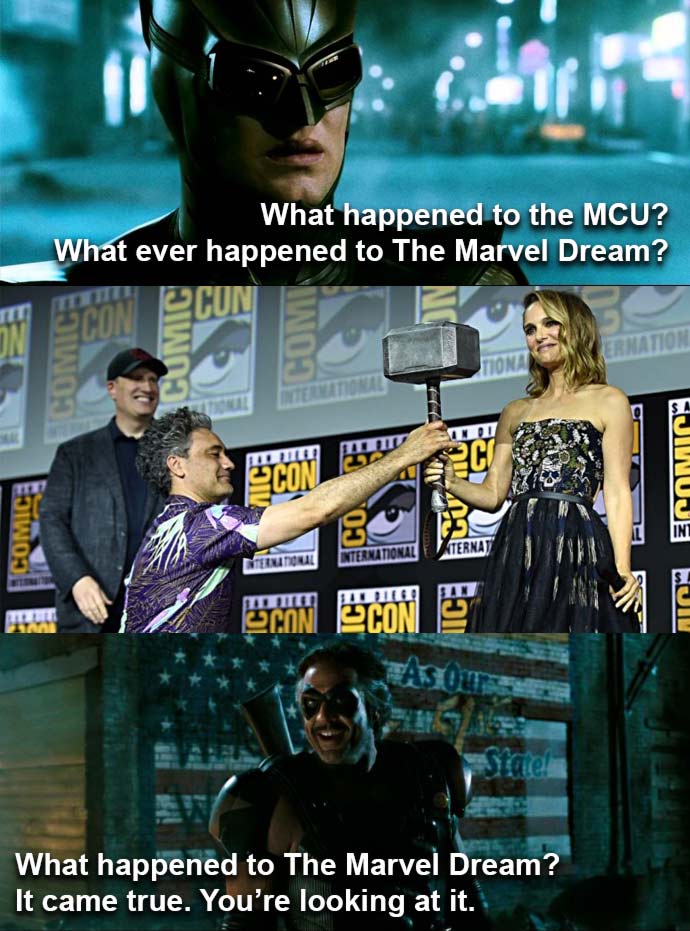