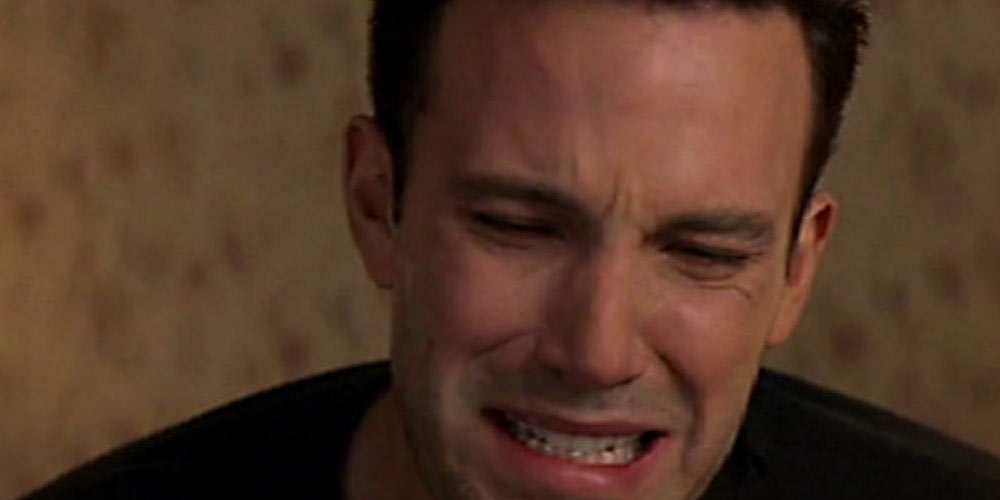 A Forty-Seven Year Old Man Shouldn’t Be Like This

Let me quote myself from a 2019 article about Affleck making King Leopold’s Ghost:

If there were another actor in the Western world right now whose “resting face” could be any more miserable-looking than Ben Affleck’s, I don’t know who it could be.

Ever since his life fell apart with the divorce from Jennifer Garner, this guy has been on a rip of performing in movies and basically looking for all the world like he wants to commit suicide every time he’s asked a question by the people who fawn and shill over him.

And now this, about his former marriage, from an NYT article as part of his press junket about his new movie, The Way Back. From the trades:

“I drank relatively normally for a long time. What happened was that I started drinking more and more when my marriage was falling apart. This was 2015, 2016. My drinking, of course, created more marital problems.”

As they usually will. Women don’t particularly care for men who are drunks.

Unless they’re drunks as well.

And Jennifer Garner looks like she’s pretty buttoned up all the time.

Getting By With A Little Help From My Friends

Ben Affleck was probably the wrong person to take on the mantle of Batman, regardless of Warner Brothers fumbling their “shared universe” concept, or Zach Snyder not being able to channel the MCU, or even the fact that Warner’s corporate greed and professional jealousy of Disney blinded them to the shortsightedness of several creative decisions.

Affleck could have overcome all of that. After all, he’s stronger than the Hollywood system into which he was injected after his and Damon’s “home run” in Good Will Hunting.

At the end of the day, it was the memes and the fans that Affleck couldn’t overcome.

Coming off the reaction to Batman v Superman, the “Sad Batman” meme from that film’s press junket, and the troubled production of Justice League, a friend of Affleck’s cautioned against wading back into the DC waters with The Batman:

“I showed somebody The Batman script,” Affleck recalled. “They said, ‘I think the script is good. I also think you’ll drink yourself to death if you go through what you just went through again.”

The fans. It’s always the fans.

Hollywood actors are increasingly showing how thin-skinned and weak they actually are lately, from Joaquin Phoenix’s rambling Oscar acceptance speech all the way to Affleck doing his best Bojack Horseman impression, actors are being exposed by the fans and the Internet.

Affleck is just another attention-seeking actor who couldn’t handle the attention he got, was miscast in a role he didn’t really care about in the beginning, and who should have been self-aware enough to “tap out” and do something that would have been more cathartic.

For instance, something like The Way Back which features him as an alcoholic basketball coach.

Affleck says in the NY Times profile he found the experience of making The Way Back cathartic, and it sounds like it was likely a better use of his time than trying to appease a swath of comic book audiences with a new Batman movie.