Last month, we reported that John Wick director Chad Stahelski was being called in to reshoot Birds Of Prey action scenes or shoot new action scenes.

We speculated it might be a new l level in meta-marketing where studios openly announce bringing in a director from a popular movie in an attempt to generate buzz and credibility with a specific demo.

That was giving Warner Bros. way too much credit.

According to a number of tweets from Beyond The Trailer’s Grace Randolph, Stahelski was brought in to reshoot the entire movie Rogue One style.

Some #BirdsOfPrey stans are ca-razy. I just heard again TODAY from another source that it's a Rogue One situation and the movie is getting a huge overhaul.

Thank goodness we were able to warn WB of the travesty of the d*ck pics… #CrisisAverted Long live the #DCEU! ✊✊✊✊✊?️‍? https://t.co/dEHPRT7ygE

Many genre entertainment fans will recall that Rogue One was taken away from Gareth Edwards and writer Tony Gilroy was brought in to finish the picture, with “finish” meaning completely recutting the film and shooting a ton of new scenes.

This was widely rumored at the time, with eagle-eyed observers noticing many trailer scenes missing from the theatrical cut, but was only confirmed two years later.

That Vader scene you squeal over? It was added for just that purpose, sucka.

Now, these Birds Of Prey reshoots are happening and they are not just additional action scenes as some Doubting Thomases tried to argue.

“Birds of Prey ( and the Fantabulous Emancipation of One Harley Quinn )” reshoots have begun last weekend at Hawthorne Mall. ?pic.twitter.com/OwJwLF8Gwp

What Is This “Dick Pics” Nonsense?

Look, Grace Randolph obviously has some bats in the belfry.

But she’s built a solid reputation over the past couple years; a reputation which she is not going to throw away over some Birds Of Prey rumors.

Based on Gracie’s tweets, the original plot of the movie involved Ewan Mcgregor’s Black Mask character hunting down the teenage Cassandra Cain character in order to retrieve his dick pics that are inside of a diamond she’d swallowed.

You read that correctly.

She also makes reference to the openly gay Black Mask character being cut back to just a flamboyantly campy villain.

It's the whole main plot, getting the diamond that Cassandra Cain swallows – even if the "twist" of that diamond containing d*ck pics isn't revealed until the end. Then there's McGregor doing a camp Black Mask instead of a gay villain that's cool and can be taken seriously.

I think a kid swallowing a diamond is pretty lame – plus I heard of some other stuff in the movie which is a direct ripoff of Deadpool.

You might ask yourself how a teenager girl gets a grown man’s dick pics and why he would be so obsessed with getting them back.

Or maybe you already know the answer to that… Birds Of Prey is currently slated for release in theaters on February 7, 2020. 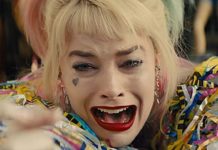 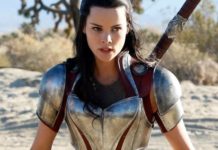