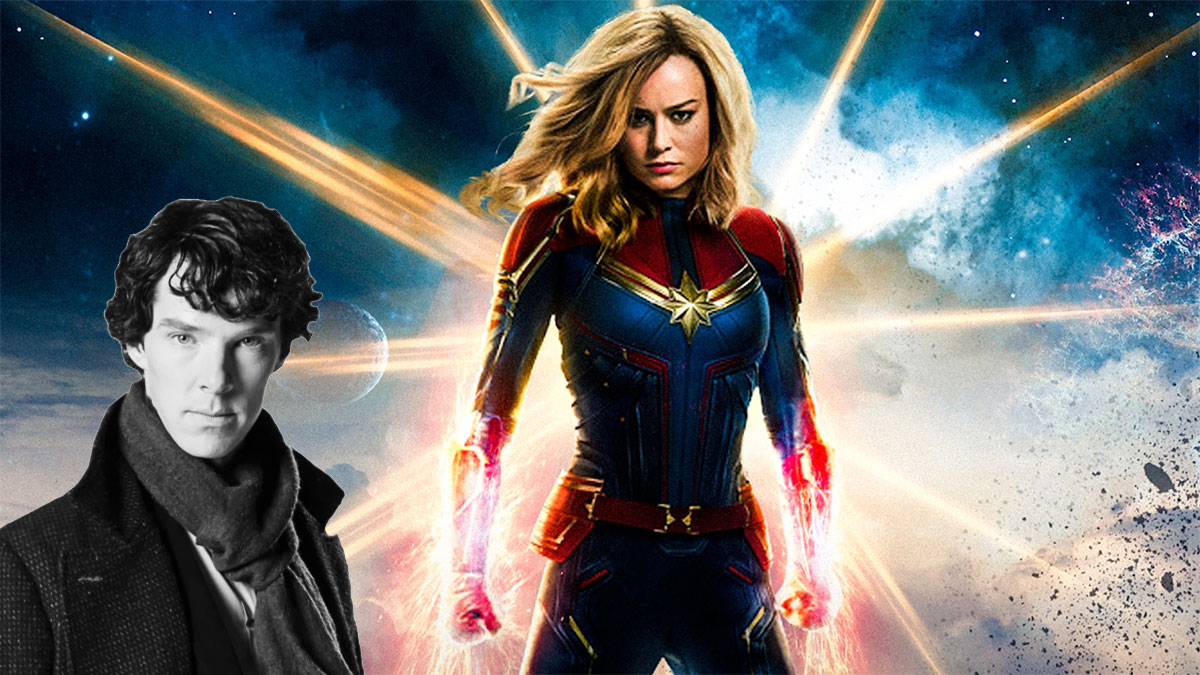 In an attempt to support the Disney movie Captain Marvel, fanboy sites are spreading deliberate misinformation across the internet and socials about people “review bombing” the movie before it is even released. 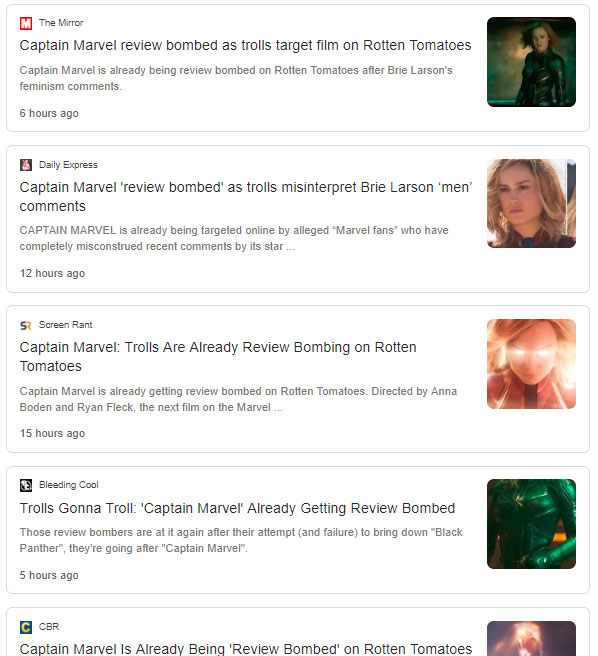 This fake news is everywhere but we’ll just use one article as an example.

Captain Marvel may be one of 2019’s most-anticipated movies, coming in second only behind Avengers: Endgame according to IMDb, but that isn’t stopping some people on the Internet from trashing the upcoming Marvel Cinematic Universe film on Rotten Tomatoes just a few weeks before it debuts in theaters.

A quick look at the audience reviews page for Captain Marvel over on Rotten Tomatoes has been flooded with negative, angry “reviews” of the film…

Except This Is A Complete Lie

There are no audience reviews on Rotten Tomatoes for Captain Marvel, so it’s impossible for it to users to “review bombed” the movie.

A “quick look” at the website reveals that users are only allowed to express interest in the form of either “Want To See It” and “Not Interested”. 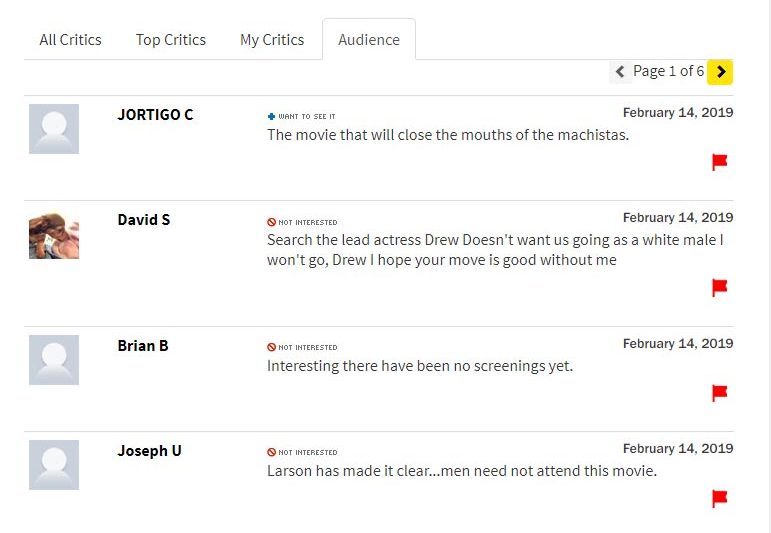 Literally, no users are claiming to have seen the movie or are giving an opinion about the quality of the movie.

These “Want To See It” / “Not Interested” opinions disappear once the movie goes into wide release. These are not reviews in any way.

Why Would She Mislead People?

Falsely positioning these expressions of interest as “fake reviews” creates the impression of blind hypocrisy in the mind of social media users who might only read the headline and not investigate the facts on their own.

This is always a huge defense against criticism of movies, TV, music, books:

“How can you criticize it if you haven’t even seen/heard/read it, bigot?”

Because hypocrisy is the worse thing a person can do. Unless you do it.

But She’s Not Finished

First, I’ve looked at the six pages of comments and there are none that express any anger about the hero of the movie being female. There are a couple of complaints about switching from the male Captain Marvel to Carol Danvers but none that are whining about the movie on the basis of sex. Zero.

Let’s remember that male audiences have always supported female heroes in movies like Wonder Woman, Alien and Resident Evil. No one complained about a female hero in those movies.

So it must be something else, right?

And this theme repeats throughout the comments. But only to a point…

She’s Not Good With Math

Secondly, a quick look at the six pages shows that only the first few pages have “a disproportionate number of comments on the review page cite issues with a perception that Captain Marvel is sexist” and it’s not the entire collection of comments.

If one takes another quick look at the dates on the comments it’s obvious that the prevalence of negative, “Not Interested” opinions begin right around the time that Brie Larson began making her politically-charged comments. What a fucking coincidence. 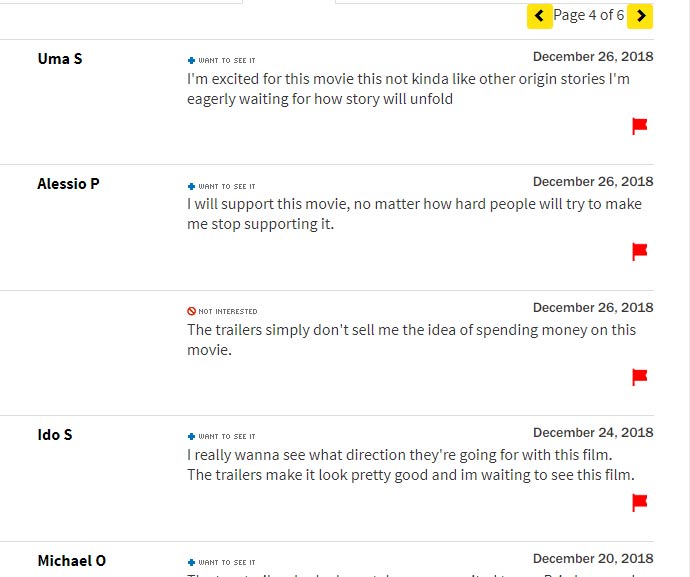 She Can’t Handle Others’ Opinions

Ms. Drum claims that only trolls use the term SJW or “social justice warrior.”

SJW is a legitimate description of a subculture as manifested through philosophy and behavior. Just like neo-con, hippie or yuppie.

Or “troll”. Right, Ms. Drum? I think that counts as one hypocrisy.

Brie Larson is continually making left-leaning “activist” political and cultural statements, engaging in overt identity politics and is fluent in the terminology of victimhood.

She is the definition of what people call an “SJW”.

So What The Hell Is Going On?

Essentially, Nicole Drum is trying to create the idea that people — the bad men — are so enraged at Captain Marvel being a woman that they would write a bad review about a movie before they even see it.

She knows that some people will just see her headline on social media and react accordingly, letting loose at anyone who takes umbrage with Brie Larson’s opinions, lectures and attitude with a tirade of pre-programmed, cliched insults:

Unlike the term “social justice warrior”, which came up from the grassroots of 4Chan, these words are astroturf pushed by celebrities and blue-checks through the corporate media down to those who watch a lot of TV, spend time on Twitter or read shill web sites.

This shame marketing is meant to silence all criticism and, worse, this is a forced meme. 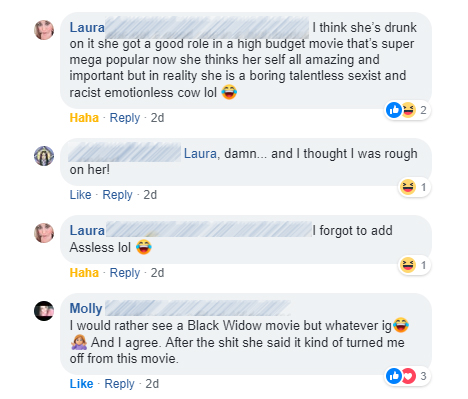 So, we have only two choices:

In either case, responsible, level-headed movie fans should avoid this shill site.

Just prior to press time, I received news about yet more Captain Marvel boosterism from this compromised platform:

In a new report from The Hollywood Reporter discussing the lackluster box office revenue thus far in winter 2019, one major bright spot was noted: the opening of the next Marvel Cinematic Universe film, Captain Marvel. According to the report, the film is now tracking for a domestic opening of $120 million or more – a number that marks a $20 million increase in what had previously been predicted.

The original projections were in the $160 million range. After Brie’s made her weird comments, that dropped between $80 million to $100 million.

There is no mention of the initial drop in projections in this article. It’s just going up!

It’s only good news for Captain Marvel and Disney from ComicBook.com! Yay!