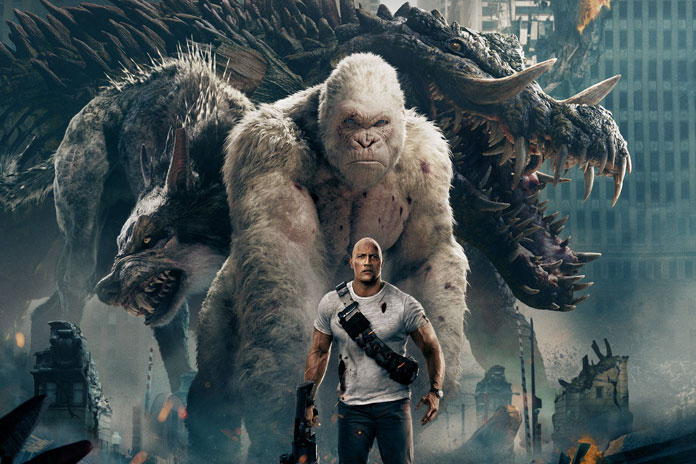 Marvel continues to prove a cinematic juggernaut that cannot be stopped. And just as nobody wants to stand in front of a juggernaut, nobody wants their movie staring headlong at an oncoming Avengers release — not even when that movie is Rampage.

Warner Bros./New Line are shifting their Dwayne Johnson-led giant-monster opus out of the way.

Marvel shifted Avengers: Infinity War forward by two weeks, leading Warner Bros. to do the same with Rampage to get it the hell out of the way. It will now debut on April 13th, rather than April 20th. This gives it two clear weeks before Avengers rolls out on April 27th.

About Rampage, which is based on the 1986 Midway arcade game of the same title, Warner’s blurb says:

“Primatologist Davis Okoye (Dwayne Johnson), a man who keeps people at a distance, shares an unshakable and unbreakable bond with George, the extraordinarily intelligent, albino gorilla who has been in his care most of its life. But a mysterious genetic experiment mutates this once gentle ape into a raging creature of enormous size. To make matters worse, it’s soon discovered that a wolf (Ralph) and crocodile (Lizzie) have gone under similar changes.

As these newly created apex predators battle each other for supremacy and tear across North America, destroying everything in their path, Okoye teams with a discredited genetic engineer (Naomie Harris) to secure an antidote and fight his way through the ever-changing battlefield, not only to halt a global catastrophe, but also to save the fearsome beast that was once his friend.”

Johnson is on a hot streak. Jumanji: Welcome to the Jungle outperformed expectations and even gave the lukewarm Star Wars: The Last Jedi a bloody nose at the box office. Are two weeks long enough for him to keep that streak up against the might of Marvel?