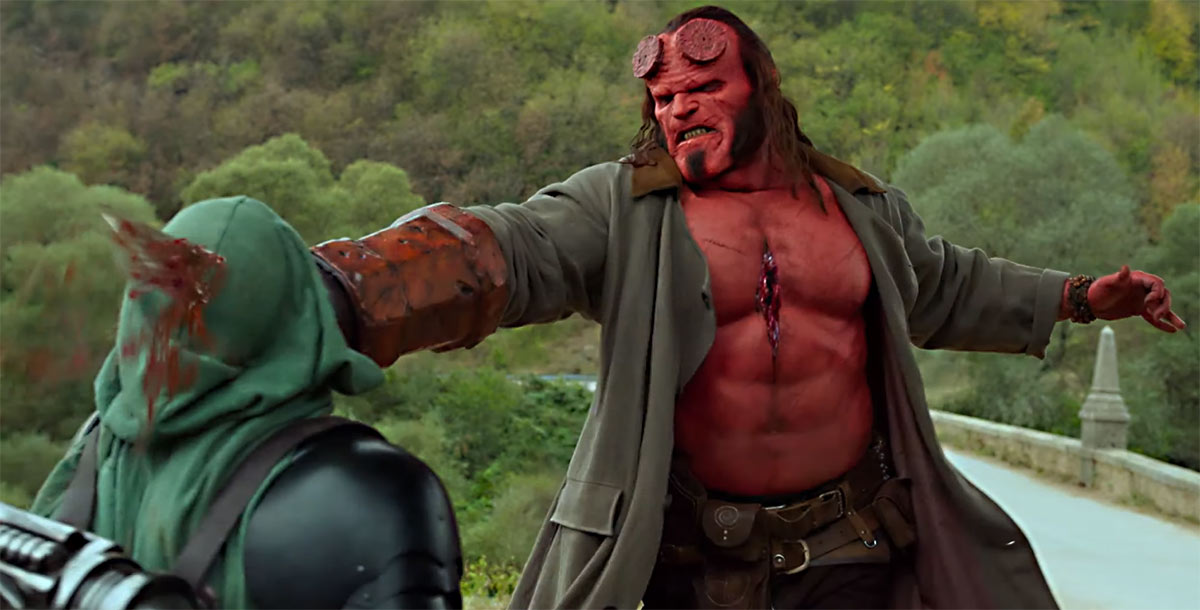 Media screenings were held back and review embargoes were in place for the Hellboy reboot. It’s now becoming clear why.  It’s getting an absolute beasting from reviewers.

Tell Me The Bad News, Doc?

58 reviews are in as of my breakfast time, and it’s sitting at a dismal 12% on Rotten Tomatoes.  That is perilously close to the elite of awfulness like Highlander II, Staying Alive and Jaws: The Revenge.

Reviews call it loud, empty, incoherent and amateurish with the stars all appearing to be in a different movie to each other.

The Wrap has the inside line on this.  Issues started with SIXTEEN different producers which included star David Harbour and director Neil Marshall, who apparently could not agree on anything.

Then producers Lawrence Gordon and Lloyd Levin fired Marshall’s favourite cinematographer Sam McCurdy. This was apparently a decision driven by Gordon and Levin to send a message to Marshall that despite being the film’s director, Marshall was not in charge.  They brought in Lorenzo Senatore as their own cinematographer.

The leaks then go on to allege that:

After Marshall handed in his cut of the film the producers reportedly took over as they never promised him final cut. Gordon and Levin worked on the previous Hellboy films and are overseeing HBO’s Watchmen series, so they can probably ruin that as well.

Marshall, Harbour, McShane, Gordon and a Lionsgate spokesman declined to comment for the story.  However Levin’s lawyer Martin Singer has said the leaks are a bit on his client and it is “shaping up as a puff-piece for Mr. Marshall while tarnishing Hellboy and my client.”

I look forward to receiving his Cease & Desist notice as I am running low on toilet paper.

The previous Hellboy films opened at $23 million and $35 million domestically, with the new one projected to earn $17-20 million this weekend, before dropping like a stone.

Meanwhile, we are receiving unconfirmed reports of Guillermo Del Toro laughing his tits off into some vastly overpriced tequila.

Producers, eh?  Has their opinion that they know better than anyone ever had a positive outcome for a movie?  Tell us what you think below.