John McClane Sr., the proud son of Plainfield, New Jersey, who overcame the death of both parents in childhood to become one of the world’s greatest counter-terrorist operator and a hero to billions, died on Saturday from the side effects of radiation exposure.

Doctors reported McClane has been suffering from “a bad fucking headache all day long”.

McClane, acting on one of his famous hunches, had been investigating possible Russian links to a series of polonium poisonings in Washington, DC and New York City. It appears his hunch was correct.

In a prepared statement, the decorated NYPD detective said:

Flags across the nation and the world flew at half-staff as the planet expressed shock and sadness at the passing of McClane, who was personally responsible for killing at least 73 terrorists over the last 30 years. 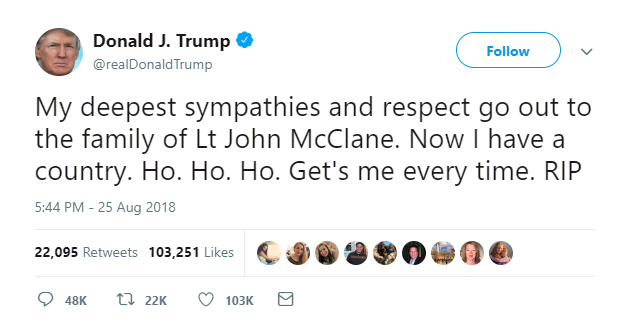 The only child of an Irish-American cop and a house cleaner, John lost his father at the age of 10 and then lived through the death of his mother shortly after his senior year at Plainfield High.

In 1977, at the age of 22, John graduated from the New York City Police Academy and became foot patrolman in 25th Precinct located in the vibrant and diverse Lower Harlem, where his unique charm and dogged determination quickly transformed the neighborhood.

John began climbing the ranks of the NYPD by first passing the Sergeants’ Exam in 1979 and then being made Detective in 1981 after solving several high-profile “Rip and Run” robberies of prominent Harlem drug traffickers including the notorious Charlie Rocket.

By 1984, McClane reached the rank of lieutenant but a tumultuous marriage derailed this great man’s career when, in 1987, his wife Holly put herself first and moved to LA with the kids.

Then, on Christmas Eve 1988, Lt. McClane, in Los Angeles to see his children, single-handedly thwarted one of the most daring and deadly attacks inside the United States to that date.

A gang of twelve foreign terrorists led by Hans Gruber broke into the Nakatomi building, murdered the security guards and took over 100 employees hostage. The gang’s intentions were to steal the $640 million dollars in negotiable bearer bonds locked in the building’s vault.

McClane was visiting Nakatomi Plaza to try to reconcile with his selfish wife, who had given up on her family to be secretary for the Nakatomi Corporation. Within a period of two hours, McClane, armed only with his service weapon and a stolen machine gun, was able to dispatch all of the terrorists, save his wife and trick Hans into shooting him.

Besides the terrorists and security personnel, a smug cokehead named Ellis was killed.

A year after his heroics in LA, terrorists were planning to free a drug baron being extradited to the US for trial by holding Washington Dulles International Airport to ransom until they all safely escape by plane. If they’d known that McClane’s wife was on a flight home to that very airport, they would surely have picked another day.

McClane not only fought the terrorists on the wing of a 747 but also had to save himself by ejecting from an exploding plane. He even stood on a snow-covered runway waving around flaming poles like a maniac to warn off an airliner attempting to land using incorrect coordinates transmitted by the terrorists.

Despite John’s best efforts, the airliner crashed and 237 people died.

McClane, enraged at the loss of innocent life, then began to kill all the terrorists in what can only be described as some pretty cool and inventive ways.

During an airport terminal shootout, McClane toppled over some scaffolding onto a terrorist, completely crushing the life out of the poor bastard. He also took an icicle and planted it in the eye of one the terrorists for a top-tier takedown. To cap it all off, he completely wiped out the terrorist cell by using his cigarette lighter to ignite a trail of fuel which caused their jet to explode.

As all the other affected passengers were rescued by the routinely late and incompetent authorities, and McClane was finally able to be with his wife. She was still mad.

Years later, still separated from his ungrateful wife and still with the NYPD, McClane found himself suspended from the force for an off-duty incident involving an ex-quarterback with a gambling problem.

John enjoyed his suspension, spending most of the time in an alcoholic stupor until a mad bomber going by the name Simon demanded John’s participation in a number of deadly “games” throughout the day.

McClane was given a stark choice: play the “game” or Simon would set off another bomb, possibly in an elementary school.

For a hero, there was only one answer.

Teaming up with a Harlem store owner with the unlikely and meaningless name Zeus Carver, McClane attempted to stop Simon, who turned out to be Simon Gruber, the brother of Hans Gruber, the terrorist who John dropped off the roof of the Nakatomi building.

Although Simon claimed to want to avenge his brother’s death, McClane realizes that he had used the “game” as a ruse in order to rob the Federal Reserve Bank in Lower Manhattan of $140 billion in gold bullion using invisible dump trucks.

After Holly (McClane’s wife) discovered the name of the Canadian town where Simon was hiding at the bottle of a bottle of aspirin, McClane led a group of Mounted Police in a raid that recovered the stolen gold and captured Simon’s terrorist army.

After daring aerial combat involving helicopters, McClane fired one of his two remaining bullets, miraculously stuck a tension wire which then struck Simon’s helicopter causing it to crash, killing both the terrorist and the “Villain In A Tanktop” era.

If all that sounds overly complicated you clearly forget the 1990s, when men got confused about what beer was.

Two decades after McClane’s heroics at Nakatomi Plaza a boring terrorist hacked the entire internet in order to do something bad. It involved a lot of typing and looking at screens.

This time, Lt. McClane teamed up with a snarky computer spokesman to save the entire country, possibly the world, but no one seemed to care. It was all getting to be just a little too easy for America’s Greatest Terrorist Killer.

McClane traveled to Moscow to bring his imprisoned (CIA operative) son Jack back to the States.

As soon as McClane stepped off the plane, every single car in the nation of Russia was totaled by McClane as he tried to rescue his son. In the ensuing two hours of ultra-violence the population of Russia was given a choice: either be brutally murdered or pretend to not notice anything unusual and go about your life which everything explodes around you.

Thankfully, since Russia is a police state, everything was captured by 4K surveillance cameras.

McClane foiled the swiping of polonium from Chernobyl before hanging from the bumper of a cargo truck which was hanging out of a flying helicopter that was trying to shoot his son.

McClane threw the Russian mastermind from the top of a building into the rotors of his co-conspirator’s helicopter, before finally returning to the US with his rescued son.

John McClane will forever be remembered as a dedicated husband and father, a courageous warrior, a hater of mimes and a damn good cop who was always on your side, assholes!

He is survived by his exhausting wife, Holly Gennero, his incredibly competent daughter, Lucy McClane, and his potato-head son, John “Jack” McClane Jr.

His body will lie in state at Nakatomi Plaza for the next two weeks where a terrorist attack is bound to be foiled by Lucy.

Godspeed Detective, keep making fists with those toes and say “Hi” to Slatan for us. 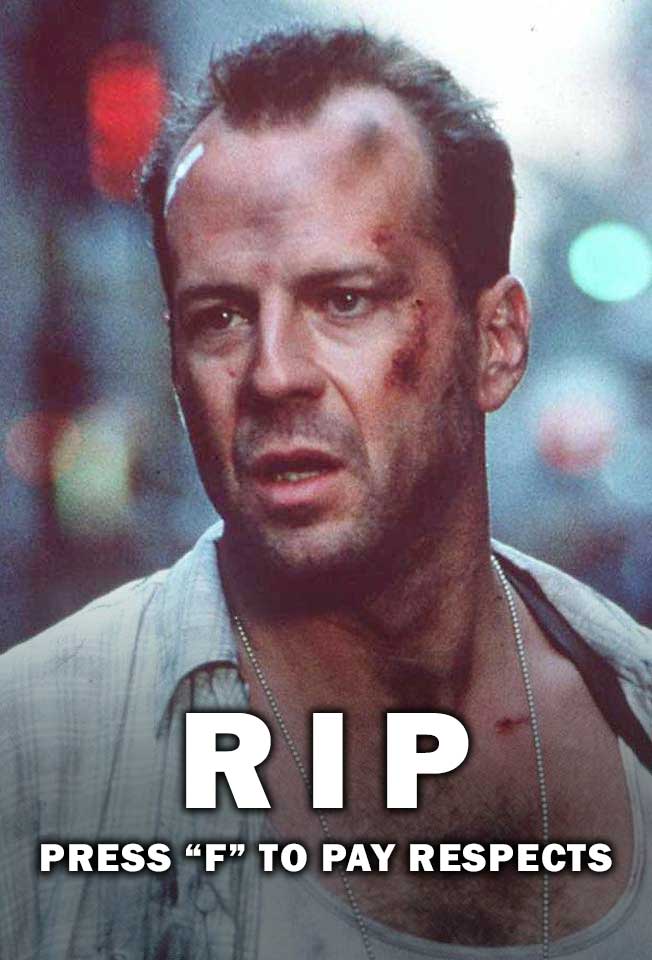