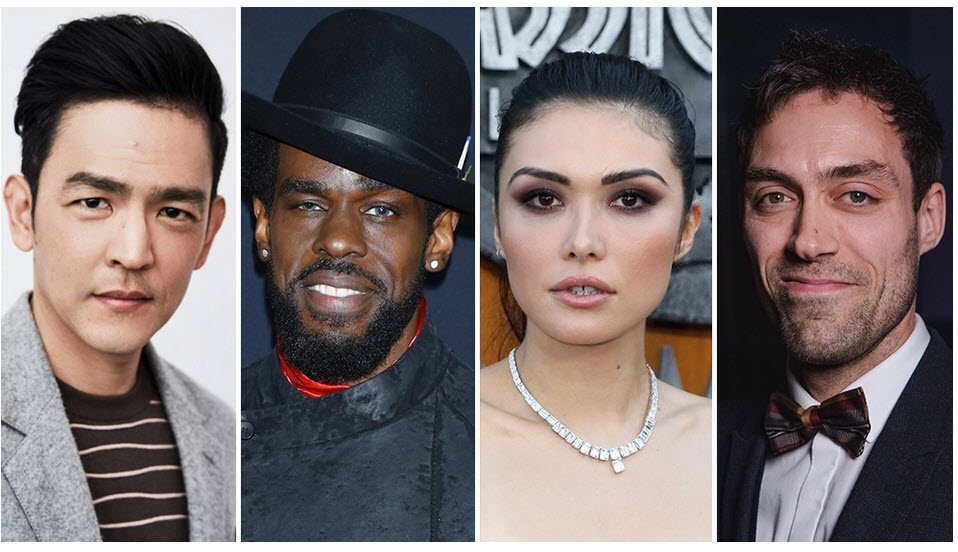 Variety reported this week that the first four actors have been announced to be in the live action Cowboy Bebop series. John Cho, Mustafa Shakir, Daniella Pineda, and Alex Hassell have all been cast in lead roles in the series.

For those unfamiliar with the original anime here is a quick synopsis from IMDb:

“The futuristic misadventures and tragedies of an easygoing bounty hunter and his partners.”

A more detailed report from “Bebopedia”:

Cowboy Bebop (カウボーイビバップ Kaubōi Bibappu) is a Japanese animated television series produced by Sunrise and created by Shinichiro Watanabe. Set in 2071 and centered on the adventures of a gang of bounty hunters in space, the series delves into the unresolved issues of the protagonists’ past, exploring concepts such as existentialism, boredom, loneliness, and the influence of the past.

The show’s title is a reference to both the Cowboy lifestyle of the American Wild West, and Bebop, an American jazz movement from the early to mid 20th century. As such, many elements of the show are influenced by the Old West, such as the bounty system of allowing civilians to make a living off capturing criminals, and the show’s music has strong jazz influences.

I never watched this show but was aware of it and how it was touted as an inspiration for Firefly.

The Casting Director for this show is Debra Zane, some of her previous works include Indiana Jones And The Kingdom Of The Crystal Skull, X-Men Origins: Wolverine, Twilight: Breaking Dawn Part 1 & 2, The Hunger Games series, Ocean’s Eight, the upcoming Charlie’s Angels, and live action Mulan. I see a pattern here.

Let’s do a breakdown on the four announced castmembers: 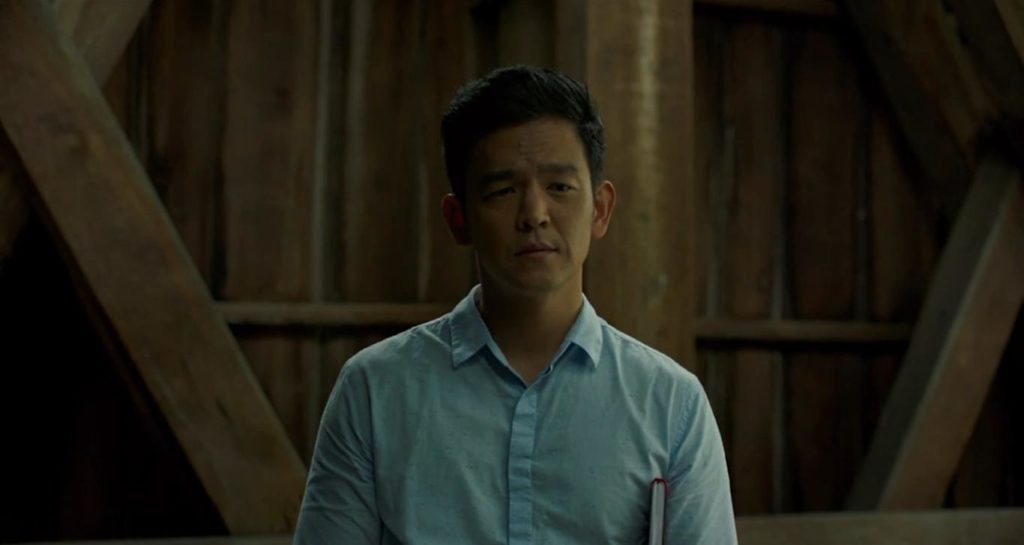 One of the blandest actors I have ever seen, John (JJ Trek) Cho has been cast as Spike Spiegel. I can’t see how John will pull this off being such a dull actor. 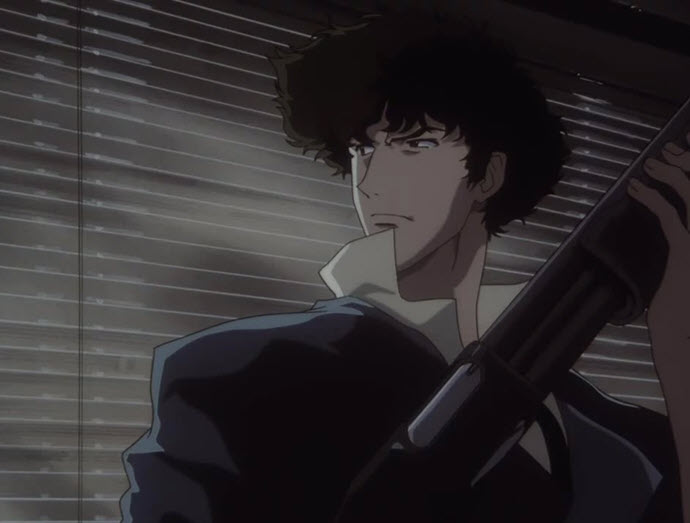 “Spike was born on June 26, 2044 on Mars. Not much is known about the 27-year-old’s family or childhood apart from his grandmother dying before he was born. Some speculate he was an orphan and his parents died when he was young. His racial background has been speculated online to be anything from Jewish, American, Italian, Chinese, or Japanese. It has also been speculated he could be Latino, a light-skinned african or the last Mohican by select online communities.“ 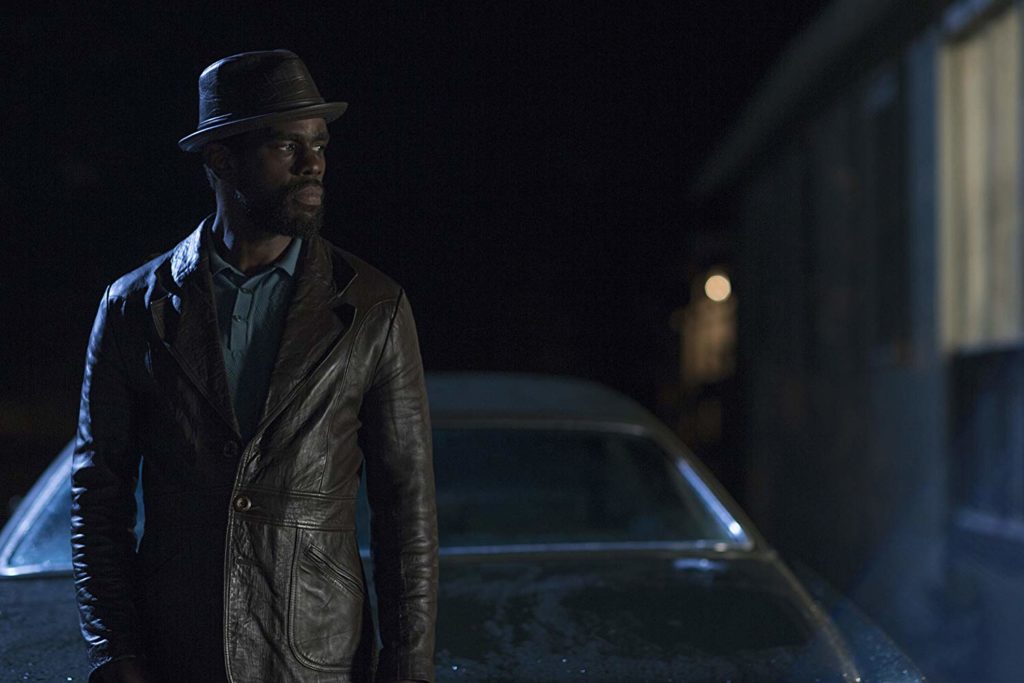 Mustafa (Luke Cage) has been cast as Jet Black. Despite using a really bad Jamaican accent/dialect in season two’s Luke Cage, Mustafa’s Bushmaster had a nice presence and was a much better foe than the block of cheese that played Diamondback. 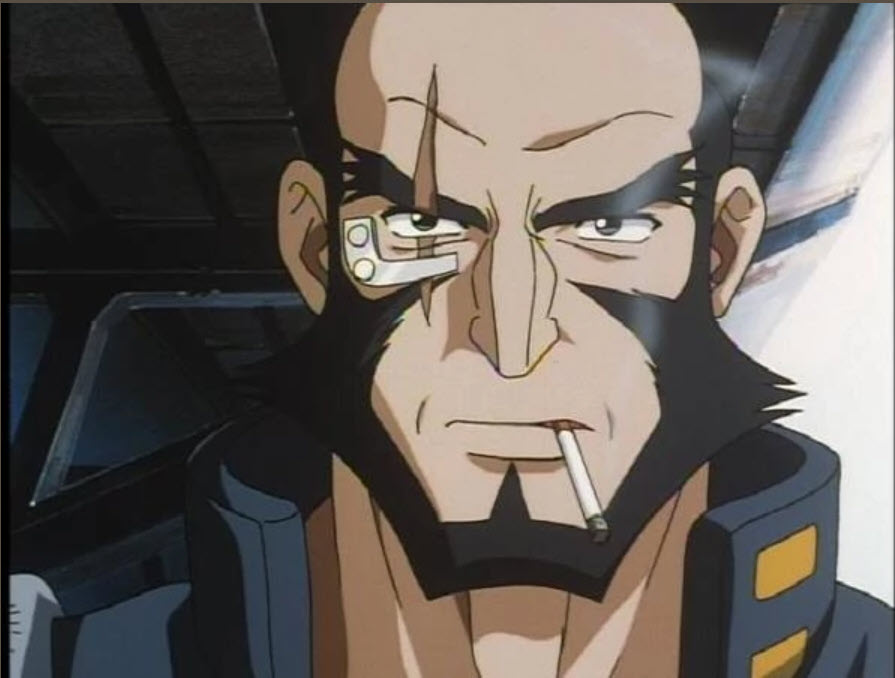 “Jet was born on December 3, 2035 on Ganymede. He developed a love of blues through his mother and would often get advice from his grandmother as well as life lessons from his father. Growing up with strong morals, Jet enlisted in the Inter-Solar System Police (ISSP) and soon became an investigator. Due to his stubbornness while chasing criminals, he earned the nickname “Black Dog,” the dog that bites its prey and never lets go.

Jet possesses a tall, broad and muscular appearance. He is balding and only the sides and back of his head have hair. His sideburns continue down his cheeks to form a beard. His left arm is a synthetic, robotic limb that seems to heighten his strength. His original limb was lost when he was ambushed by a syndicate assassin and his crooked cop partner. The metallic piece under his right eye has no known purpose, but it is not likely a cosmetic choice.

He wears a flight suit most of the time, but has been known to dress up for trips to a nightclub or casino. The scar on his face may imply that he has been in some fights as a cop and bounty hunter. The scar is directly over his eye, but the eye itself is apparently unharmed.

Jet, as the senior member of the Bebop, is presented as mature, wise, and austere. He often gives wise advice to his companions and always shows great patience for their over the top attitudes. In particular, he is very patient with Spike, although the excessive exuberance of Spike while chasing after bounties often prevents them from collecting the total reward due to refunds caused by damage. Although everyone on the Bebop considers him kind of a father figure, a situation proved by his occasional scolding for some of his companions’ attitudes and him being the ship’s cook, Jet proves to be considerably offended by this association as it makes him look older than he actually is.”

Perfect match Debra Zane! Perhaps she is making atonement for the “whitewashing” done with Katniss Everdeen in The Hunger Games movies. 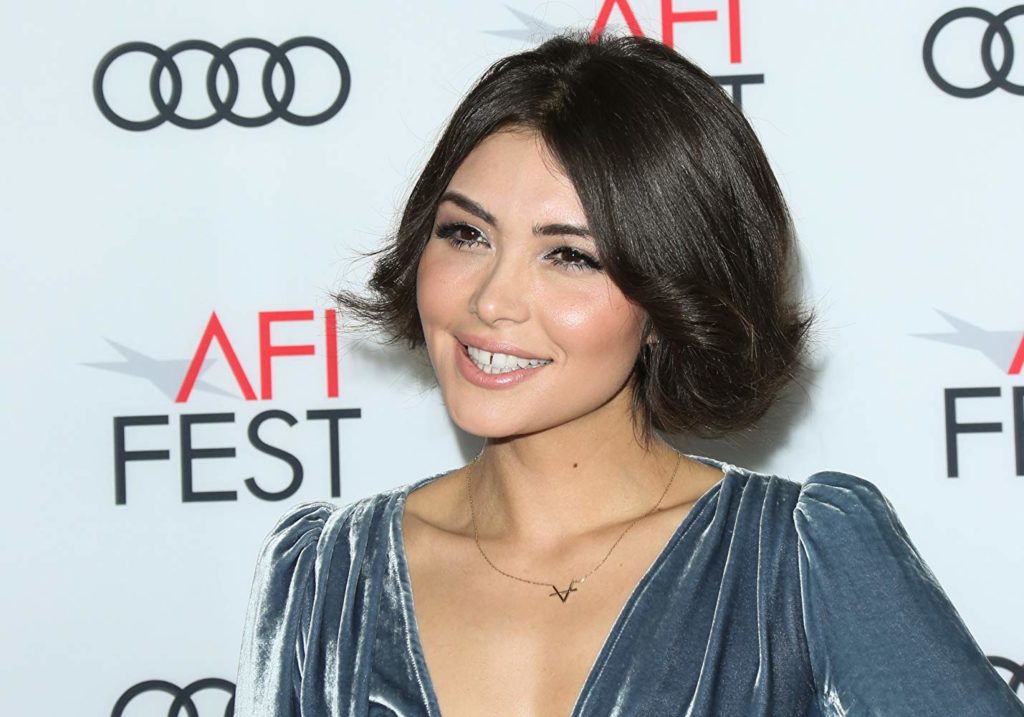 Daniella (The Vampire Diaries/The Originals), will play Faye Valentine. I know nothing about her as the only thing I may have seen her in is the one episode she did in Homeland in 2012. The other few things she has done would have not interested me to view. 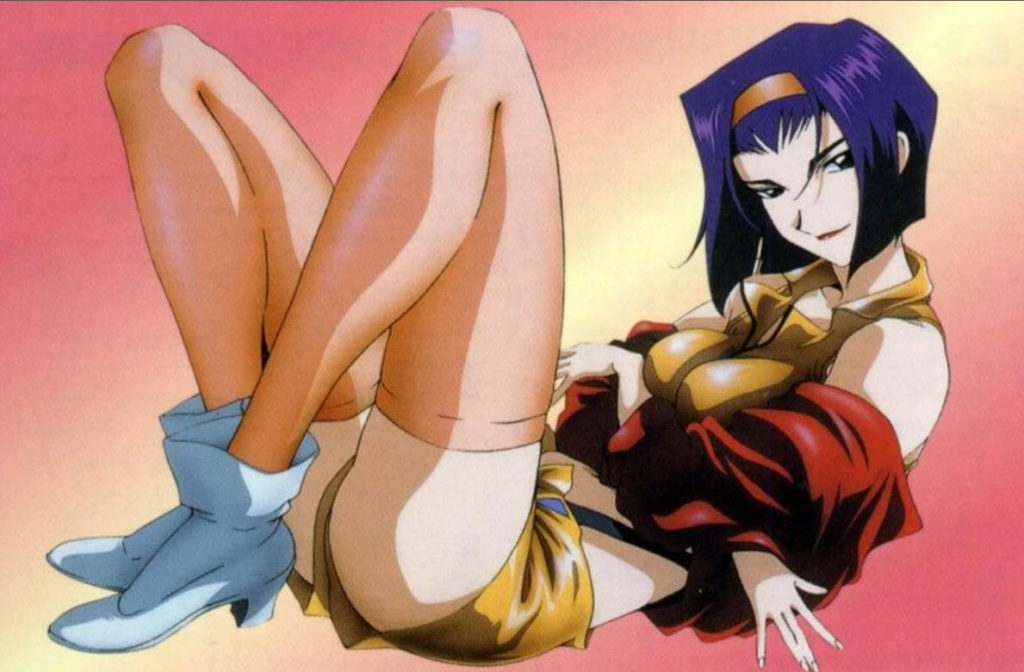 “Faye was born on August 14, 1994, on Earth, in Singapore, as the daughter of rather wealthy parents. As a child, Faye was shy but very positive and outgoing with her friends. She was a cheerleader in high school.

In 2014, at the age of 20, Faye traveled into space with her parents on a private spacecraft. An accident occurred on the ship, killing both of Faye’s parents and severely injuring her. Faye’s injuries were so serious they could not be healed with conventional medicine, so she was cryogenically frozen until a cure could be found for her condition.

In 2068, fifty-four years later, Faye was cured and revived in a clinic called Cold Sleep. Doctor Bacchus and his assistant, Manley, performed the operation and informed her that she now has a debt of 300,028,000 woolongs due to the long recovery. Faye suffered amnesia and was therefore frightened about her situation. Unbeknownst to her, Bacchus also schemed to take advantage of her. He gave her the name “Valentine” and enough details to create an identity for her.

Unable to pay any of her debts, Faye chose a life on the run, conducting small scams and stealing goods. Because of these activities, she incurred a bounty of 6,000,000 woolongs placed on her head.

Being betrayed by the very first people she ever met after waking up had a profound effect on her new personality. It formed a new personality, one that is untrustworthy, scheming and irresponsible. She developed trust issues and usually didn’t form strong bonds with anyone unless under the influence of alcohol.”

Last time I checked, Mexico is nowhere near Singapore, so some may say that this casting choice is somewhat odd. Yes, she was born in California but is credited as being a Mexican-American actress. 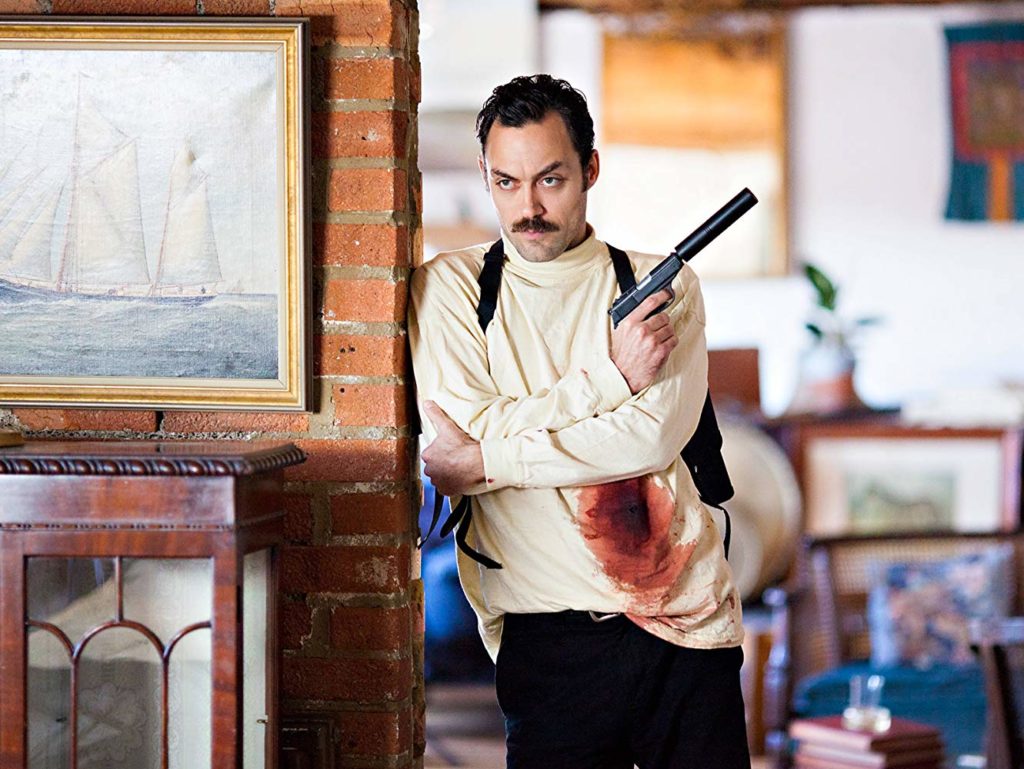 Alex has an extensive list of characters on TV shows in the UK and quite a few movies. I’ve seen some of the shows he was in (Robin Hood, Torchwood, Legend Of The Seeker), but I can’t recall anything about him. 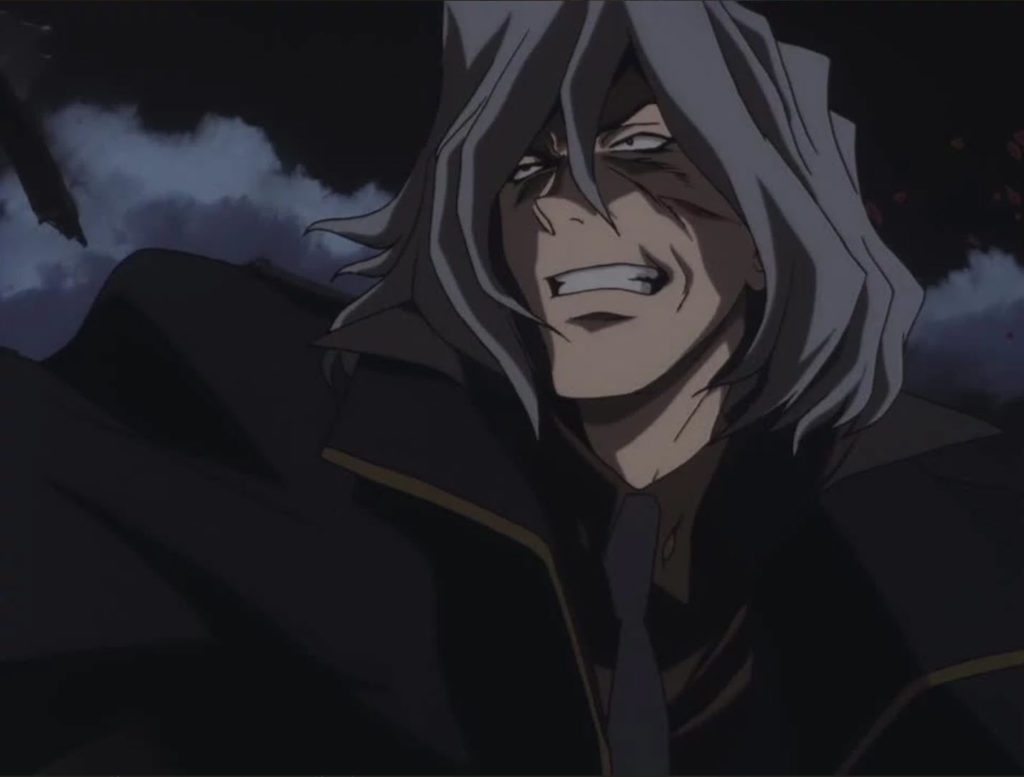 “Vicious was born in 2044. Much about his life is unknown but at some point in time, Vicious meets Spike Spiegel. Vicious and Spike rise up the ranks inside the Red Dragon Syndicate.

Vicious is a tall and thin man with gray, untamed hair. His weapon of choice is a katana. He is usually seen with his pet cormorant perched on his shoulder and his katana in hand. Vicious is 27 years old, though appears older due to his grey hair, the deep bags beneath his eyes, and a generally worn face. His elderly appearance at his young age could possibly be attributed to the events on Titan, some event linked to it, or his implied Red Eye addiction. He usually appears with a scowl, although there are a few scenes in which he smiles albeit sadistically due to his nature.

Vicious is portrayed as a cold, sadistic, ruthless, bloodthirsty and ambitious man who prefers solitude over company. He is perceived by many people to be the dark half of Spike, basically showing the same indifferent attitude towards everything, although more sociopathically and less passive. He also shares with Spike a strong cynicism and rather similar opinions on life and several ethical issues.”

As I noted before, I can’t recall any of his performances, but if he can do crazy, he could be the star of this show.

Oddly, there has been no information on who they are looking for to play the 13-year-old girl named Edward Wong Hau Pepelu Tivruski IV. Having a female tech wiz that goes by the name Ed should have been the first one cast knowing how Netflix works. 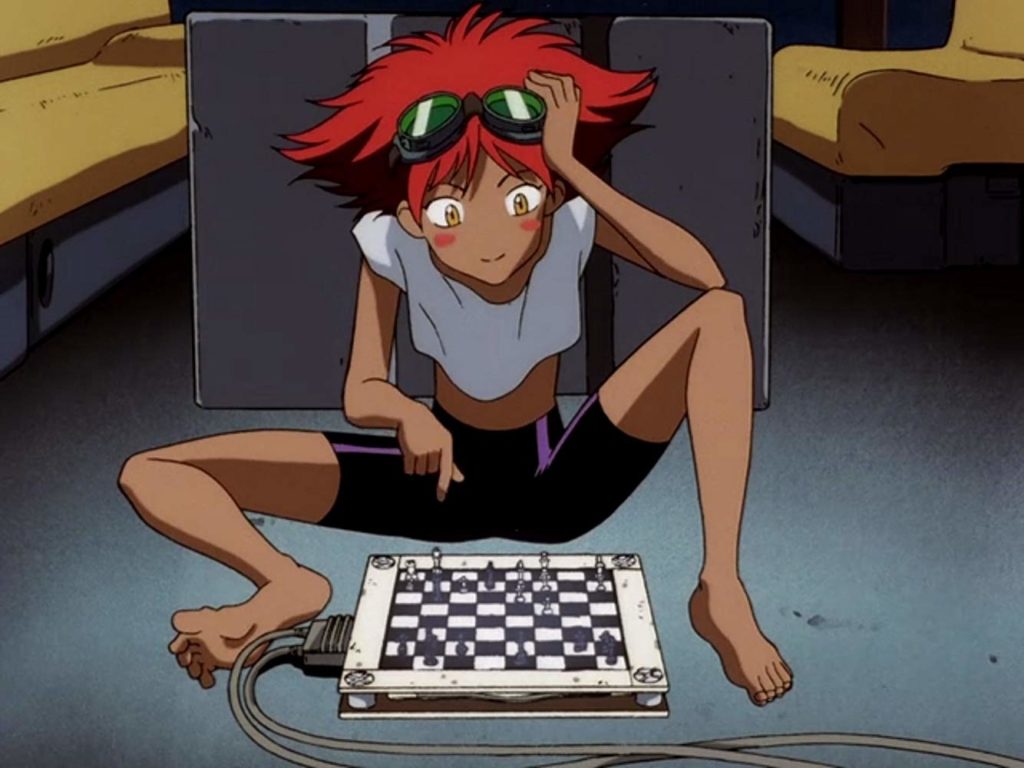 My guess is that Ezra Miller is too busy with crappy Fantastic Beasts sequels and trying to get the stupid looking Flash movie made. 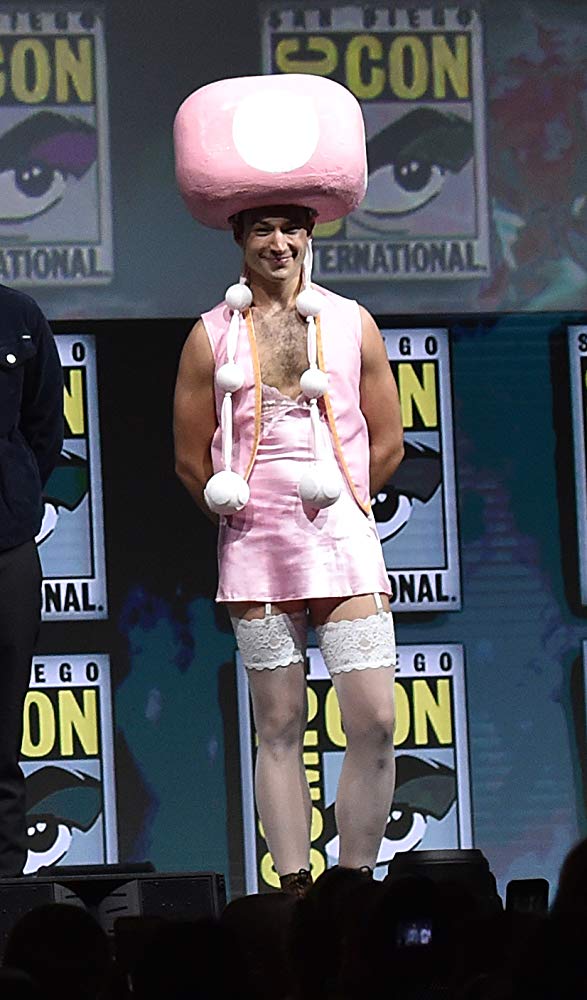 So folks, what do you think about this casting news? 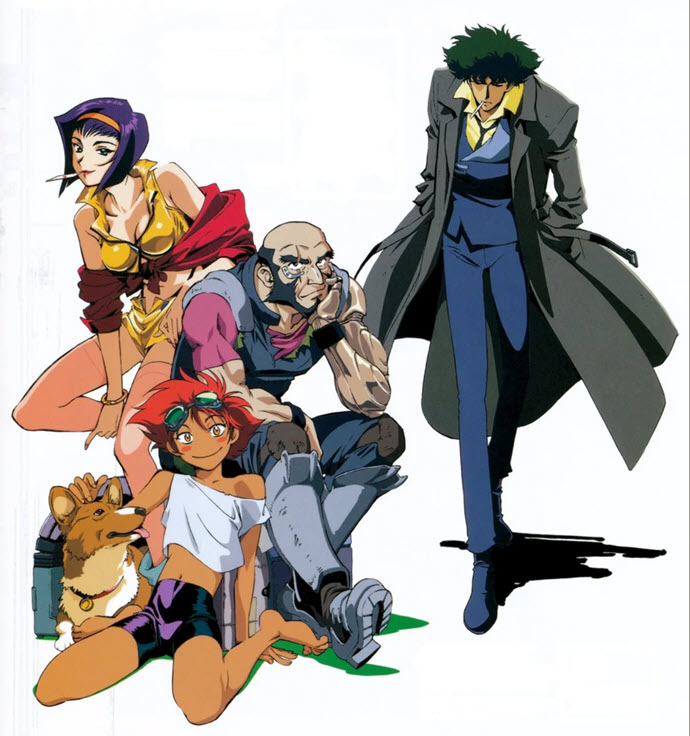