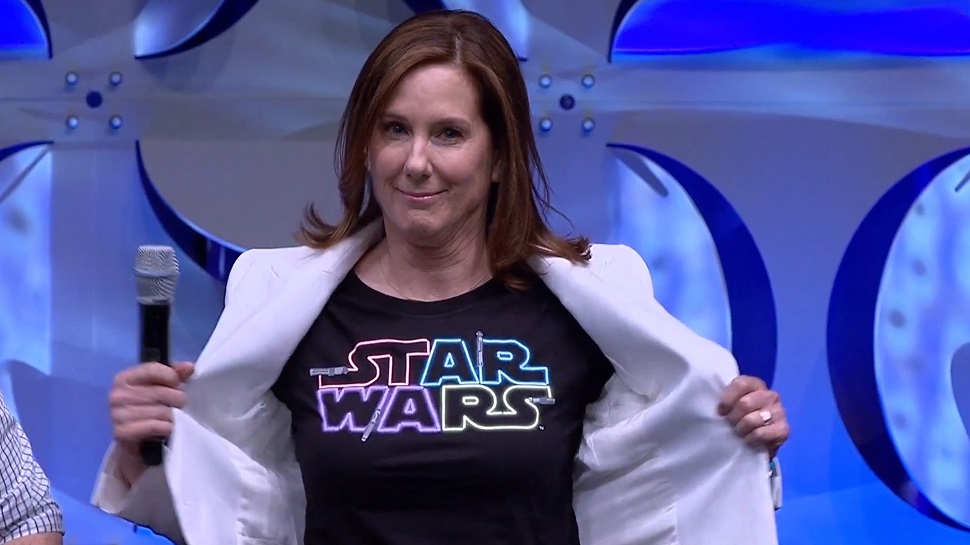 Well That Was Unexpected

For some time we have been told that September would mark the end of Kathleen’s reign of terror at Lucasfilm.

Instead she received a three year extension. 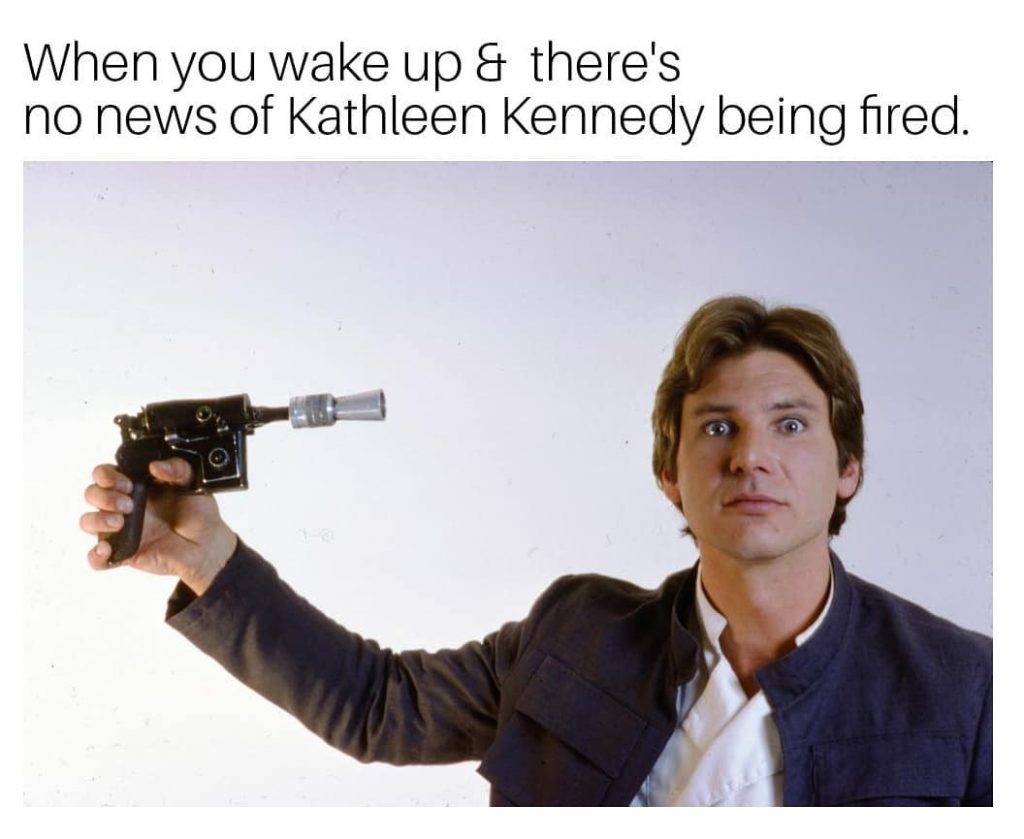 While it had been rumoured on several movie sites and YouTube channels that Kathleen Kennedy’s days were numbered, I always had in the back of my head: #metoo.

Would The Mouse fire a much-lauded female Movie Producer? Could they take the heat after the outcries of the James Gunn dismissal?

Part of me was hopeful, but my low expectations out of Hollyweird told me to expect the worse. Frankly, the damage was already done; The Farce (Force) Awakens, troubles on Reshoot (Rogue) One, The Lousy (Last) Jedi, and the problems with Soylo (Solo) certainly created a shadow larger than the Death Star could cast over this franchise.

On top of this you have the leader of Lucasfilm that went out of her way to disparage the (mostly) male audience, pushed a female-driven agenda in front and behind the screen was a real concern. Then you have people under her employ attack fans that had (justifiable) complaints about the franchise, actors/writers blaming fans of being ‘toxic’ and with an attitude “we don’t care”.

Should We Care After All Of This?

More introspective of the person that was rewarded on Friday. 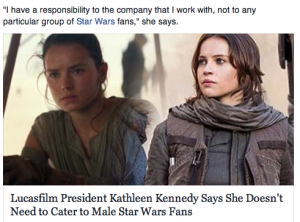 “It’s not just about casting female protagonists. It’s gotta be across the board throughout the industry.”

“I don’t analyze things all the time, I just do them.”

“Sometimes women don’t take the initiative that they should.”

“When I joined Lucasfilm, I immediately saw the true passion shared by ‘Star Wars’ fans around the world.” – Then completely stabbed them in the back just like I did with George!

“Inside Star Wars are values that mean something to people. It’s aspirational. It’s full of hope.” –That I must crush! 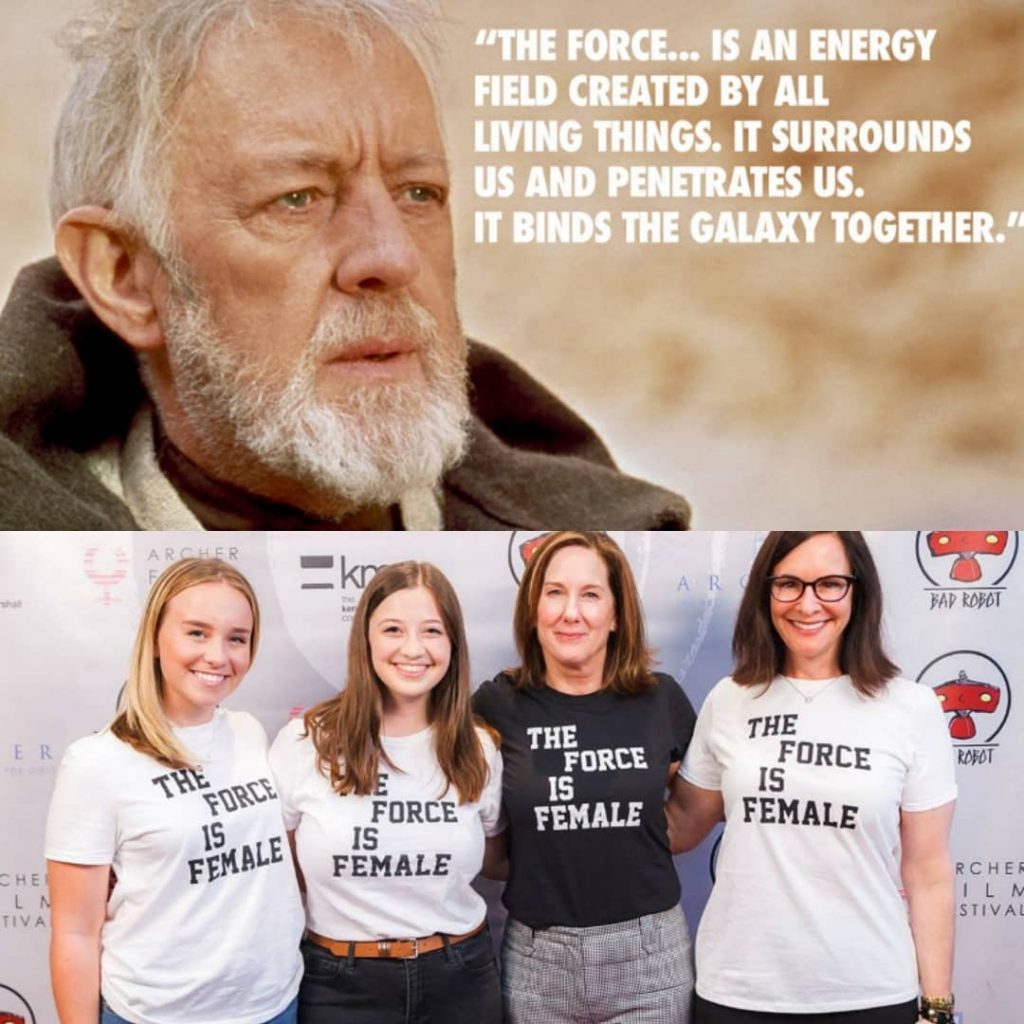 Looking online with some of the “major” entertainment sites, I noticed a pattern. They pretty much stated that the renewal was a “vote of confidence” in her performance, the collected films did bring in over 4 Billion dollars, covering what Disney paid George Lucas.

The merchandise has also accumulated at least another billion (no actual figures are provided). The one blip with Solo was really more about franchise fatigue and that is the fault of Bob Iger (white male).

Don’t take my word for it, I spent the afternoon going over a dozen sites about this deal. Here are some highlights, (with links):

MIA, more concerned with “boofs” and “Devil’s Triangle” at the moment to give this story any thought.

Kathleen Kennedy has reignited her lightsaber. The lead producer and architect of the Star Wars franchise has renewed her contract to remain president of Lucasfilm for another three years

The move is a vote of confidence in Kennedy…

Sources say that the near future of Star Wars lies in television with Kennedy-led Lucasfilm planning on expanding the universe with new characters in that medium.

The force is strong with Lucasfilm president Kathleen Kennedy — for another three years, to be precise.

The re-up comes as the division gets back on solid footing following Solo: A Star Wars Story, the… Solo spin-off that suffered disappointing box office returns and behind-the-scenes drama…

Following the spectacle, Kennedy endured the rare scenario of both the industry and worldwide moviegoers speculating over her fate. Hot takes flowed.

Read the comments at the end of that article, 90+% think that it’s a bad idea and will not see any SW related films for three years!

I need a medal and several beers for having to read this tripe:

The future of the Star Wars franchise is both exciting and uncertain at the moment.

Kathleen Kennedy has shepherded Lucasfilm in the Disney era and been the architect of the new Star Wars franchise. Under her, the new Star Wars films have grossed almost $4.5 billion dollars at the box office, easily covering the $4 billion Disney paid for Lucasfilm, and that’s before all of the other money the franchise has brought in. This contract renewal is seen as a vote of confidence in Kathleen Kennedy and acknowledgement of the amount of success that the relaunched Star Wars has had under her leadership.

Several outlets spread unsubstantiated rumours that Kennedy was to be ousted by Disney. It now seems those rumours were profoundly untrue.

Kennedy was also controversial (read: hated with a burning passion) amongst the small portion of Star Wars fandom made up of entitled baby-men. Said baby-men saw Kennedy as pushing politics (read: politics that weren’t theirs) into the Star Wars films, largely by – shocker – developing characters who weren’t musclebound paragons of white masculinity.

? What SW heroes were musclebound?

That group of fans have attempted to boycott, discredit, harass the cast of, and even remake Lucasfilm’s output under Kennedy, but that didn’t stop every Kennedy-produced Star Wars film other than the one starring a man from grossing over a billion dollars worldwide. I tried to look at /r/incel on Reddit to see what they were saying, but it’s been banned. Ha ha.

Kennedy came under heavy fire from viewers, some of whom voiced a desire to see her replaced. There may come a day when Kennedy is no longer calling the shots at Lucasfilm, but it won’t be for another few years.

Despite recent events, Disney apparently remains confident Kennedy is the right fit for the job as the galaxy far, far away continues to expand.

The (Execrable and Exhausting) Mary Sue:

Kathleen Kennedy Renews Her Contract, Sticks It To Haters.

Despite rumors and “very reliable reports” that exist only on Reddit, Kathleen Kennedy is not going anywhere.

Disney purchased Lucasfilm for $4 billion in 2012; since then, the films have grossed $4.5 billion worldwide, and as the franchise is just getting started, it is only up from here.

Rey is a pop culture icon thanks to Kennedy’s new films.

As I’ve written about before, there are legitimate reasons to critique Kennedy’s tenure at Lucasfilm, mostly involving her commitment to diversity on and off screen. But with her contract extended, there is time for her to course correct some of those mistakes, especially the lack of women behind the camera on her films and television shows. However, the tendency to blame her for all of Lucasfilm’s missteps is a little much, and something we don’t see with male studio heads.

Rogue One was a success, and it might have been Kennedy’s decision to authorize reshoots that saved it from being a failure.

firing Colin Treveorrow? That was a smart move before they let him write a scene in which Rey runs away from the Knights of Ren in high heels.

…there is room for growth. Hire more actresses of color (and then don’t kill off their characters). Hire more writers and directors of different backgrounds. Continue to fight for representation in front of and behind the camera.

If, three years from now, the films are still dominated by white men behind the camera and most of the heroines are still white women, we can talk about finding a replacement. Until then, let’s stop using Solo as a way to undermine her every time we talk about her, okay?

When you stare into the abyss… ???

For those that think she is doing a good job, first get your head examined and watch these:

The Den Of Nerds:

Let’s Look At Some Numbers

Per IMDB, Kennedy’s (US BO) results for all films she has produced:

To put it into perspective here are some other Producers of note.

The woman behind the X-Men franchise:

Has produced some of my favourite films, (Terminator 1-3, The Abyss, Aliens, Hulk 1&2, looks to have moved onto TV projects now:

Very interesting! I think she is worth looking into further (tied to Chris Nolan projects):

Yes, I purposely reported on female Producers, she is not the only one, nor is she the most successful (per average).

If Disney is so obsessed with diversity, perhaps have a look at some of these ladies.

At this point, I have to say that perhaps it’s time to move on. I have many hobbies and so many other movies, books and TV shows to catch up on, therefore I can endure this period. If I ever want to visit that place that is “A Long Time Ago in a Galaxy Far Far Away” I can always go here: 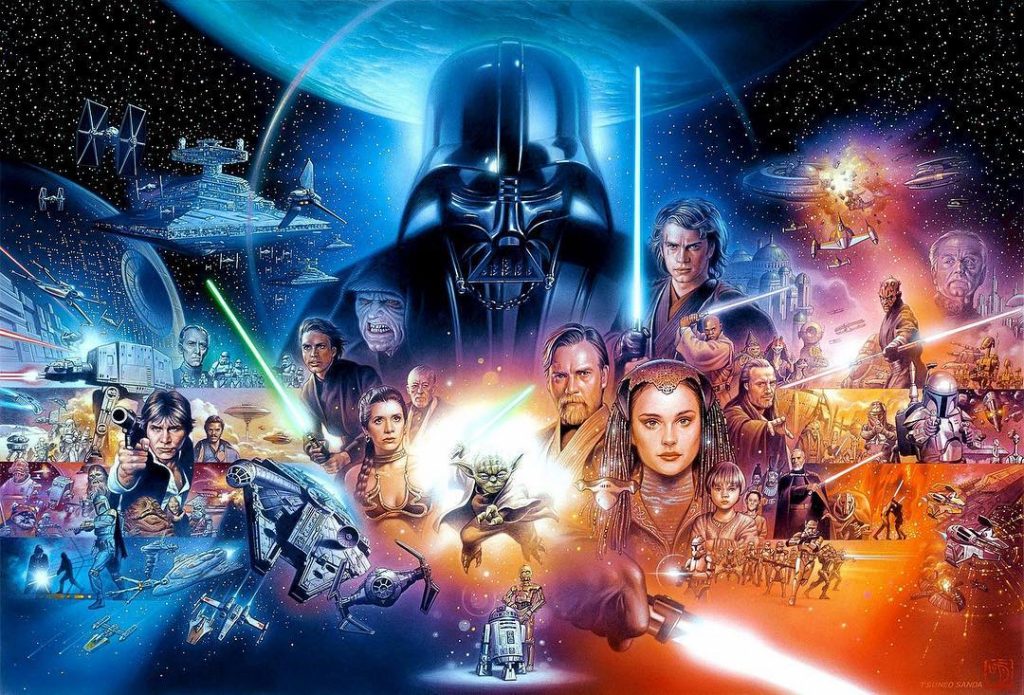 For the rest of it, to paraphrase John Boyega:

One more thing, and most importantly, for those that still have hope for the franchise, the silver lining is this – three years is not a long time in the movie business. She may only have one more movie after Episode IX and some TV properties.

Therefore after 2021, someone else that actually gives a damn about the property can make something good.

May The Force Be With You, Always.