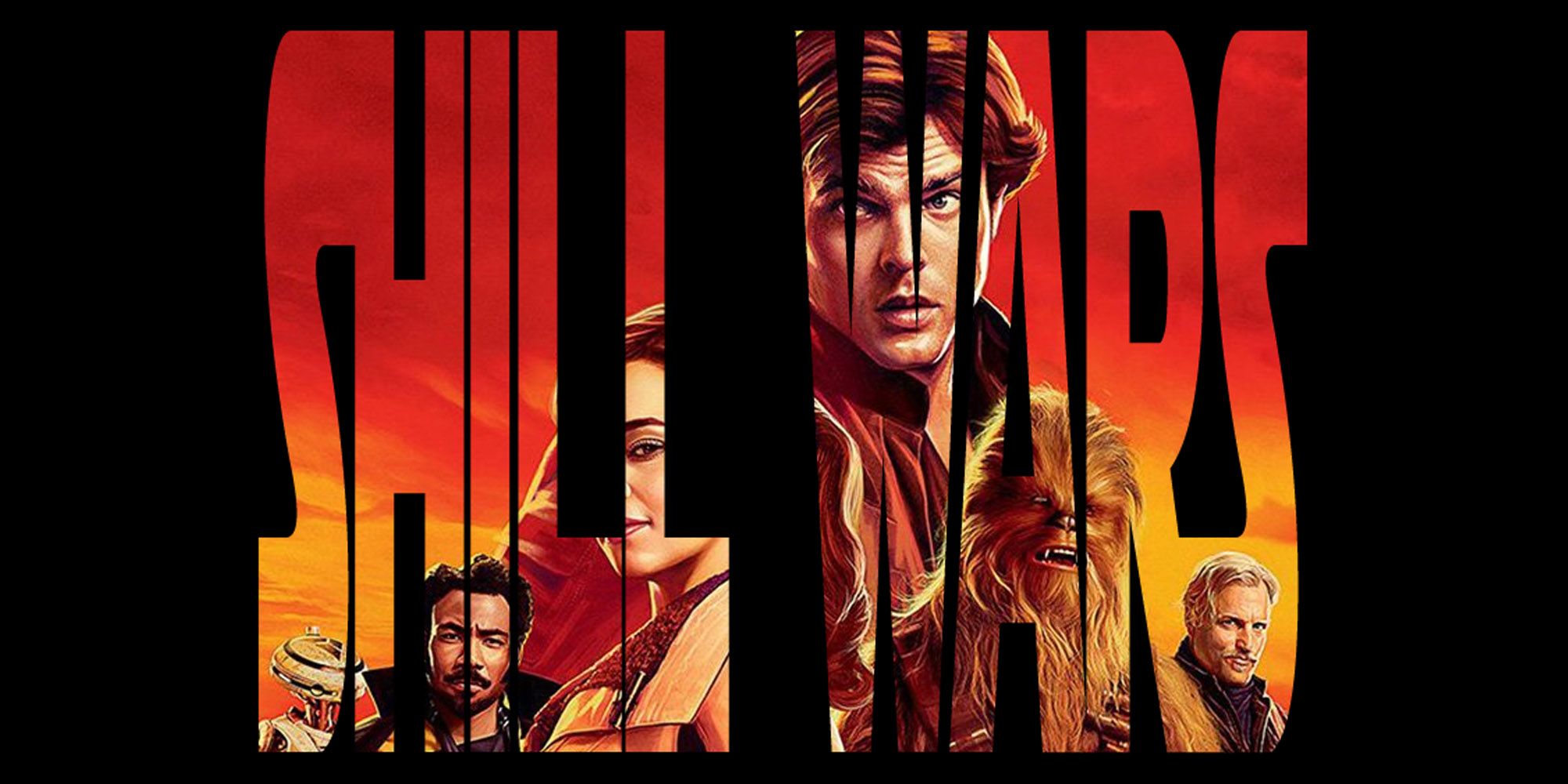 Let the record show that the Hollywood Shill Machine went into overdrive on Thursday, May 3rd for Disney’s upcoming Solo: A Star Wars Story movie.

Within minutes of one another, several, *ahem*, reputable industry rags like Variety, The Hollywood Reporter, and Deadline posted nearly identical stories touting the wildly optimistic opening weekend projection of $160-170M plus for this film.  Deadline even had the balls to write

Sources tell Deadline that Solo‘s tracking is “pretty strong” with an unaided score of 28 that’s higher than Rogue One: A Star Wars Story ($155M, 23 score) and Guardians of the Galaxy Vol. 2 ($146.5M, 23). Unaided awareness indicates how strong the buzz is on a title among those who are unprompted in polling and it’s a priceless stat off which studios buy their TV ads. Definite interest of 55 is higher than Spider-Man: Homecoming‘s 53 and that latter pic opened to $117M. Males under and over 25 are the dominant demo here for Solo.

Now…you’re obviously a smart person, since you’re at Film Goblin and you’re probably asking yourself “Wow, so males under and over 25 are the target demographic?  No kidding!”  Your second thought was probably “Yeah, so what? Who gives a shit?”

If You Love(d) Star Wars, You Probably Should Give A Shit

That is a fair and valid question, dear Film Goblin reader, and normally, I’d agree that it doesn’t mean much. However, we live in dark and nefarious times. The Last Jedi was an out and out financial disappointment for Disney, despite the mainstream narrative of it being a wild financial and critical success.

“How can a movie that grossed $1.3B worldwide be a failure?”, they repeat. $1.3 billion *is* a lot of money, and for any other franchise, would be an incredibly impressive haul. However, let’s remember that internal Disney forecasting for this movie was anticipating $2 BILLION worldwide in box office gross for The Last Jedi.

That’s $700 million bucks that Kathy Kennedy and Rian Johnson left on the table. Do you think Bob Iger, who is stressed beyond belief with trying to schmooze regulators to get this $60 billion Disney/Fox deal approved, is happy that one of his most valuable properties missed its target by almost a billion bucks?  Yeah, I don’t think so.

Further, I’m sure you’ve noticed, but Star Wars financial performance is trending down around the world. The Chinese box office take is actually a pretty big deal nowadays. JJ Abrams’ The Force Awakens grossed $124M in China, which is okay, but Disney obviously was hoping for more from the world’s largest movie going population. The Last Jedi did even worse, grossing only $42M. That’s a 66% DECREASE, homes.  I don’t know what kind of career you’re in, but that kind of performance usually gets people shitcanned where I’m from.

Everybody knows that the Solo: A Star Wars Story production has been a galactic sized dumpster fire from the start. Film Goblin has covered most of this already, so I’m not going to repeat it here.

I find it curious that, after all of that, various media organizations are now independently arriving at approximately the same projection.

What an amazing coincidence!  Even more curious, they are all arriving at that number and posting about it at the same time.  I mean…what are the odds of that?

Hollywood Is A Wretched Hive Of Scum And Villainy

Hollywood is a incestual business. These rags stay in business because people who are part of, or follow, the movie business, buy them and buy ad space in them.

These publications WANT these big tentpole movies to succeed, because it helps drive interest and dollars to them, and gives them shit to write about. Variety and The Hollywood Reporter are basically remora to Disney’s carcharodon carcharias.  They are shills, period.

Why This Projection Is Likely Horseshit

Maybe Disney floats a wildly optimistic projection because they don’t want to let on how much trouble this movie is in.

Maybe Disney strong-arms these rags to publish it so that mainstream media pick up on it and also report it.

Maybe Joe Q. Dumbass moviegoer sees these reports, and says to himself “Wow! It sounds like this Han Solo movie is gonna be a hit! I better reserve my tickets for me and Mary Jane Rottencrotch now!”

Disney manipulates the machine to change perception of the film, from one of utter and abject failure to something more positive.

We Ain’t Gonna Fall For No Banana In The Tailpipe

You — the Film Goblin reader — are smart.  You are passionate about movies, and you know when you are being spun.

The mainstream media may be fooled, but you won’t be.

Disney can try spinning this thing all they want, but we’re not gonna fall for that jive.