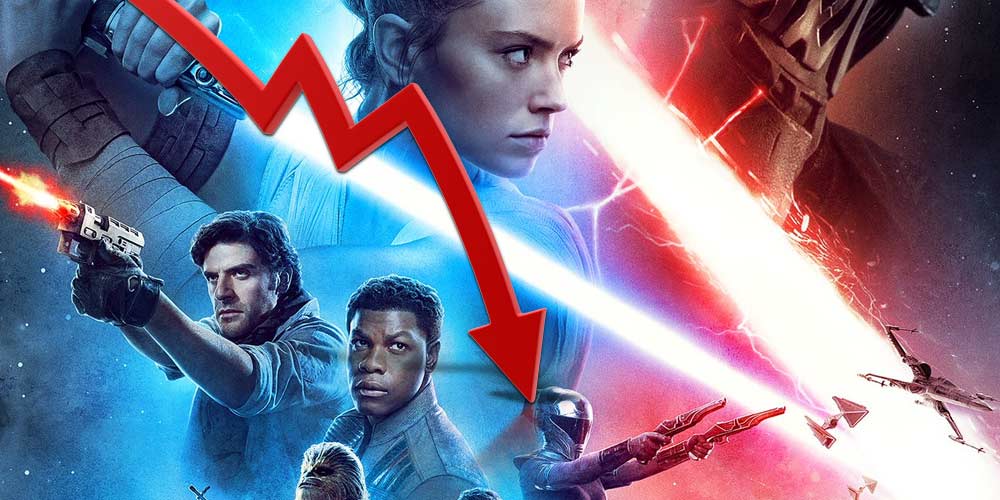 Well, well, well, from the trades, it appears that ticket presales for Star Wars: The Rise of Skywalker are tracking a little lower than expected by this point.

For your Black Friday, from the trades:

We’ve been hearing for quite some time from exhibitors and distribution sources that advance ticket sales are strong, but not overly robust for Disney/Lucasfilm’s finale Star Wars: The Rise of Skywalker, meaning in the way that they were for 2015’s Force Awakens ($247.9M) and 2017’s Last Jedi ($220M).

Translate that into “real people” speak: The presales are lower because we’ve been lurking on the non-shill sites in the background and the true fans aren’t going to show up for this one.

But surely, the shill reviewers and some media appearances will drive interest now a month out from the Christmas Day drop?

…early AM estimates for the J.J. Abrams movie hitting tracking, when averaged are at $205M given the comparative titles provided.

The following are comparative titles:

$205 million? On a threequel? The end of the greatest hero’s journey tale of all time?

Yousa in some big doo-doo.

The Reviews are Going to be Shilling

But Disney has the entire media complex on their side, so the reviews and the pre-screens write-ups by Rotten Tomato critics will push sales closer to the premiere date.

As is typical with tracking of late, if reviews are bad for Skywalker, and we hope not, then all projection gas here goes out the window. The world Hollywood premiere for Skywalker is on Dec. 16 and will be screening for critics and media around the same time. When Skywalker reviews break should they report that this threequel is course-correcting the left turns that many fans griped about in Rian Johnson’s Last Jedi, word will break out like wildfire and the sky is the limit when it comes to this threequel’s opening.

And the presales are indicative that the shill entertainment media may be able to drive casual fans, Disney+ subscribers, and people who enjoy the feels of The Mandalorian, but there’s nothing that has been revealed so far that indicates a “course correction” for the true fans.

Oh, if the reviews don’t work, then clearly getting the actors out into the world will:

Working in Skywalker‘s advantage is that Abrams, and stars Daisy Ridley and Adam Driver are already hitting the talk show circuit to generate heat.

Mmm. Adam Driver is generating heat. Of course, so is John Boyega.

Forget about Kathleen Kennedy’s Rolling Stone article and Bob Iger walking around talking and all of the smoke generated by, even negative attention to the flaws in The Rise of Skywalker trailers, leaks, rumors, and promos so far. Keep watching the skies and we’ll keep tracking the numbers all the way to December 20th.