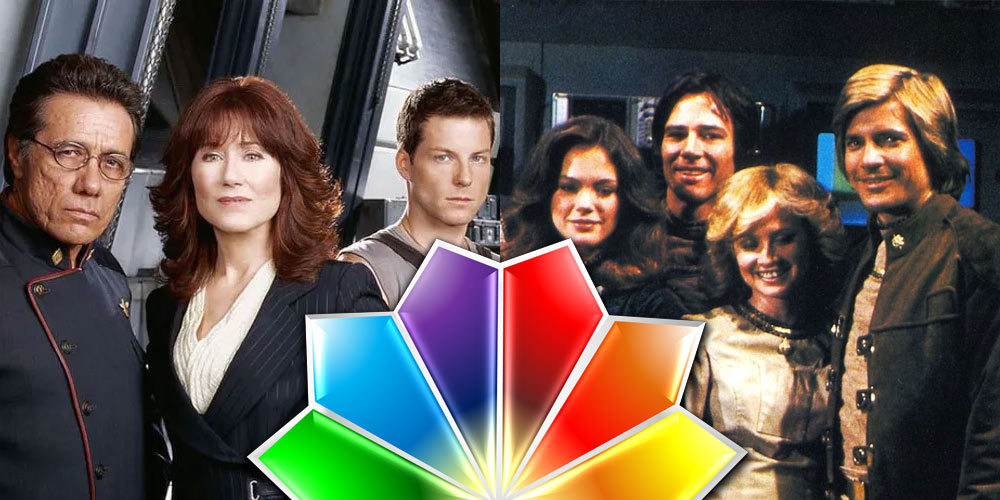 We Did Not Ask For This

NBC unveiled its new streaming platform today September 17th, 2019 and it shall be known as Peacock.

Peacock already has over 15,000 hours of programming to begin streaming into the heads of West Wing and ER honks but that is not enough!

Mollah, the dark Demon-God of Reboots, demanded a sacrifice to bless the launch of Peacock and his worshippers lifted the revered Battlestar Galactica onto the altar.

Battlestar Galactica was originally launched in 1978 as the Mormon answer to Star Wars. It followed the adventures of the last human space ship — The Galactica — after the destruction of the Twelve Colonies of Mankind. Together the survivors search the galaxy for the lost thirteenth colony of Earth.

Or was it Kolob?

In 2003, Syfy Channel launched one of the only successful reboots in entertainment history when it brought back Battlestar Galactica and replaced the Mormon fleet commander with Edward James Olmos while making the heroic Mormon pilot Starbuck a woman.

Fortunately, no one in the cast or crew got on a soapbox and made a big deal about it, choosing instead to let the characters and action speak for the show.

And speak it did, both through the action…

… and through the characters… a little natural character, if you know what I’m saying:

Of course, audiences loved it.

The Cylons were not fucking around with Humanity. When these machines rebelled they didn’t try to bargain with, enslave or hunt down mankind — they started dropping nukes all over the place.

Except, unlike the Terminator franchise, we got to see the survivors horrified reactions when cities and planets just disappeared in the atomic fire.

Then Humanity got pissed and started dropping nukes too.

We don’t need another version filled with social fiction and lecture material.

Sam Esmail, executive producer of Mr. Robot and Homecoming is set to be showrunner.

Which means we are in for hardcore drug use, degenerate sex and other perversities.

Look for that female Starbuck to be brought back in some form or fashion for woke nostalgic points. After all, the actress’s name is Katee Sackhoff — sack off, boys.

Do not look for Canadian actress and model Tricia Helfer to reprise her role as the sensationally sexy Cylon Number Six.

That would, of course, send the wrong message to shrews, hags and catmoms.