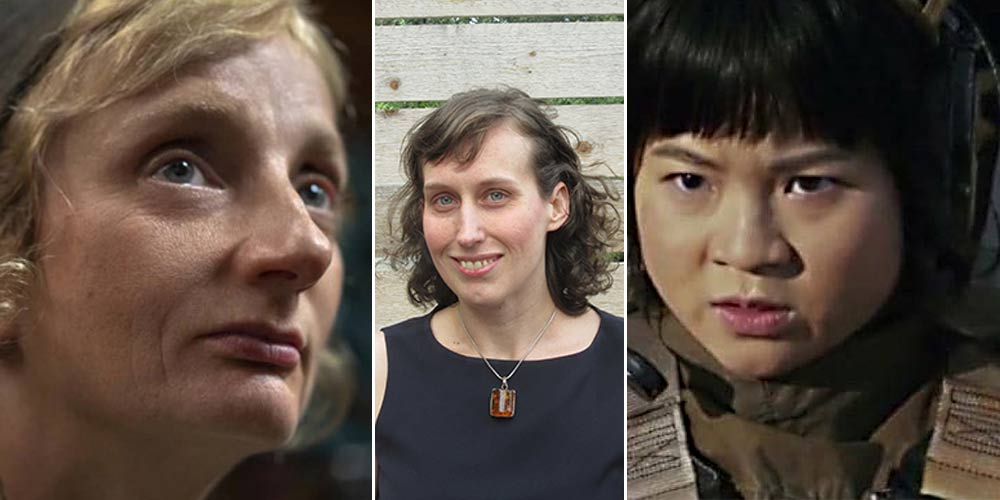 It is only when the Progressive left cultural machine feels as though it has failed to adequately blanket the world with agreement and compliance, that you get tone-deaf, cowardly opinion pieces about pop culture, like this one from the Washington Post today.

How #TheRiseOfSkywalker learned to stop worrying and love the alt-right Star Wars trolls – By me.

This piece owes a big debt to research by @InFormalMajesty https://t.co/aritAOcUsD

Bethany Lacina, associate professor of political science from the University of Rochester and “life long Star Wars fan,” was granted permission and platform access to take on the great imaginary anti-Star Wars bogeymen of “white men,” “the alt-right Fandon Menance” and “TLJ backlash,” by the Washington Post.

You know, the glorified fish wrapper that’s keeping the “light” of Democracy on as it “dies in the darkness” of the presence of The Bad Orange Man.

Many observers see TROS as an apology to TLJ haters. Of the 53 TROS reviews by “top critics” archived on Rotten Tomatoes as of Jan. 15, 44 describe the movie as a reversal intended to win over the fans that disliked TLJ.

TROS invites the perception that it is made with conservative, white and male audiences in mind.

After suggesting that there would be a same-sex relationship in TROS, filmmakers included two women kissing in the background of a scene — a moment easily censored for overseas markets. TROS nearly eliminates the character Rose Tico, played by Asian American actress Kelly Marie Tran, who was the focal point for right-wing hate after her large role in TLJ.

And here we go.

When The Media Serves You, You’re This Tone Deaf

The premise that underlies this entire opinion piece from Lacina should be obvious, but let’s be fair: She only sees the media that she likes and that supports her worldview, which is pretty much 90% of the mainstream film and entertainment and political media, so when she encounters resistance, she doesn’t know how to mentally categorize its presence.

THIS! Lucasfilm knew limiting Rose Tico's screen time would "prove" that the racist trolls won. At best, they decided they could live with sending that message. https://t.co/OK7abAibTr

The most visible Star Wars fan media is made by white men. For example, until 2018, the Star Wars website included links to fan podcasts, which I collected for past research. Thirty-eight of the 56 shows had male hosts. Only one had a person of color as a host.

Some of these fan media outlets supported the TLJ backlash. For example, Rebel Force Radio, one of the oldest outlets, pivoted to cater to a right-wing audience.

Fans who feel slighted by TROS’s politics will not have a comparable platform. Female, nonwhite and LGBTQ fans control fewer fan outlets. They also experience more online harassment, discouraging them from engaging with the larger fandom.

Yes, well, when you’re incompetent and can’t be creative because you’re ideologically driven rather than creatively driven, you’re only going to make “transformative” things.

All of You On The Left Own Star Wars Now. Enjoy It.

The ilk that creates “transformative” things, of course, ignores The Mandalorian and the rise of the garbage that ranges from Baby Yoda to a deepfake Carrie Fisher and dismisses the gutting of Star Wars history and canon by a rapacious and greedy Mouse House.

They believe that carping about any of that is a sign that the complainer is the weak one and that they are strong.

I guess what I'm saying is, thank you for the movie @rianjohnson. I went to see TLJ on a lark — thought I'd lost interest in Star Wars years ago. I didn't realize how moving it would feel to see that those myths might include me. Feel like I've lost a lot.

They also believe that The Mandalorian is a sign that Disney is really “alt-right” after all, and they will work tirelessly to root out any signs of weakness and deviation from the left-wing, social justice, intersectional ideology in any Star Wars that comes about in the future.

Right-wing anti-TLJ content was helped along by non-Star Wars media, as well. Dismay with TLJ was part of coverage of right-wing cultural grievances in outlets such as The Federalist and National Review and by alt-right influencers, including Ben Shapiro and Jack Posobeic.

There is no comparable left-wing media ecosystem where anti-TROS feeling can thrive and be monetized to the same extent.

Except for, of course, the entire media ecosystem and shill entertainment media system that you based your “research” on for this opinion piece.

If you are a reader, commenter, viewer or contributor to sites like these and others, who have spent the last few years looking at the reality of Disney, Star Wars, and understand–with growing horror–the nature of the shill media pushed narrative of a growing and “new” “fan” base on the left that is being monetized by Disney, take heart.

Opinion pieces like this one by Lacina are signs that the voices of reality are breaking through the delusionary fog of the left.

Case in point, the top comment in response to the article is as follows:

What a stupid thing to write.

The issue with Star Wars was the LOUSY WRITING, LOUSY CHARACTER DEVELOPMENT, and LOUSY DIRECTION.
So, the problems:

Rey was a Mary Sue.  And we’re not talking your regular Mary Sue, she was the most powerful Jedi in ‘Star Wars history’ by such a large margin, all without any sort of training, that it was ludicrous even by Mary Sue standards.

Finn was given the short-shaft, including being made a bumbling fool in the second movie.

Poe was given the shaft in the series.  Made into a hot-headed, bumbling idiot for most of it.

Tico was a joke and her whole character arc was a waste.

Holdo was a joke, worst Admiral ever.

Luke was turned into a defeatist, cranky old-man.

And, of course, the Kennedy crapped on the entire expanded universe and all the Star Wars cannon which was further crapped on by two clown directors who’ve managed to ruin every franchise they’ve gotten their hands on.

And thanks to Jar Jar Abrams, the Star Trek reboot is on hiatus for the foreseeable future.

Go check out the rest of the comments — via archive.is, of course — if you want to see just how far we’ve come.

If you are a person who believes that anything that happens in these online “alt-right” spaces is just the “meaningless carping of entitled white guys” well, NBC, ABC, CBS, CNN, CNBC, FOX News, MSNBC, all the entertainment outlets online, all the corporate marketing efforts, all the streaming services, Facebook, Amazon, Netflix, and Google, and all the disengaged people around you who lap up the remaining Star Wars pablum, are already reaffirming your worldview, so there’s nothing for you in places like this.