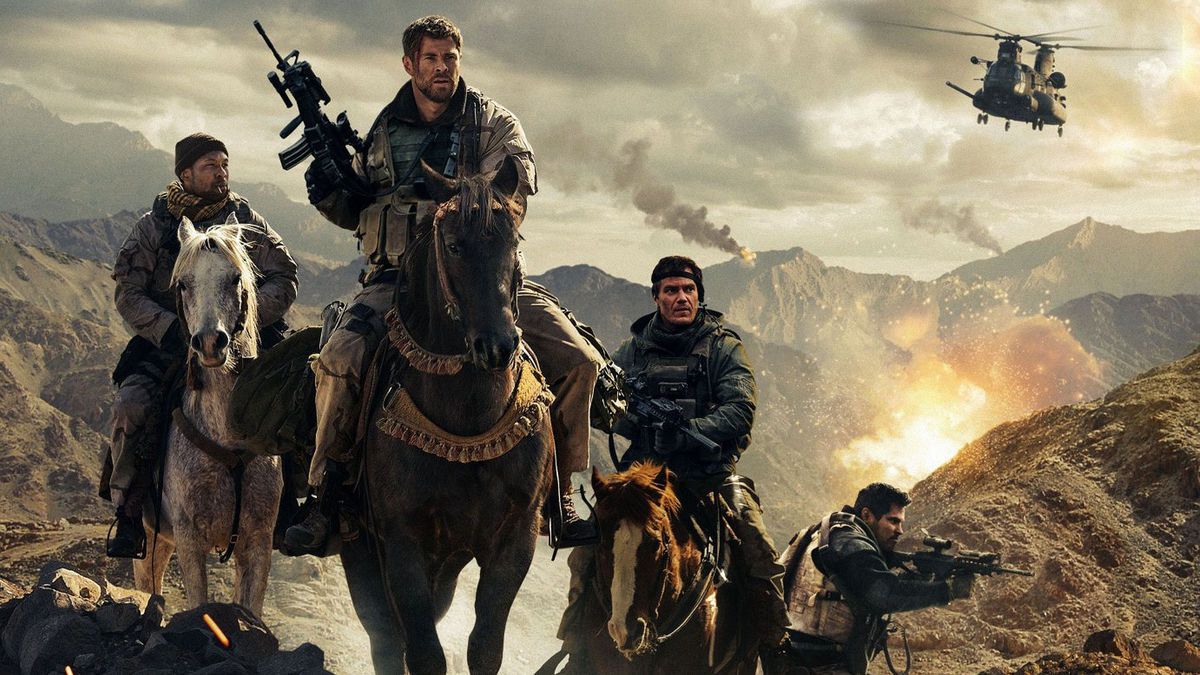 What kind of man runs toward danger? What is intertwined in their DNA to make them want to thrust themselves into combat? Mere weeks after September 11, 2001, 12 Strong US military men were tasked to do just that.

Almost immediately following the WTC attacks on 9/11, this particular mission was instrumental in getting the ball rolling in our involvement in the Afghan theater, attempting to topple the Al Qaeda network and shutter the Taliban regime. A Special Forces unit is chosen to do just that.

They are tasked to retake the Taliban-controlled town of Mazar-i Sharif in northern Afghanistan. One small hitch. They have to traverse through treacherous Afghan terrain and the only way to do it is on horseback.

After being promoted to a staff job, rising army captain Mitch Nelson (Thor himself, Chris Hemsworth) fights to rejoin and lead his team to the battlefield. Unfortunately, he’s never been to war and has to persuade the colonel in charge (an I-don’t-know-why-he’s-bald William Fichtner), before he can even get to Afghanistan.

Nelson’s dedicated warrant officer, Hal Spencer (the always excellent Michael Shannon), puts in a good word and off they go.

It’s a slow start. The standard character build-up, the family background, the supportive, yet worried wives staying behind to hold down the fort, some a little more resentful than others. I thought a lot of it was a bit cliche, but it’s that type of movie.

The real action starts when they finally meet up with Afghan General Dostum (Navid Negahban) who hates the Taliban as much as they hate him. They killed his family and he’s understandably a bit standoffish to the Americans, as well.

As in all Hollywood war movies, the two headstrong leaders find a mutual respect for one another. Long enough to get the job done anyway.

Is this a great movie? It does the job. It’s got all the explosions and gunfights. Director Nicolai Fuglsig adequately choreographs the battle sequences.

It’s got B-52s dropping their loads on a bunch of shitheads who don’t deserve to breathe our air. I thought it was a little convenient that the B-52s were always overhead at a moments notice. Sometimes, it’s not that quick, but who am I to judge?

There were a few more distractions (for me at least). I felt that every American and allied bullet always hit their mark. The horses were hardly ever hurt and good guy injuries were shockingly low (as opposed to the Afghans and enemy fighters who got shot to shit!). If you’re riding horseback on uneven terrain, shooting a military-issued machine gun, and killing every bad guy you ride by, then you, Sir, are a superhuman being and should be in another movie!

Look, I was in the military, the Air Force to be exact. I spent 20 years doing something I felt was right. I never had to eat dirt, shoot another human being or even make the decision to do so. It takes a special breed of people to want to take another human life. Could I do it? Given those circumstances, I hope so. If I had to fight those camel-humping, death-worshipers to the end, I’d like to think I’d be the bravest man alive. I hope to never find out. I scrutinize these films a lot more than I should. Sometimes I’m right, sometimes I’m wrong, feel free to let me know.

I felt most uncomfortable at the end, though. This takes place in 2001. It’s now 2018 and we as a country are still in that shit-hole. Makes you wonder what’s taking so long.

This one was a one-off for me. Worth checking out, but I probably won’t revisit it.

Although Andy Does Recommend…

You want to watch a more gripping, true-life military movie? Check out Blackhawk Down, Lone Survivor or American Sniper.

If you’re interested in 9/11 subjects, I recommend the extremely hard-to-watch United 93 or the fantastic Naudet brothers documentary. What starts out as a documentary about a rookie NYFD firefighter turns into some of the first recorded footage of that horrible day; they were the only filmmakers to catch the first aircraft flying into the WTC tower and captured some of the most visually striking images of that day.