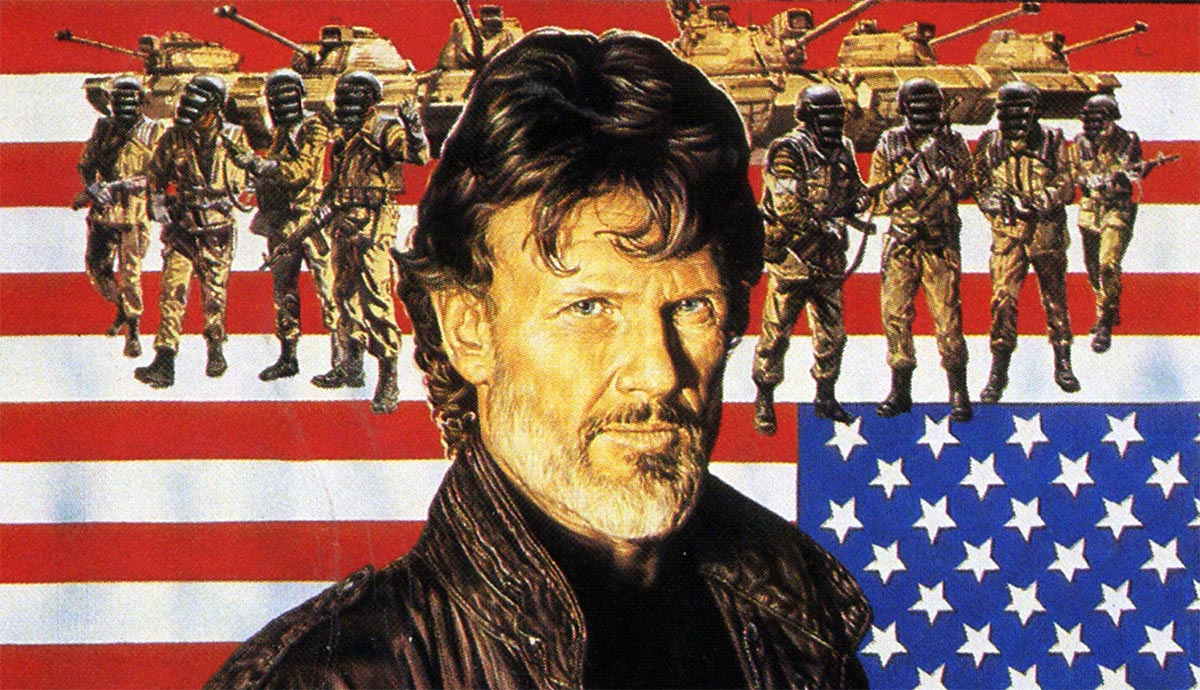 It was, at the time, the most expensive television production in history. It then went on to become perhaps the biggest TV flop of all time.

The year was 1987 and the show in question was the ten-hour miniseries Amerika.

The brainchild of veteran television producer Donald Wrye, Amerika was an ambitious attempt to create an idea of what life in the United States would be like under Soviet occupation. The drama starred Kris Kristofferson, Sam Neill, Mariel Hemingway, Robert Urich, Cindy Pickett and Armin Mueller-Stahl among many others.

Despite its star power and the full might of ABC’s advertising campaign, Amerika turned out to be a stunning disaster. Everyone hated it, from left to right. It seemed to lack even the most basic of likable elements and has since vanished into almost total obscurity.

Now, more than 30 years later, the question is ready to be asked:

Amerika takes place in what was then a future United States of the year 1997, the tenth year of a Soviet occupation. The U.S. has been unofficially abolished and divided into several administrative zones ruled by Soviet state bureaucrats with the help of Russian and East German military police. Traditional democratic freedoms have been squashed.

Disruptives, undesirables and assorted dissidents have been rounded up and put into reeducation camps. Capitalism has been replaced with a socialist economy with the usual results in the form of starvation, poverty, failed crops and general misery all around.

Former presidential candidate, Devin Milford (Kris Kristofferson), has just been released after ten years of imprisonment in the American gulag with a tacit agreement that he, in exchange for his “freedom”, is to publicly endorse the new regime and the official establishing of socialist republics to replace the administrative zones.

However, Milford, who was one of the few who initially tried to resist the occupation, refuses to tow the party line in defiance of the new order and quietly launches a non-violent, one-man resistance which soon inspires a great many more and grows in strength in opposition to the communist jackboot.

What then follows is a psychological war of attrition where Milford, whose popularity and symbolic value make him impossible to eliminate, is subjected to Soviet attempts to break him. American collaborators who see their chance to climb in the new hierarchy also try to crack Milford.

Soviet Colonel Denisov (Sam Neill) is Milford’s main adversary. He is by no means a two-dimensional, cartoonish villain, but a rather complex and not entirely unlikable character.

While loyal to the Motherland, he does have an affinity for the United States and Americans in general. He would like nothing more than for Milford to make things easy for him, but he also harbors a huge amount of respect for the ragged dissident.

In one of the best scenes in the miniseries, Milford is trotted out to a public podium in Chicago in order to proclaim his support for the occupation in front of a crowd of citizens. He refuses and instead engages in a simple yet stunning act of resistance from the stage which galvanizes the crowd. Denisov is at first shocked but lets it go on for longer than he should before finally having Milford pulled from the stage.

But by then, it’s too late. The flame has been lit.

When the miniseries first aired in 1987 (the only time it ever aired, incidentally) two things happened. Right-wing reactionaries accused it of being “defeatist” and moribund, and left-wing radicals attacked Amerika for being “jingoistic” and belligerent. What they both seemed to agree upon was that Amerika was mindbogglingly boring.

However, neither side got it right, something which may have become obvious in the years that followed if it had remained in the public consciousness through reruns, for example. As is was, Amerika was slammed by everyone, both critics and television audiences nationwide. Quicker than you can say “Kashyyykian Life Day” ABC decided to bury Amerika forever in the hopes that it would never be spoken of again.

In many ways, Amerika was ahead of its time. Yes, it was slow and ponderous compared to the superficial flash of regular American television during the Reagan ’80s, and yes, it was dour and more than a little melancholy. 1987 movie and TV fans wanted their pop-cultural showdowns with evil communists to be peppered with machinegun fire, hot lead and cold steel, flag-waving and massive Stallonian fists smashing Soviet faces.

And there’s certainly nothing wrong with that.

Amerika was something different, though. It was a thoughtful meditation on the nature of patriotism, what American values mean and the power of standing up for what’s right in the face of overwhelming odds. If you start watching Amerika thinking you’re going to be treated to some sort of Red Dawn uprising where the communist rulers are toppled at the end, you will be sorely disappointed.

There is next to no action whatsoever, a dearth of “America fuck yeah!” moments and a somewhat bleak ending.

The depiction of Soviet-occupied America pulls no punches. It’s a grey, dirty, miserable and utterly hopeless place where its citizens struggle to find a way to manage an everyday life.

There are long stretches where there is no music and very little dialogue. Apathy lies like a wet, smelly blanket over everything onscreen. Ten hours of this proved virtually impossible for American television audiences to process at the time. It is my conviction, however, that had Amerika been produced today, with the same sensibilities, by HBO for example, it would have reaped greater rewards in the form of critical and public acclaim in this age of more sophisticated television audiences.

A special mention should be made of Basil Poledouris’ cracking score for the miniseries. It’s by turns rousing, defiant, desperate, melancholy, tragic yet unmistakably American – a perfect piece of music for this story.

What makes Amerika relevant today – or perhaps makes it truly relevant for the first time ever – is the depiction of how the occupation took place. Not one shot was fired nor a single bomb dropped.

In Reagan’s America, this seemed like a preposterous notion.

In 2019 it’s chillingly too close for comfort. What toppled the United States in Wrye’s miniseries wasn’t primarily the result of foreign machinations. America collapsed from its own internal rot.

In the novelization of the series (yes, I read it) a brief mention is made of strategic atmospheric detonations of nuclear weapons in order to create EMPs over major U.S. cities. This idea seems to have been abandoned in the filmed version. The events in the miniseries which led up the occupation are much more ominous, however.

In Amerika, more and more voices were heard around the world calling for putting the United States under international supervision in order to curtail its “excesses”. Fifth columnists who collaborated with a corrupt U.N. and foreign agents managed to sow an atmosphere of self-hate which grew to a point where most Americans themselves finally welcomed the U.N.’s decision to allow the Soviet Union and its allies to occupy and “pacify” the United States in the name of “world peace”.

At one point Col. Denisov says:

“You had political freedom but you lost your passion. How could we not win?”

This is the running theme throughout the miniseries and is key to its failure over 30 years ago: that patriotism might not primarily be about taking up arms once an occupation is a reality, but to protect and defend the ideals of freedom that make democracy possible and thereby prevent occupations.

Sure, it’s not as sexy as screaming “WOLVERINES!” while attacking Red Army convoys in the Rocky Mountains, but it’s just as important – if not more so.

This very battle for the essential freedoms and values of the United States, and by extension the western world as a whole, is being fought right now. Attempts to erode the pillars of our civilization are very much underway and growing in strength. At our schools, universities and in public institutions a campaign is in full swing, a campaign to question freedom of speech and freedom of the press.

By hiding behind seemingly innocuous words like “diversity”, “intersectionality”, “exclusion”, “problematic” and “norm-criticism” the enemies of freedom toil tirelessly to implement conformity, separatism and oppression.

The very mention of ideas like common values and rallying around a shared identity, things that can truly unite diverse populations, are dismissed as “fascist”, “racist” or “islamophobic” and the people who bring it up are deplatformed and publicly shamed.

When watching Amerika in 2019, you immediately recognize the societal mechanisms in play. 1980s critics poo-pooed the idea as ludicrous, but 32 years on the dystopic portrayal of the undramatic snuffing out of freedom’s flame in the United States is proving to be disturbingly accurate.

Apart from a few people who are old enough to remember the 1987 airing (and had the stamina to get through it), there are few who are aware of it today. Amerika has faded into obscurity. There are a number of ardent fans around the world, but the miniseries has never really been properly reevaluated.

It was released briefly on VHS in some countries but never made it to laserdisc or DVD anywhere in the world. There are bootleg discs available from certain sellers and the entire miniseries can also be seen on YouTube, albeit in shitty quality.

Yes, it will try your patience and yes, it is at times frustrating, but I still maintain that Amerika does have something vastly important to say and if you are charitable enough give it a try, you will be rewarded.