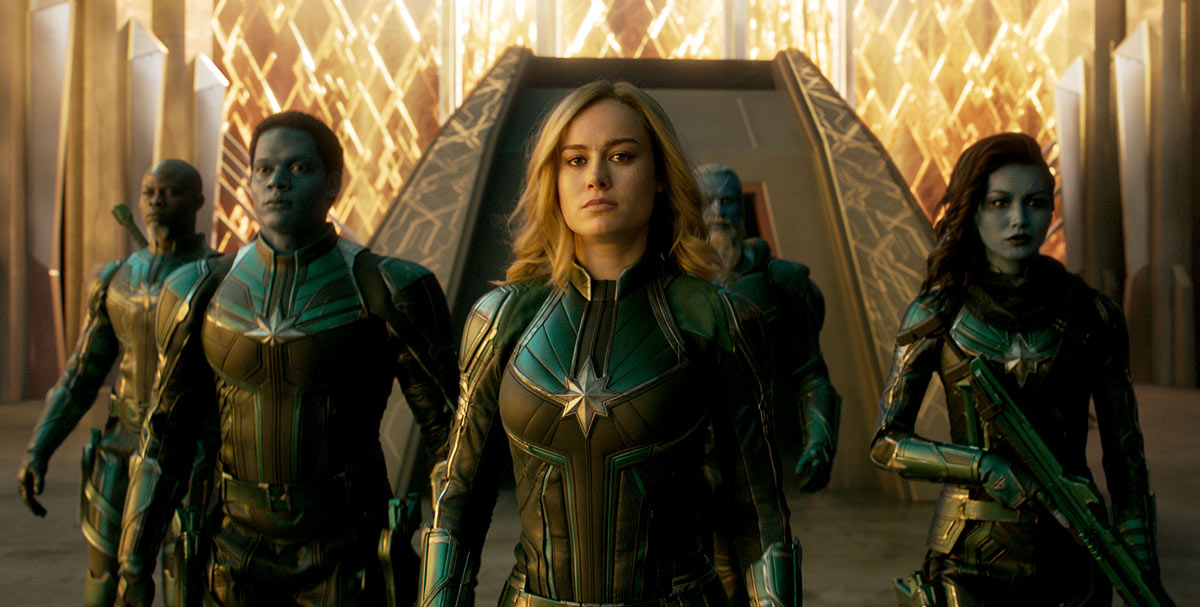 OK, Captain Marvel… it’s down to this. You and me.

“And there’s the bell! Captain Marvel comes out with a left. And another left. A couple of more lefts! An uppercut and another left! Nothing from the right!”

“AND DOWN GOES YODA!”

So the anger and scandals with movie websites and Brie Cheesy Larson running her mouth and all the other noise falls away and, in the end, we’re left with what this is all about:

And as far as adequate goes, this movie mostly is.

This is a rice cake of a movie. It’s not terrible. It’s not good. It’s… there.

I can’t help but think about Ghostbusters 2016, which is a feminist movie in comparison. That movie not only tried to force feed some feminism down your throat, it also did its best to destroy the property; it almost seemed as if whoever made it actively hated the originals.

Thankfully, Captain Marvel doesn’t seem to try to actively piss on the entire MCU. But it is a disjointed mess and Brie Larson was definitely miscast.

So before I go on, I want to be as honest as possible in this review.

I’m irritated as hell with the wokeness surrounding this movie, Brie Larson’s behavior and Rotten Tomatoes ridiculously selling out to the pressure.

But I sat through those damn credits to see two unremarkable scenes and I can say for certain that a lot more people worked on that movie than just Brie Larceny (She stole my heart, as in I’m now dead inside).

So I want to be as fair as possible to the movie for the lowly production assistant’s sake and the no less than five special effects houses that worked Captain Marvel.

The Plot & The Spoilers

I find it difficult to talk about this movie without discussing the plot so we’ll go full on. Carol Danvers, aka Vers, (DanVERS, get it?) as she is called by the Kree, is a member of a special commando unit and is about to go on her first mission. Remember that.

She has cool blast powers and amnesia. She is being told to control her emotions by her mentor and commander, Jude Law. He has a name in the movie I’m pretty sure.

She also takes time to commune with the supreme intelligence, the AI leader of the Kree. It takes the form of someone important to whoever it’s talking to.

In Ver’s case, it’s Annette Bening but she doesn’t know who she is supposed to be.

Vers is told a lot to control her emotions even though she barely shows any emotions in the entire film except for stoicism and smugness. She goes on a mission to get rid of some dastardly Skrulls and gets captured. They dig through her memories and awaken some memories. She escapes, and crash lands on Blockbuster video. I mean Earth, circa 1995.

Her escape also destroyed the Skrulls ship and they also crash landed on earth. She creates a space phone using her communicator and a pay phone? OK.

She is commanded to go after them. It will take them a day to get there to get her backup.

S.H.I.E.L.D. gets there and initially doesn’t believe her story of falling to earth amid a galactic war but after a Skrull takes a potshot at her and she photon blasts at him, Nick Fury is pretty much convinced. This leads to the subway action set piece from the trailers where she beats up a Skrull that looks like an old lady.

Fury and Vers begin investigating what the Skrulls are looking for. Meanwhile, Skrull Mendelsohn has taken the shape of the Director of S.H.I.E.L.D. What happened to the original director? No idea. They go through S.H.I.E.L.D.’s archives and finds that there was a scientist that was working on a faster than light engine. If the Skrulls find it, it could turn the tide of the war.

As she looks through the files, she finds a picture of herself boarding a jet. She realizes that she was there in 1989. She finds her friend from back in those days, and Mendelsohn follows her. He tells her the whole story.

She is Carol Danvers, a fighter pilot that was lost when piloting an experimental jet with Annette Bening. It crashed when attacked by the Kree. Bening reveals her name is actually Mar-Vel and she is trying to figure out a faster than light drive. Not sure why the jump points the universe already uses isn’t good enough but OK.

She tells her that it was designed to stop war. That’s when Jude Law appears to take the drive. She destroys it but in the process, it explodes and infuses her with all its power and some amnesia.

The Skrulls are actually nearly wiped out. They just didn’t want to be ruled by the Kree. So they get wiped out. Vers realizes it’s all been a lie.

So, she decides to change the colors on her uniform and help the Skrulls. They have to take a Quinjet up to space. As it turns out, the energy core in the ship wasn’t the thing Annette Bening was working on, it was a ship she left cloaked in orbit for the last 6 years.

She was also harboring some Skrull refugees up there, including Mendelsohn’s family.

Reunited, they can take the ship and escape to a planet outside of the Kree’s influence. The Kree arrive. I guess that was 22 hours? They fight and capture her.

Oh, I forgot about the cat. Apparently, there was a cat wandering around S.H.I.E.L.D. that actually turns out to be an alien. The Skrull didn’t bring it. The Kree didn’t bring it. It’s just there and likes Fury so don’t ask questions. It can take down bad guys when the plot demands it.

Anyhow, they hook Danvers back up to the Supreme Intelligence again where it probes her mind to find out where the rest of the Skrulls are. Or something.

Meantime, Jude Law called Ronan in to bomb Earth and because we need a big action scene, she destroys all the ships except Ronan’s because he needs to be in Guardians Of the Galaxy.

So she upgrades his pager and says to only call when it’s an emergency. Then she leaves to take down the rest of the Kree and continuing to free Skrulls.

So let’s talk about some big problems and other things.

Vers is told to control her emotions a lot but she doesn’t seem to have any. This could be OK in the beginning. But when she finds out it’s all a lie, there should have been a big emotional breakdown. There’s nothing.

She continues to be the block of wood she’s always been. It’s pointless. The audience already knows that she’s not Kree. The amnesia, the flashbacks, not to mention it isn’t exactly a secret that she’s an Earth woman means the reveal falls flat. This is the emotional core of the movie and Larson whiffs it.

It might have worked. The idea isn’t terrible but the execution is. So what you get is a big pile of “meh”. I don’t care about the reveal; I just keep waiting for it to happen. It’s not good when your audience is constantly thinking: “Get on with it.”

Yes, there is feminism in this movie. And honest to God, I could be OK with it if it was executed in a decent way.

But it had nothing to do with the character as it pertains in the story. She supposedly was told as a kid she couldn’t do things because she’s a girl; except her memory flashbacks show her constantly getting hurt.

As a dad, I found myself agreeing with the men. You’re 10 years old and you just rolled a go-cart at 20 mph. Yeah, I’d be trying to protect her too.

Even so, the Kree have plenty of women in their ranks. There was no keeping her down because she was a woman. They wanted to keep that power she sucked up from breaking loose.

None of this makes it a gender movie. It’s just shoe-horned in.

The whole political message was bullshit. My wife loves the occasional girl-power movie. She’s a normie, not tuned in and not political. She was not impressed by this movie and she’s very forgiving. That’s a big flag for me on its second-weekend performance.

The Cat Was Stupid

Everyone was talking about the cat but its inclusion makes zero sense. Where did it come from? Unexplained. What exactly is it? Unexplained. Whose side is it on? Unclear.

It’s a plot device and really not the clever.

I guess it likes Nick Fury but guess how he lost his eye? The goddamn cat scratched him. That really blows up Winter Soldier now. “The last time I trusted somebody, I lost an eye.” What a load of pigshit.

The idea of making the Skrulls the good guys was a pretty good idea. It doesn’t eliminate the idea of one of the Avengers is actually a Skrull but it also doesn’t make you worry about it in future movies. I actually liked this in the context of the MCU.

If controversy wasn’t surrounding this movie, I’d say it was a boring origin story with a lot of holes. I doubt I would’ve given the feminism in it much thought. It’s really not terrible but it’s not good. Like Thor: The Dark World forgettable.

Ten years ago, we probably would’ve liked it a lot more but the MCU has built a lot of great movies and made a lot of clever stories. Many say it feels like a step back, a Phase One movie and I agree with that, however it might have worked with a different actress. Brie doesn’t have any charisma in this movie. A different actress might’ve made it work better.