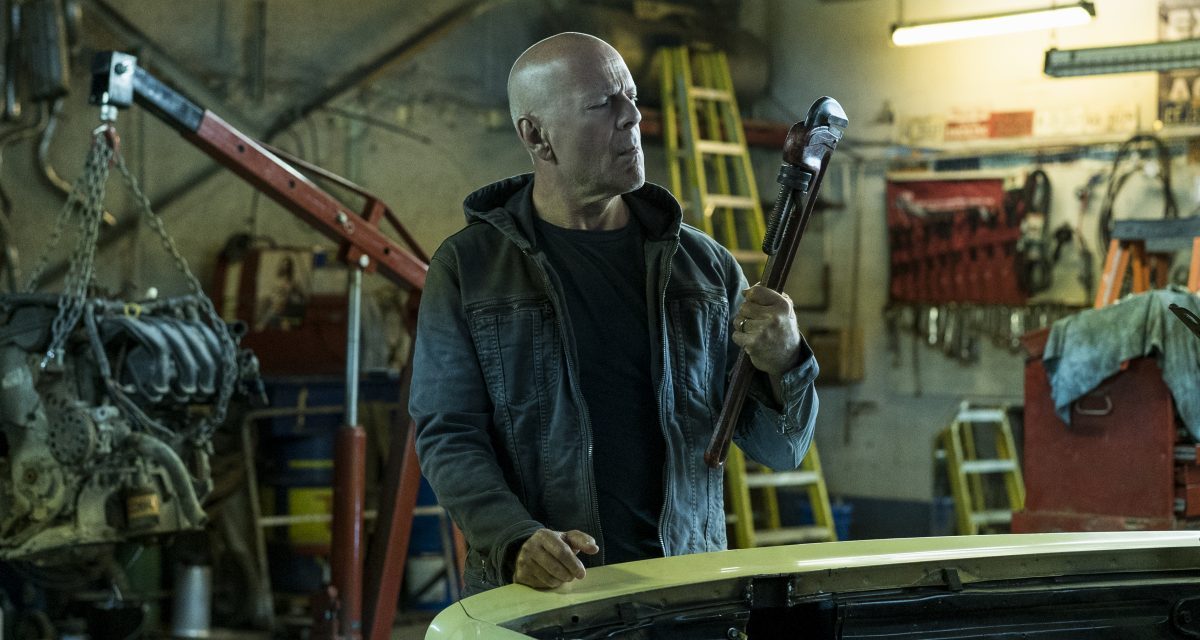 Death Wish is a remake of the 1974 pulp classic of the same name. The premise is similar but not quite as over the top in action or politics.  The original, set in New York City, explicitly showed the main character as a sheltered, bleeding-heart, liberal.

Charles Bronson’s take on the character was unaffected by violent street crime until it impacted him personally, turning him into a gun-toting power fantasy of vigilante justice.

Bruce Willis’ version is deeply aware of the violence on the mean streets of Chicago as he plays a trauma surgeon patching up bullet wounds of police officers, gang members, and the people caught in the crossfire.

While I enjoyed the original Death Wish, and the subsequent, increasingly violent sequels, I never asked for a remake and I think it’s lazy of Hollywood to continue rehashing the same ideas.

Seeing the reanimated corpse of a cheesy action movie did not have me rushing out to see this movie day one. The only thing that put me in a movie theater seat at all was the emotion that drives most of my actions: spite.

Before I had even seen the trailer to the movie I had heard Social Justice Keyboard Warriors calling it “racist”, “fascist”, and “alt-right”. A series of words that seem to mean, “This isn’t something I personally enjoy and I don’t think anyone else should be allowed to enjoy it either”.

Whatever happened to just not liking something?

Now it can’t just be bad, it has to be evil. Since I dislike high minded moral authoritarianism, I took a risk on it actually being the white supremacist recruitment video that so many sites claimed it was.

Spoiler Alert: The movie was as apolitical as a movie about gun violence possibly could be.  Death Wish didn’t take sides for political points, instead it told a personal story of mourning and revenge.

Even though I fully expected Death Wish to be a bad movie, with a good actor put up front to sell tickets, I managed to enjoy myself from beginning to end. The movie is a slow boil. I didn’t have my stopwatch on me but it felt like at least half an hour of peaceful family life before that was brutally taken away.

Death Wish Vs The Five Bs Of Enjoyable Bad Movies

If you want violence you are picking up the right movie. From bloody shootouts to a guy getting popped open like a tube of toothpaste from being run over by a dump truck, you will not be disappointed.

Bruce Willis is getting up in the years, so don’t expect him to be pulling out any Jackie Chan levels of choreography, but I found the cinema carnage to be more than adequate.

Twenty year old Camila Morrone plays teenage daughter Jordan Kersey. Cinema veteran Elisabeth Shue plays wife and mother Lucy Kersey. Both are attractive but neither of them are what I would call a “babe”. They both managed to maintain a level of wholesomeness that made the family moments almost feel like a Norman Rockwell painting.

There are plenty of baddies to go around but none of them stick around long enough to have a real impact. The three main antagonists are certainly threatening as they menace Lucy and Jordan. Only Beau Knapp, known as ‘Knox’, gets to shine as a villain. He comes off as a mustache twirling maniac at the end of the film even though he played the role of a professional burglar when he was first introduced.

The third act of Death Wish has a beautiful symphony of lots of tiny booms. Not a lot of elaborate explosions and the one car wreck was relatively tame. This was not an overproduced Michael Bay movie. The fireworks were kept to the small arms variety.

The acting was top-notch from almost everyone. There is a very awkward scene in an elevator and a problem with characters sometimes knowing things they shouldn’t. Like after hearing about forty gun shots. Jordan informs the 911 operator of her dad getting shot with the one gunshot that hits him, despite being locked in a closet.