We’ve previously taken a trip to the Land of Sequels That Shat On The Franchise, with Alien Resurrection. Now we go further into the very depths of hell itself, where the devil’s work is done. For in 1977’s Exorcist II: The Heretic, we have the gold standard.

This is the bad sequel against which all pretenders were once measured. They cowered before its fearsome reputation, until Jaws: The Revenge staked its bold and swashbuckling claim some ten years later.

It’s not so surprising that the worst sequels often follow the best movies.

After all, they have further to fall. Huge expectations hobble them from the outset. And for those movies that went beyond simply setting the box office alight and made a genuine cultural impact, the fall can be cripplingly hard.

Psycho can maybe lay claim to being the first of these psychological shocks. Here was a film that the audience didn’t shake off when they left the theater and disrupted the bathing habits of millions of terrified women — and, apparently, the lead actress.

Jaws suddenly implanted the notion in previously carefree swimmers that below them could lurk a razor-toothed beast.

But maybe no film made such a deep impact on an audience’s consciousness as William Friedkin’s The Exorcist. We all know the stories: fainting and vomiting in the aisles, people fleeing the theatres, families calling in priests to have their houses purged of spirits and a ludicrous 25-year video ban in the UK for fear of some kind of mass hysteria.

Watching the film today, it’s undeniably a well-made and entertaining movie, but its power has waned with time and parody. 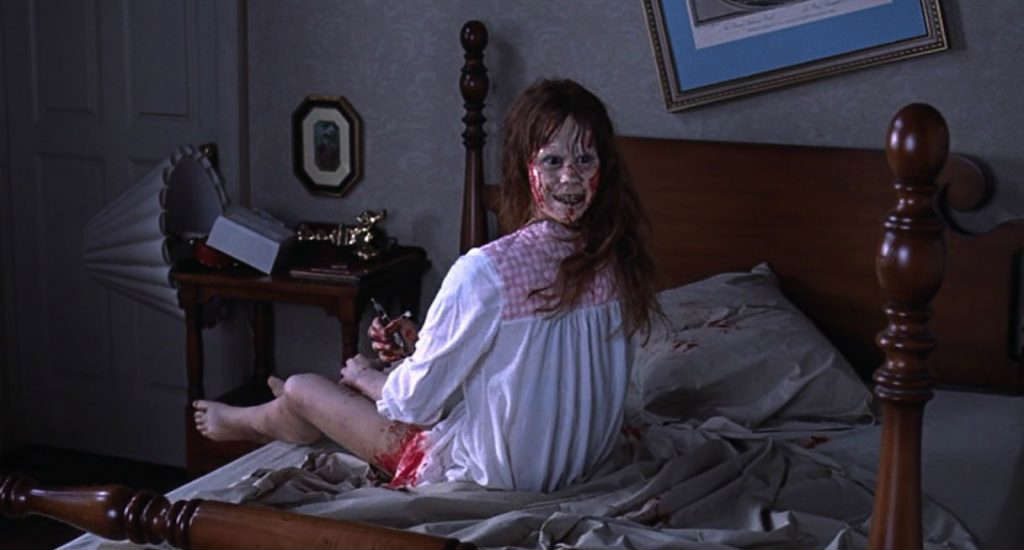 The script was tight and literate, the effects brilliantly staged, and the acting performances from Linda Blair, Ellen Burstyn and Jason Miller were note perfect, with the icing on the cake being Mercedes McCambridge’s amazing contribution as the voice of the demon.

So in 1977 the studio simply had to have a sequel. Linda Blair and Max Von Sydow were hastily signed up, as was Louise Fletcher, fresh from her Oscar-winning stint as Nurse Ratchet in One Flew Over The Cuckoo’s Nest, and Richard Burton, fresh from the nearest pub.

With Deliverance director John Boorman at the helm, what could go wrong?

Cue the premiere: the audience laugh their asses off and hurl missiles at the screen, and the critics stagger out in search of smelling salts. The reception was such that Boorman immediately pulled the film after opening night and frantically re-cut it, hoping to salvage something from the wreckage.

It didn’t help. It became one of Hollywood’s biggest and most notorious bombs and secured a place in history as one of the worst films ever made.

As I said, any sequel to a classic movie like The Exorcist was going to have its work cut out for it, and the film probably had three strikes against it before it hit the theaters.

That said though, this really is a pisser.

From the performances of the cast to the convoluted and ridiculous script, it bypasses the craftsmanship and masterful direction of the first movie, and instead zooms off into preposterous flights of lunacy.

There are moments here where you will stare open mouthed and speechless. You will see Richard Burton saying lines like “You’ve got to fight that demon that’s inside her! It’s preventing her from reaching full spiritual power!” You will hear James Earl Jones solemnly declare, “If Pazuzu comes for you I will spit a leopard”. When the credits roll, you will have considered it an insult to your ass that it was made to sit there through such nonsensical horseshit.

So, what’s it about? Well, it isn’t entirely clear that anyone involved actually knew, but here goes. Four years on from the first movie, Regan MacNeil (Linda Blair) is living in New York with her nanny and undergoing therapy at what is presumably the Institute For The Recently Possessed from Dr. Jean Tuskin (Louise Fletcher, looking thoroughly embarrassed).

Her therapy consists of both doctor and patient strapping on a headset called a “synchronizer”, staring at two spotlights and listening to a beeping noise, which allows their subconscious to synch up together in a kind of mind meld.

Confused? You will be, because this fictional machine makes absolutely no sense and the whole movie depends on it. 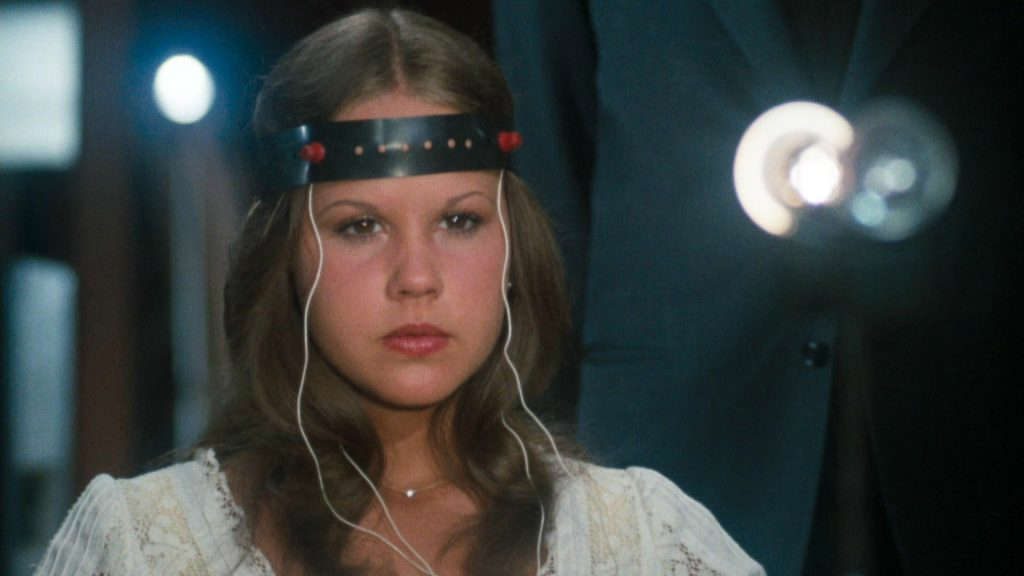 Enter Father Lamont (Burton, barely upright), who has been assigned to investigate the death of Father Merrin in the first movie. Upon meeting Regan he decides to join in one of these therapy sessions, and sees visions of Merrin’s death at the hands of the demon.

This therapy session inexplicably almost causes Dr Tuskin to have a heart attack and Lamont to start raving about the forces of evil.

“Your machine has proved scientifically that there’s an ancient demon inside her!” reasons Lamont in one of the movies’ classic lines, and so begins his quest to find out how to defeat the demon and if hell has a well-stocked bar.

It transpires that Father Merrin (Max Von Sydow, picking up a cheque for ten minutes work) had previously encountered the demon Pazuzu in the African desert when he successfully exorcised a young boy named Kokumo, whom Lamont decides he must find.

This he does by aimlessly wandering through some streets until someone asks him, “Are you looking for Kokumo?” Really.

He finds Kokumo (James Earl Jones) dressed like a tribal chief, and then in a what-the-fuck-is-happening scene suddenly finds himself talking to Kokumo in a laboratory which studies locusts.

David Lynch would have said, “I think this is kind of weird, let’s leave it out”. 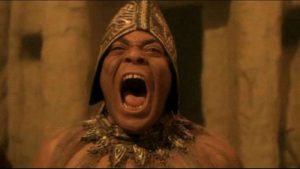 At this point, explaining the plot becomes a pointless exercise, as any attempt at maintaining a coherent narrative is abandoned for the sake of farting around with some locust swarm effects, bad science and guffclouds of metaphysical shite.

An Exorcise In Exorcism

The gist is this: there are select humans in the world who are agents of God’s will, with the psychic power of spiritual healing, who will one day unite the planet in a collective consciousness which will defeat evil once and for all. Regan and Kokumo are such people, explaining why the demon attacked them.

This idea is bad enough, but the incompetence of the execution here is stunning.

Scenes are jumbled together with little cohesion and even less dramatic effect, and as a viewer you simply don’t feel the presence of any evil as tangibly as you did in the first film, mainly because the demon isn’t actually possessing anyone, but is instead just floating around getting on everyone’s tits.

There’s fun to be had watching Richard Burton perform his role whilst clearly smashed and much has been written about his performance here. His attempts at gravitas are hilariously shambolic, like watching a barfly totter on his stool and wondering when he’ll fall off.

His inept mugging during one of the therapy sessions is a lesson in how not to act. 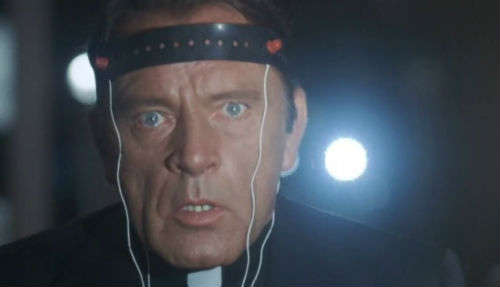 Linda Blair, so convincing in the original, is also pretty bad (although not in Burton’s league) and has to cope with the fact that the cameraman was clearly in love with her. There are obvious Lolita-esque overtones here, made explicitly clear in a distasteful scene near the movie’s climax. If Boorman was trying to make some kind of point about Regan’s awakening sexuality he really shouldn’t have bothered.

Louise Fletcher is bland and unengaging but she has the grace to look as though she knows this is a stinker and would rather be far, far away, as does Max Von Sydow. James Earl Jones appears for about five minutes in two equally baffling roles and Kitty Winn reprises her thankless character of Regan’s nanny and meets a risible end.

There are many examples of bad storytelling here but probably the best is a scene where Burton and Fletcher discover a fire in a basement. Burton begins beating wildly at the flames with, of all things, a crutch, before Fletcher has the sense to grab a fire extinguisher from the wall.

Another is the film’s entire climax, which takes us back to the MacNeil house in Georgetown and a confusing mish-mash of random special effects and a resolution so mishandled you’ll wonder if the scriptwriters were deliberately having a laugh. It really is that bad – a genuine case of “you have to see it to believe it”. 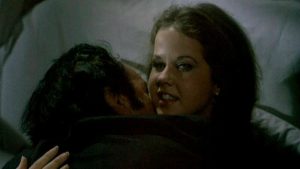 Exorcist II’s status as one of Hollywood’s mightiest turkeys means that it’s actually worth watching. The movie is a gripping experience – just not in the way it was intended. But don’t be expecting a movie of any artistic merit, despite a few scenes featuring some imaginative cinematography and effects.

The accepted wisdom is that the hugely underrated Exorcist III, directed by author William Peter Blatty in 1990 from his own follow-up novel, is the real Exorcist sequel.

It’s a superior psychological chiller with some shockingly effective scares. Seek it out if you can, and you’ll be needing your brown trousers for at least one scene – to my mind, the best jump scare ever.

Exorcist III was well-received and has grown in acclaim over the years, while a bargepole is required for 2004’s Exorcist: The Beginning, another satanic shambles lacking even comedy value. But if you have a taste for the finest turkey, pop in Exorcist II and prepare to feast.