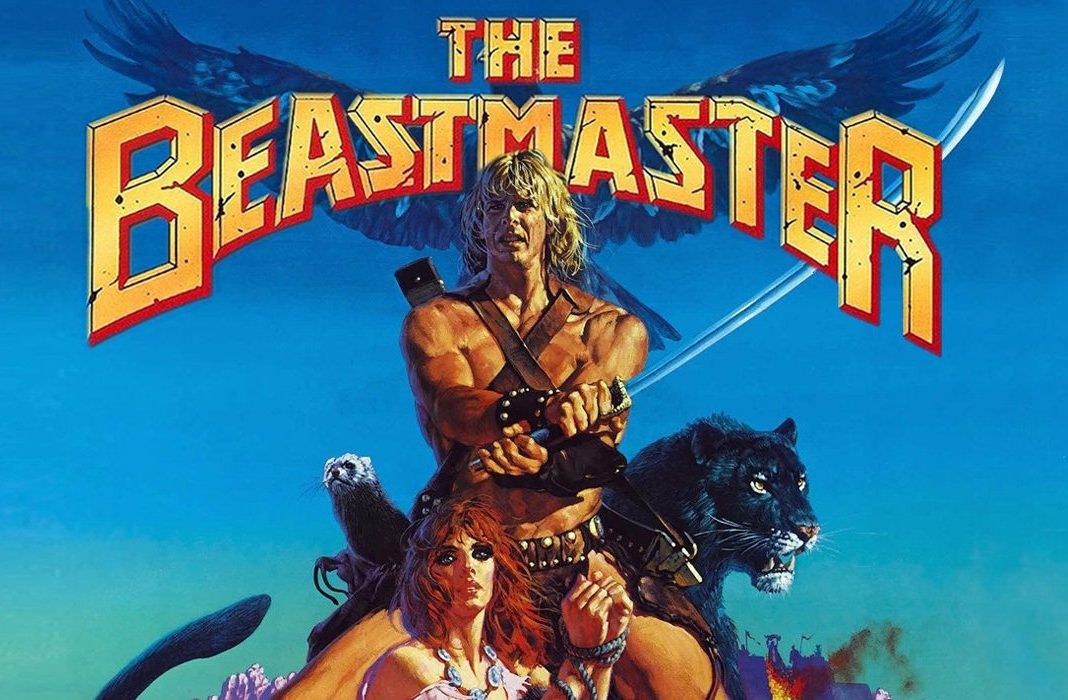 “Sshhh… The beast is fierce!”

A Gem Among Diamonds

1982 is widely regarded as one of the greatest (I say the greatest) years for awesome cinema. Movies like E.T., Conan the Barbarian, Star Trek II: The Wrath of Khan, The Dark Crystal, Poltergeist, First Blood, Creepshow, Rocky III, Blade Runner and The Thing were among the ridiculously rich crop of films which seared our eyes, fried our minds and galvanized our spirits on the big screen that year.

For those of us old enough to have been part of it way back then, that amazing year doubtlessly played a huge part in turning us into who we are today.

However, 1982 wasn’t only a bumper year for big budget and class A movies, it was also a massive year for B movies and second-tier flicks, with the likes of Xtro, Basket Case, Class of 1984, I the Jury, Death Wish II, Megaforce, Swamp Thing and many others being unleashed upon the world.

Some of them were good, some truly awful, but none of them were anything less than memorable. One of those B movies stands head and shoulders above the rest, a film which not only stood out back then as being something special but has endured the test of time and is now considered a classic of the genre — namely Don Coscarelli’s sword & sorcery epic, The Beastmaster. 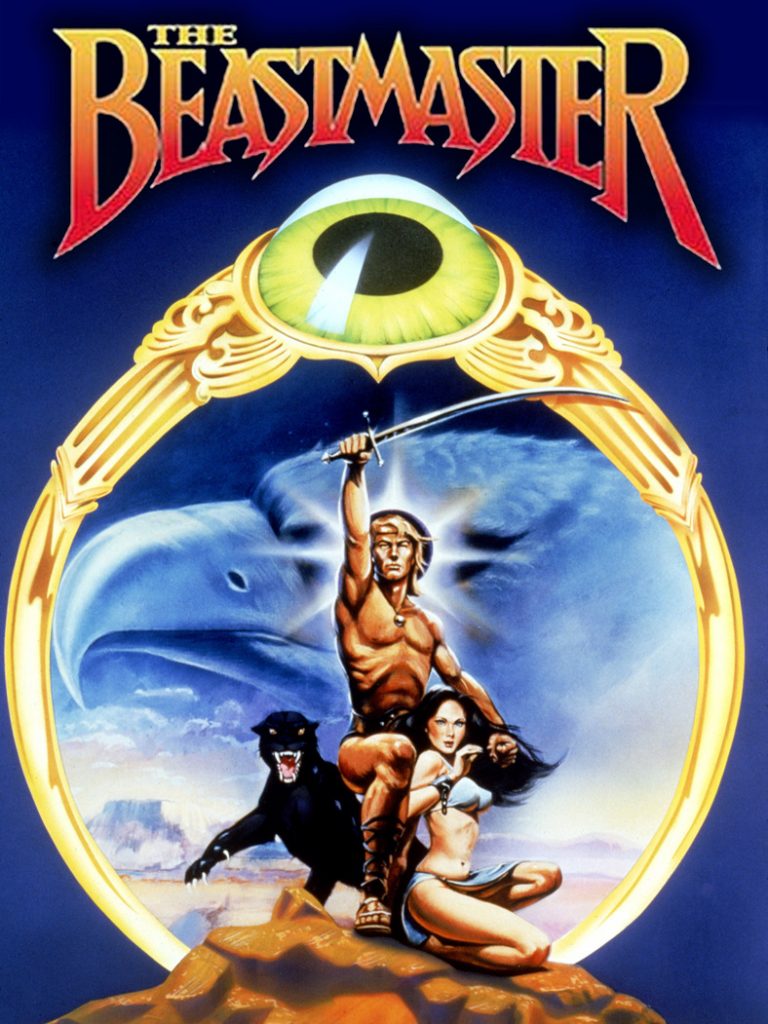 One of the few flicks that eluded me at the time, I never caught it on the big screen and didn’t get around to seeing it on VHS until 1984. We didn’t have HBO while I was growing up but I was well acquainted with the running joke that HBO stood for “Hey, Beastmaster’s On”, a jibe fondly leveled at the film for being run so often on that channel.

As I said, we didn’t have HBO, but I probably watched it on videotape more often than it was shown on TV. It was love at first sight — a love which has grown over the decades, especially in this age of neutered and spineless Hollywood genre cinema.

The Beastmaster is based on Andre Norton’s novel of the same name, with the name being the only thing they have in common after Norton, aghast at the changes to her novel, requested having her name removed. It was director Don Coscarelli’s first feature film after the legendary cult horror classic, Phantasm (1979).

On the off chance that a reader or two has never heard of The Beastmaster, I’ll give a quick rundown of the plot:

King Zed of Aruk is awaiting the birth of his son. Maax, an evil cultist priest, has been told by his witch seers that the unborn son of King Zed will one day bring about his downfall and that of his cult.

On the orders of Maax, the witches wrench the living infant from its dying mother’s womb (under the horrified and helplessly entranced gaze of Zed) and place him inside a cow for unnatural birth before he is to be sacrificed, thus thwarting the prophecy.

But before one of the witches can plunge her dagger into the baby boy, she is killed by a kind peasant shepherd who happens upon the macabre scene, and who then adopts the baby as his own. The boy grows up under the name of Dar in the peasant village of Emur, learning both how to fight and to toil the land from his adoptive father.

Early on, Dar discovers that he has the power to communicate with animals and get them to do his bidding, a gift which he and his father keep secret from the rest of the village.

One day, Emur is attacked by a fearsome masked chieftain — Maax at his side — leading the dreaded Junn horde which kills virtually everyone and burns the village to the ground.

Dar, who is knocked unconscious early on, is the only survivor.

With an eagle who acts as his eyes in the sky at his side, Dar ditches his burlap peasant outfit and dons the loincloth and weaponry of a badass fighter, leaving his ruined village and setting out for the valley of Aruk, where his adoptive father said he must one day seek his destiny.

Along the way, Dar befriends a black tiger and two ferrets, Kodo and Podo, who accompany him on his quest and towards a final, fateful confrontation with Maax and his evil cult.

So Far, So Cheese, Right?

Well, yes, to a certain extent.

What sets The Beastmaster apart from similar fare, however, is its refusal to be categorized as just another cheap-ass, cardboard fantasy schlockfest.

Don Coscarelli, producer Paul Pepperman and the rest of the cast and crew simply said “fuck it” and decided to go epic, despite budget constraints and the snootiness afforded the genre at the time.

Production was full of strife, not least of all between Coscarelli and exec producer Sylvio Tabet, over everything from casting to editing. All things considered, The Beastmaster is a minor miracle. Although it had nowhere near the budget of, say, Conan the Barbarian, every penny of its 9 million are evident on the screen, and often it seems like a lot more.

From the earnestness of the (sometimes wooden) acting, the gorgeous Californian locations and the beautiful cinematography by John Alcott, to the impressive sets and Lee Holdridge’s thunderously rousing score, The Beastmaster is constantly punching way above its weight class.

The Crew Believed In It, Don Insisted On It

Above all, the secret to The Beastmaster’s strength and enduring charm is its purity of intent. There’s not a trace to be seen of the irony or postmodern bullshit which poisons so much of pop culture today.

Dialogue that would otherwise have been cringe-inducing or laughable is accepted without question; no mean feat and only possible when everyone behind the movie believes in it.

The film is all heart, driven by the willpower and vision of the people behind it, determined to make the best movie they possibly could, despite the odds.

Won’t Someone Think Of The Children?

Although there are family-friendly aspects of the film — the comedy relief ferrets, the romance, the adventure — there is also some pretty intense stuff in The Beastmaster, stuff that would never get away with a PG rating today like it did back in 1982.

We’re talking forced partial-birth abortion, the burning alive of children, horrific creatures that look like a cross between bats and venus flytraps digesting their victims alive leaving only a tangled pile of wet bones. Add in a terrifying chase through tunnels where our heroes are trying to outrun ‘roided up Rob Halford gimps driven mad by torture and some weird zombie potion which makes their eyes glow green, not to mention Tanya Roberts nudity — you know, FOR KIDS!

Aaahh, the good old days, before political correctness killed movies like this and sapped our will to live.

The Kapa Is The Weapon Of A Beastmaster

Aside from his beastly companions, Dar is armed with a “kapa”, a sort of analog, non-magical version of Prince Colwyn’s glaive in Krull and an incredible, sleek-looking sword.

In a Starlog interview back in the 1980s, Marc Singer described the sword as being “heavy and sharp enough to cut a Sherman tank in half.”

Singer himself is obviously fit enough to wield it in the film, looking every bit the sword & sorcery warrior — ripped, but not bulky and semi-immobile like most bodybuilders trying to look barbaric on screen during that decade.

His performance is likable if nothing extraordinary, but as I stated earlier, the earnestness with which everything is presented sells it. To the hilt.

Some Familiar Faces, One Unforgettable…

Singer’s co-stars are a mixed bag, but all contribute to making The Beastmaster what it is. John Amos is on hand as Seth, King Zed’s exiled head of security who is now trying to protect the king’s second son (and Dar’s half-brother), Tal.

It even features that fat dude who plays the novelty salesman and dad to the obnoxious kid who gets his face eaten off by spiders and snakes in Halloween III.

Beastmaster Through The Ages

The film received a belated sequel in 1991’s Beastmaster II: Through the Portal of Time, in which Dar is transported to 1990s Los Angeles in pursuit of baddies Wings Hauser and Sarah Douglas. No, it’s not as fun as it sounds.

In fact, it’s dreadful in every regard, including the ghastly bleach-blond, Dee Snider fright wig they stuck on Marc Singer’s noggin for the film. A third (and rather lame) film, Beastmaster III: The Eye of Braxus, was released DTV in 1996, followed three years later by a TV series which lasted for three seasons.

Back in the late 1990s, I read an interview with Coscarelli (perhaps in Fangoria) where he mentioned that a colleague of his still had in his possession extra footage and outtakes of Tanya Roberts noo-diddy, which he jokingly said he should stick on a Beastmaster DVD as one of the extras.

When Anchor Bay finally released the first Beastmaster DVD in 2001, wouldn’t you know it — the sterling gent was true to his word and included the footage as an easter egg on the disc. What a guy!

The only Blu-ray release I know of is the Australian Umbrella edition, well worth getting for the image quality and sound, even if the Anchor Bay DVD still looks pretty good. I hate streaming so I don’t know how available the film is in that format, but I do recommend getting it on disc if you’ve never seen it before.

Hell, get it on disc just because it’s awesome and deserves to be a permanent part of any decent movie collection – no matter how many times you’ve seen it before.