I know this will sound like the worst sort of supercilious, hipster bullshit but this also happens to have the benefit of being 100% true:

My mother, like P.L. Travers before her, detested the way Walt Disney watered-down — Hell, who am I kidding? — flat out removed any grit and deeper meaning of true classics that he and his company adapted into animated features.

I didn’t see a single Disney animated feature in the theaters until Beauty and The Beast and that wasn’t until I was about to graduate college. And I thought it was as thin and gutless as any adaptation Disney produced previously.

Of course, I’d seen some movies on video. I once asked out a squeaky-clean church girl who, on our supposed first date, pulled the rug out from under me and invited me into her apartment for a “video party.” Her best friends were there too. And the VHS line up was Disney’s Sleeping Beauty and Robin Hood.

“Good wholesome fun! You don’t mind, do you, Anon?”

They were singing along and saying dialogue in unison with the characters.

I admit that perhaps this little ruse informed my mistrust, and yes, a fair amount of teeth-grinding anger at the idea of the whole Disney experience, but that is not the root cause.

A post-graduation trip to Disneyland and getting ass-raped for $3.00 waters in the 100-degree Anaheim heat fortified that outlook.

Over the years, I’ve seen some home runs in the theater, chiefly The Incredibles and Toy Story, but for the most part, Disney films aren’t something I look forward to, Pixar or not.

I saw the first Frozen, I believe, in a bargain double feature with The Lego Movie.

I took the kids and promptly forgot all about it. Except, how could anyone possibly forget the classic earworm, “Let It Go?”

Anyway, with the need to win my daughter’s love and approval and with the long Thanksgiving break, what’re you gonna do?

Perhaps you were fortunate to avoid it in the theaters but it hits the home media market on February 25th and the cry for consumption will be loud and long.

Consider this a warning from history. 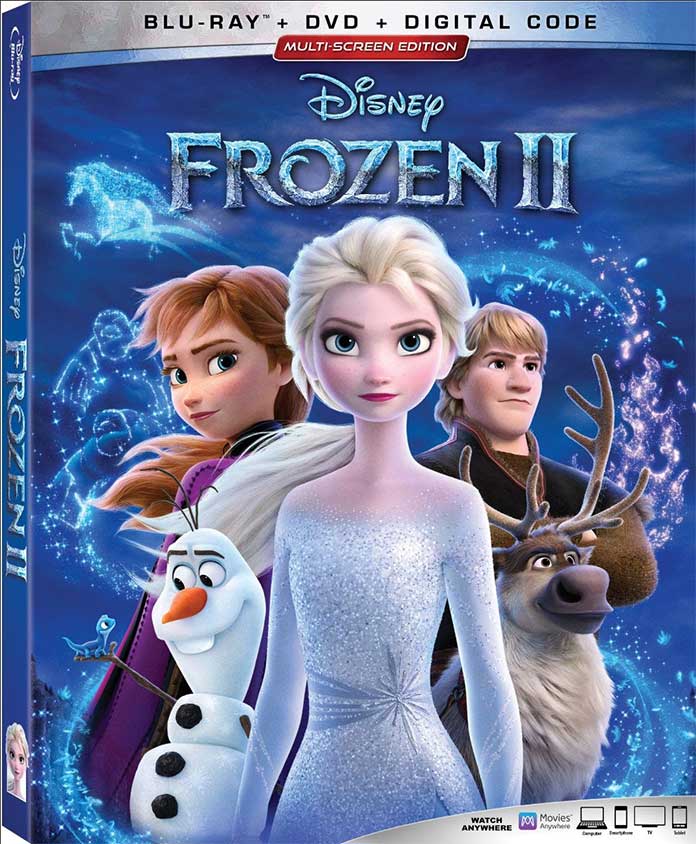 Firstly, I have to retroactively scoff at Disney playing the Danish/Norwegian Culture angle with two generic, slight of build, blandly pretty lead characters, indistinguishable from the Rapunzel model in Tangled.

Apparently there are Disney cultists out there who try to rationalize their favorite corporation’s head office laziness by connecting the three characters as if they’re part of a shared universe.

I just think it’s funny that Disney didn’t even bother to use, say, Liv Ullmann or Connie Nielsen as their templates.

I should add that there’s some mild lesbian subtext this time around. But I think that was cleverly teased for marketing purposes more than anything.

And, of course, to keep that pervy Frozen DeviantArt trending.

In truth, there must be countless underrepresented Scandinavian females who cannot live up to the impossible expectations set forth by characters like Elsa and Anna.

I personally would’ve made Anna overweight this time around. Just as big as a house, totally changed her character design.

She would ask her boyfriend Kristoff if he still loves her now that she’s put on so much weight and he professes that he does!

He’d love her at any size.

That’d be a victory for two more important demographics: “Chubby Plain-Janes” and beta-males.

While Kristoff is pretty much the poster child for beta-males, they just could’ve dug so much deeper.

However, this is not why I’m putting pen to paper.

I’m no historian, but even I could tell you that a goodly amount of European Nations, including the Scandinavian ones, plied in the slave trade. And in 1830 or whenever Frozen is supposed to take place, slavery was fresh in the nation’s consciousness.

A quick Google search reveals that Norway abolished slavery in 1803.

So here we have black Lt. Matthias voiced by Sterling K. Brown and he’s fairly old — at least 40 to 50 — AND he’s described as the King’s right-hand soldier. 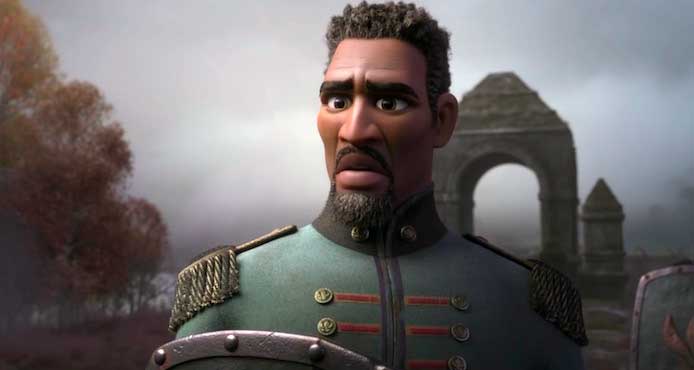 So how did that happen? Is he a former slave?

Aren’t we entitled to that explanation?

Shouldn’t there be at least a quick line of backstory where we find out he was indeed a former slave who saved the King’s life?

And because the King was so grateful and open-minded, he made Matthias his First Lieutenant.

Mind you, this would be the same open-minded King who, according to the plot, tried to screw the Northundra tribe — which is supposed to be a substitute for the indigenous Norwegian Samí people (Again, my compliments, Mr. Google) — with his damn building plans?

What was Disney’s agenda here?

Does Norway get a free pass on its evil white colonial past or not?

Without an explanation, isn’t it just as confusing and offensive to include the character as to not?

Obviously Disney will say Lt. Matthias is in the movie because they were being color-blind in their character line up.

A step forward for black children all over the world! Not to mention merchandisers.

But it makes no sense. He would likely only be living in cold-ass Norway by force or he’s an adventurer/mercenary or something of that nature.

But he sure as hell didn’t grow up in Norway! Not willingly.

And in the end of the movie Matthias rekindles a romance with the woman of his dreams, also black, and they’re putting this forward like it’s nothing but logical.

“They grew up together in safe, free-thinking 1800s Norway!”

Is it color-blindness or just plain ignorant insensitivity?

You wouldn’t know anything about that, would you? With your eugenics funding and World Population Council?

Yeah, yeah. I know. Cheap shot. The people running Disney today have already apologized for their founder’s errors. And made quite a show of it.

But still, what are they teaching our kids with these damnable Disney cartoons?!?!

Collectively, we are teaching our kids to be self-righteous know-nothings.

And in the end, they’re still relegating black culture in the world to a secondary role.

If you want the black experience in 1830, from the perspective of any number of countries at the time, then fucking tell it!

I will concede Moana, where it was all Pacific Islanders, telling a Pacific Islander myth and it was a pretty spiffy little film. (Saw it on Netflix. I’m not a hypocrite!)

Now just imagine if instead of Moana’s grandmother’s spirit spurring her to greatness, it was the ghost of white Dr. Winston, a missionary who lived on their island.

That’s the level of thinking in Frozen. Lt. Matthias is conveniently placed like a tchotchke.

“But it’s just a silly kid’s movie,” you say, and not to be taken seriously.

Then why are you throwing overt context at us about raping nature and exploiting the indigenous people?

Just not that socially conscious to actually know anything about history.

I know, gentle reader, I can still hear you:

“It’s a fantasy! It’s not literally Norway or Denmark or any real Scandinavian country!”

Okay, fine. Then taking that line of thinking to the next level, can we expect Uberman!, a Disney animated musical spectacular centered around one SS Captain Deter Schultz, an idealistic young Germanic dreamer in 1933 from the fictional city of Bavariopolis who trusts his life to both his wacky imperial eagle Holger and his best friend, the wise-cracking Jewish Sargent Ruben Hirschowitz?

At what point does cultural sensitivity and inclusion become so distorted and warped that it comes full circle and reverts back to Uncle Remus levels of bad taste?

I say that point is upon us. Frozen II, and much of the animated tripe, is ground zero.

Don’t get me started on the How To Train Your Dragon series, which can’t even tell a Viking from a Highlander.

And I don’t believe Disney ever has good intentions.

They needed to include the black population in their Frozen merchandising.

And before you get on your soapbox, jumping up and down about my hateful outlook, let me offer this: early in my career I worked on a kid’s animated TV show where I was a production schlub and I had to make many a photocopy.

One of the photocopies was of a studio memo about the color of a black character’s skin. And the studio boneheads were asking to lighten it so the character would appear more “relatable to white audiences.”

I wish I’d kept it as proof.

Granted, this was the early 2000s right after 9/11. But I don’t believe Hollywood has changed all that much.

They beat their chests.

They write think-pieces about their racist pasts.

They will patronize by nominating B-movie theme park rides like Black Panther (Fuck yeah, Scorsese!) for Best Picture, or Dev Patel for Best Supporting Actor for Lion when he was clearly the main character, but basically they’re up to the same old Walter E. Disney-style, money-at-all-costs bullshit.

But, How The Movie?

How do you think it is?

The songs are like any other anticipated follow up album, like say, Michael Jackson’s Bad, fine on their own, but more of the same and not as inspired as the predecessor.

It’s not a beat-for-beat rehash like The Incredibles 2 but it’s so hamstrung by its need to be all-in-one, a corporate merchandising bonanza and a culturally sensitive touchstone that it’s just an unsatisfying mishmash of half-completed ideas.

A good chunk of the plot threads aren’t even resolved fully.

Starting with what ultimately happened to Anna and Elsa’s parents. I’m sure that point is just waiting in the wings for a sequel.

So help me, I just contributed to a sequel.

Sorry, Mom. I failed you.

Meanwhile, there’s evil, megalomaniacal Uncle Walt, sleeping soundly in his cryotube in that secret location, smiling victoriously to himself.