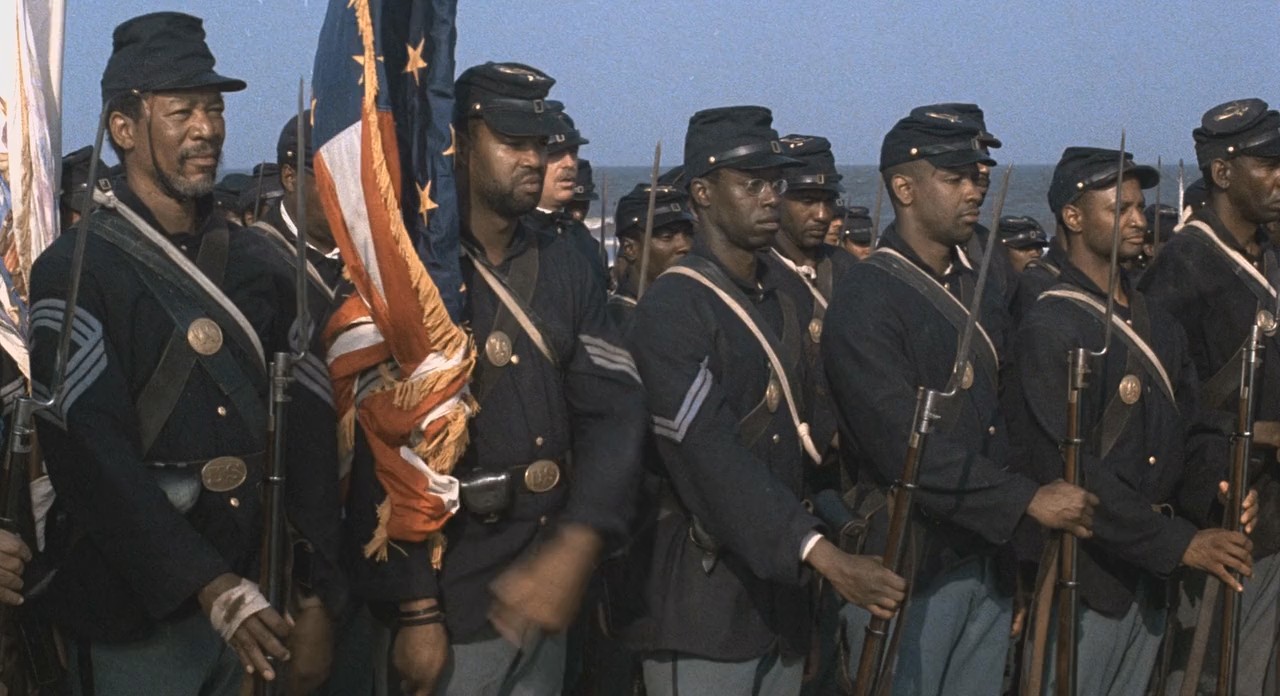 Let’s dispense with the pleasantries: I know that Glory has been slapped with the “White Savior” label. I don’t think that’s fair or accurate but, really, whatever.

There’s no denying the simple fact of history that white men were in leadership positions at the time of the movie’s setting and these men offered the opportunity for armed service to black men. Deal with it.

If black men had chosen among themselves to openly bear arms, even if they were in support of the Union, the story might have had taken a vastly different course, for even among the fighting men of the Union Army, racism was alive and well.

Do you feel I’m off base? Completely wrong? Let’s get into it in the comments section below.

I’m not going to examine this movie from a historically accurate point of view. The history is out there for you to read if you choose for the purpose of comparing and contrasting.

I’m looking at this movie from a purely inspirational place.

Everyone these days seems to be searching for representation or something to lift their spirits. Black Panther is monetarily out-performing its own worthiness as a piece of entertainment because it’s been hyped to the sky and back as some kind of cinematic social savior. It’s a good movie, but seriously, come on now.

“STOP WASTIN’ YOUR MONEY ON MARKETING SCHEMES,
AND PRETTY PACKAGES PUSHIN’ DREAMS TO THE BEAMS.”

The acting, the visuals, the dialogue, the score, the basic message of Glory…it all adds up to a clear-cut, truly up-lifting call to arms.

This is not a call to violence. Not a call to start barking at white people when they speak. Not a social justice signal of representation.

In my opinion, it’s simply about courage. A basic necessary human trait, not race-related.

This scene exemplifies the entirety of the message (caution: language NSFW and NSFSJW).

It’s about having the courage to see yourself for who you are and make the change in your own heart that will enable you to face adversity when the opportunity presents itself.

Adversity is going to come. When it does, how will you face it? Will you cry foul and try to change the rules to suit your own weak heart, or will you strengthen your spine and stand against it?

So many people these days are going the exact opposite direction of this simple truth. Folks these days are making their lives so much more complicated than they need to be. They’re pulling their own hearts in a thousand different directions and then crying out for each of these directions to be represented.

Where’s the cinematic utopia in that? When Disney’s Star Wars reboot features Luke Skywalker as a trans-gender Filipino youth, yearning for a way out of the oppressive patriarchy of Uncle Owen’s (molestation) farm and Darth Vader is played by a CGI Clint Eastwood?

I say that, but at the same time I can’t deny that it was fun seeing so much of my own culture on screen in Disney/Pixar’s Coco.

But that’s where it stops for me. It’s just fun. I’m more interested in what the characters and story demonstrate about human truths.

Motherfuck representation. If Coco had been about a family in China, the message would have still resonated with me. I also don’t need it to be a signal for an uprising and call for more movies about Mexico and Mexican culture, even if Gina Rodriguez does.

The plot of Glory concerns the formation, training, and fate of the 54th Regiment Massachusetts Infantry.

The cast is stellar. Denzel Washington gives what many consider to be one of his finest performances. Morgan Freeman, as seen above, is the core of the cast. Andre Braugher, Cary Elwes, and Jihmi Kennedy are all excellent.

At debate among some was Matthew Broderick. Critics could not seem to see past his boyish demeanor nor the roles he was famous for such as WarGames and Ferris Bueller’s Day Off.

I’ve never had an issue with Broderick’s performance in the movie. His boyishness works to his advantage and comes across to add character depth without dialogue.

The score by the late James Horner is absolutey brilliant. It’s uplifting in and of itself.

Firmly In The Black

As mentioned earlier, Black Panther is doing very well at the box office. According to Box Office Mojo, it’s currently the second-highest grossing movie in the Marvel Cinematic Universe, right behind The Avengers and still counting.

By comparison, Glory could be considered a box office flop.

I myself did not see it during its theatrical run. I did not discover the movie until I saw it on VHS during the summer of 1992. No exaggeration, thereafter I watched it every day for a month straight.

Red Letter Media (RLM) touched on this same issue in their review of Annihilation. So many women are clamoring for increased roles of cast and crew for females, yet no one is talking about Annihilation, which RLM considers to be smart, well-made, and a check-box ticker.

If you’ve never seen Glory, I urge you to watch it as soon as you can. It may not get you woke but it will wake you up.

Forget about being woke. Everyone faces an uphill battle. Your problems are nothing new.