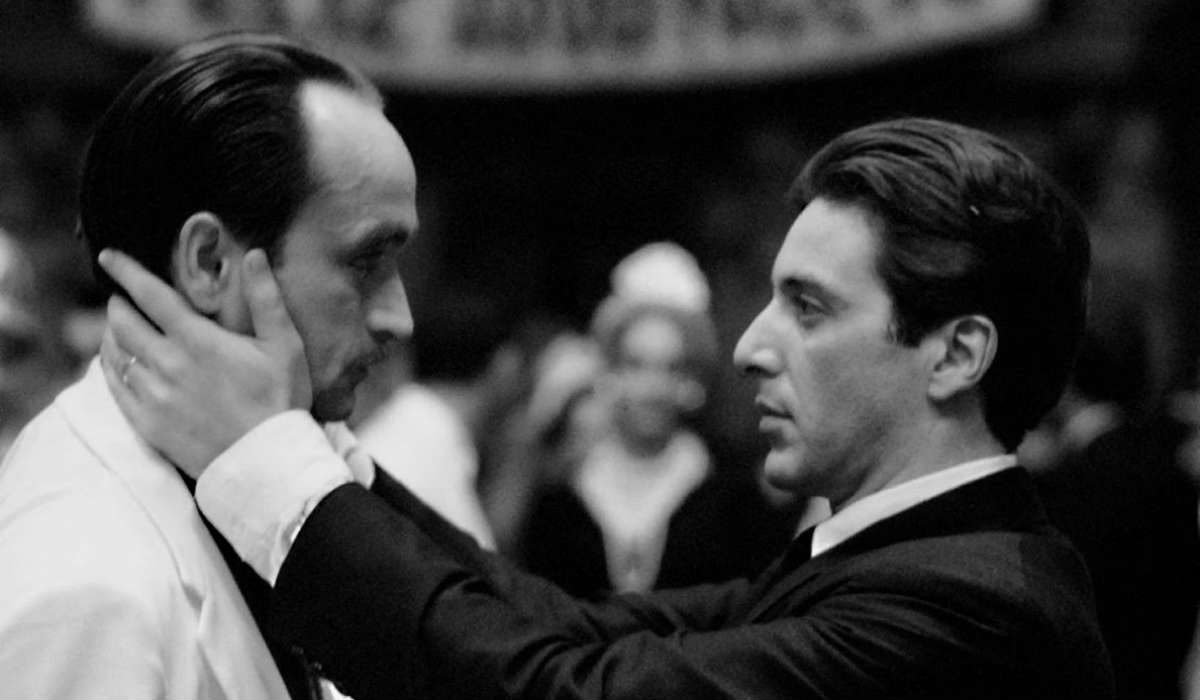 This is for the young people out there. Our readers and visitors that aren’t like me: near 40, graying hair, and Mexican.

This is also for our readers and visitors that haven’t seen every classic movie ever made. Hell, I’ve managed to miss a bunch myself.

I bring good news to all: The Godfather trilogy is available now on Netflix. And there was much rejoicing.

I guess I was around 14 or 15 years old when my mom rented six video cassettes from Blockbuster and told me to sit down and watch. You see, friend, in the days before DVD and Blu-ray discs, lengthy movies were published on two separate VHS tapes. You had to get up off your ass and pop in the next tape to continue the story.

So, I popped in The Godfather, tape 1, and my movie life was never the same.

This is the template for Mafia movies, in my opinion. Sure, there are other classics out there, like Goodfellas and Donnie Brasco, but for style and mood at a level beyond great, it’s difficult to top this movie.

Francis Ford Coppola is as good at framing a shot and filling it with a beautiful image as Martin Scorsese. I think Scorsese is the better director overall but Coppola is damn good. His sense of pace and timing is incredible and maybe he even knew in his heart that he was creating an enduring classic because the opening scene is immediately gripping.

From the use of shadows and light to the blocking of the actors and the timing of the edit, all accompanied by that haunting music and dialogue, the moments just before we first glimpse the face of Don Corleone (Marlon Brando) are almost scary. Who is this man, that other men should cower and stammer before him, yet still approach him as a trusted friend?

We come to learn that Don Corleone is a rich man in more ways than one. He’s got money, sure, but his real treasure is clearly his family. The story opens on his daughter’s wedding day and we are immediately privy to the dual nature of his life: Mafia leader and devoted husband. Demon-for-hire and loving father.

Corleone’s third child, Michael (Al Pacino), has returned from combat in WWII as a decorated US Marine, and assures his lovely young girlfriend Kay (Diane Keaton) that he will never be part of his family’s business.

Fate and drug dealers have other plans.

The story is epic. It’s exhilarating and tragic. Moving and frightening. Coppola’s deliberate style and the brilliance of the actors combine to create, again, the template by which other Mafia movies can be drawn.

Standout performances from Brando and Pacino are balanced by subdued genius from Robert Duvall and Diane Keaton. James Caan’s portrayal of Sonny Corleone is pretty much the mold for Mafia tough guys.

Because the true villain isn’t revealed until the final act of the movie, it’s difficult to name a standout performance there. Yet, as we discover, in this movie and across the entire saga, the Corleone family is at war with the very lifestyle they’ve chosen.

This is how you make a prequel. And a sequel. Within the same movie!

Take everything that was brilliant about the first movie and turn it up to 11. While Brando doesn’t feature in this movie at all, the character of Vito Corleone is portrayed by a then rising star who is now considered among the greatest actors of all time.

The saga continues as the Corleone family tries to shed its past and strives for a future that doesn’t require bullets and guys named Rocco to maintain. As before, the lines between business and personal decisions become blurred and it’s a race against time and loyalty just to survive.

If you’re an Al Pacino fan like me, you know his trademark acting quirks. The random noises before delivering a line, the head tilt, and of course the Pacino Blast…they’re all on display here. If you pay close attention in the first movie you’ll notice a couple of these quirks in their infancy but here they are on full display. It’s fun to watch an actor discover their style.

We also see the beginnings of Diane Keaton’s dorky act. She is again perfect here and becomes just as devious and murderous as any of the best Corleone men as the story unfolds.

Coppola’s style is again on perfect display and is actually elevated by the prequel story line. His use of shadows and light to tell this story is absolutely brilliant.

As with the first movie, the more the Corleone family tries to claw its way out of the mire, the deeper it sinks. Such a tragic ending.

After the sheer brilliance of the first two movies, what could we realistically expect to see from a third installment?

I am of the opinion that Part III is good. It’s not as good as their first two, because what could be? Yet it still has its own place in the saga and relies on a wild story to drive it.

The saga concludes as the Corleone family learns that no one on this earth, no not even one, is above reproach. Those people displaying a holier-than-thou attitude are ripe for the plucking. And plucked they are.

Some interesting choices were made for this movie. Apparently Winona Ryder was supposed to play Mary Corleone, daughter of Michael. The role instead went to Sofia Coppola, daughter of Francis Ford.

Why did they leave Duvall out? That’s just plain dumb.

While this installment in the saga isn’t as revered as the previous movies, nothing about the style nor the acting is lacking. Coppola again brings the heat and his actors match him step for step. It’s a damn fine movie in its own right.

So What Do You Make Of This?

Do yourself a favor. If you’ve never seen this complete saga, watch it immediately. It’s never been easier to do so.

Fix yourself a big batch of spaghetti and maybe buy some wine and settle in. If you have to leave the room, pause the movie. Don’t let it play while you take a piss or get a snack. Each scene of these three movies is to be awed at.

I genuinely hope that you enjoy.