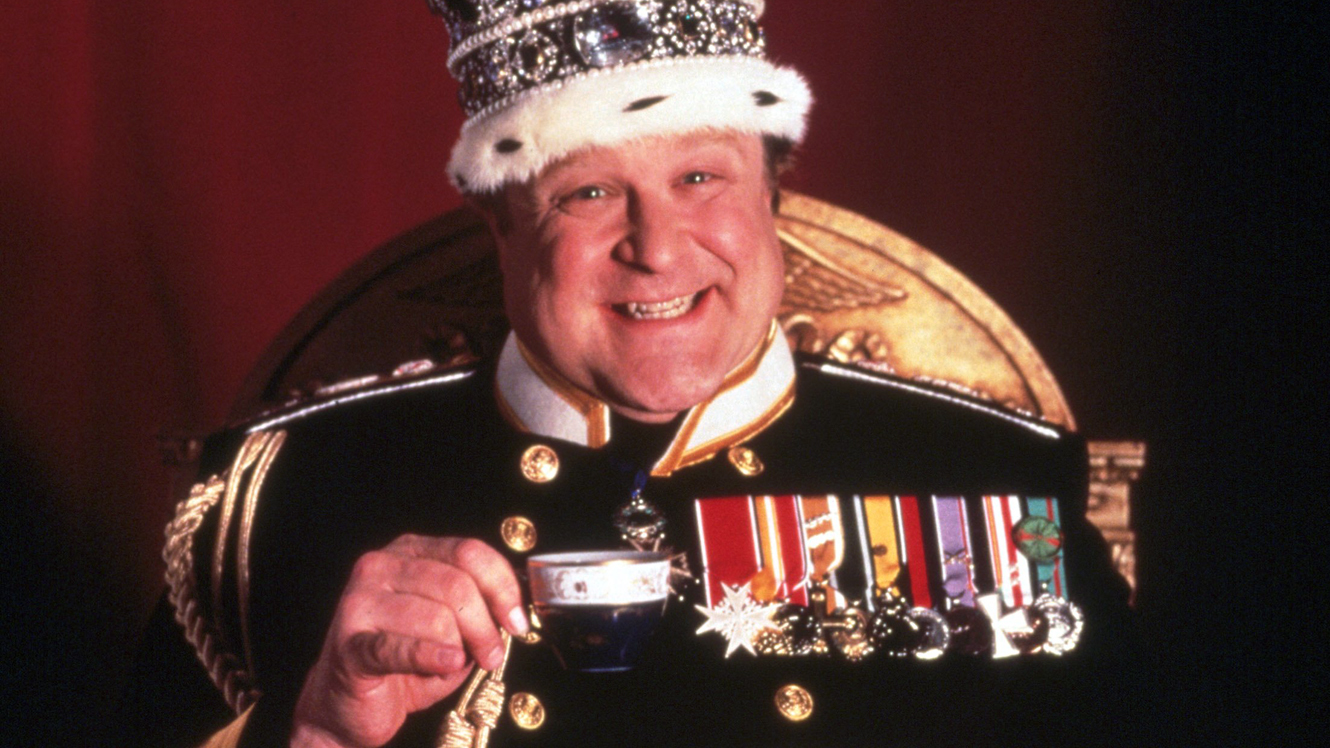 The year was 1991. Some important shit probably happened, but, more importantly, King Ralph starring John Goodman came out. It was the first starring role for the actor who was building a name for himself as Dan Conner on the hit sitcom Roseanne.

Although Goodman had been on the big screen in a number of memorable roles prior to King Ralph, this was his first chance to really carry a movie. Did he succeed?

Well, I watched it on a ten movie collection I purchased at Wal-Mart for five bucks over a year ago, so that probably sums up its place in history: right there next to Cop and a Half and Ghost Dad.

To be totally fair though, this movie did hold my attention for the majority of its run time. While this was the first time I watched it from beginning to end, I had pretty much seen it entirely via TV broadcasts over the course of its 27 year history.

I also remember my dad renting it when it first hit VHS, but the only thing I remember was the stripper covering up her bewbs with her hands (more on that in a minute).

The movie begins on a light-hearted note when the entire British Royal Family is electrocuted. Scouring the globe to find the nearest living relative, a Vegas lounge singer by the name of Ralph Jones is picked due to his grandmother having banged the Duke of Warren back in the day. While that may say far-fetched, what’s even harder to understand is how he can seemingly be both a fan of the Chicago Cubs and the Green Bay Packers.

From there, it’s a madcap romp as Ralph is molded by Peter O’ Toole to fit into royal society, resulting in more than a few monocles being popped off in amazement.

Ralph, being a fan of fox hunting, ditches the palace and runs off to an American themed strip club. There he becomes infatuated with Miranda, played by Camille Coduri,  the aforementioned stripper who refuses to strip, begging the question of how she got a prime spot on the stage if she was never willing to let her jugs spill out before.

John Hurt, the resident A-Hole of this flick, realizes he can use this little tart to oust the new king and restore his own family to the monarchy because…movie…

The movie hits a slow spot once Ralph is forbidden from seeing Miranda anymore, and plans are put in place to marry him off to Princess Anna of Finland.

Apart from the modern day Frozen references her name invokes, the princess has an uncommonly deep voice, hinting that she probably has a couple of Finnish twigs and berries she’s trying to smuggle into Britain.

She gets bonus points for lusting after Ralph’s ass and begging to be banged over some furniture while the help watches.

Her father is played by the guy who aligned with the Nazis in Indiana Jones and the Last Crusade, so it’s good to see him doing well after turning to dust a couple of years prior.

The concept for this movie sounds like one of those South Park record scratch parodies, and I hypothesize it was made to test the waters to see if John Goodman could carry a feature. Although he has help from big name British actors Peter O’Toole and John Hurt, Goodman does most of the heavy lifting, and the early scenes of him adjusting to royal life are the highlights of the film.

Obviously, it’s not a great movie, but it’s totally worth watching if you come across it on some basic cable TV channel on a Sunday afternoon.

All in all, this movie is a case of a missed opportunity, primarily being that of not getting to see Camille Coduri’s rack get motorboated by John Goodman in his Roseanne prime.