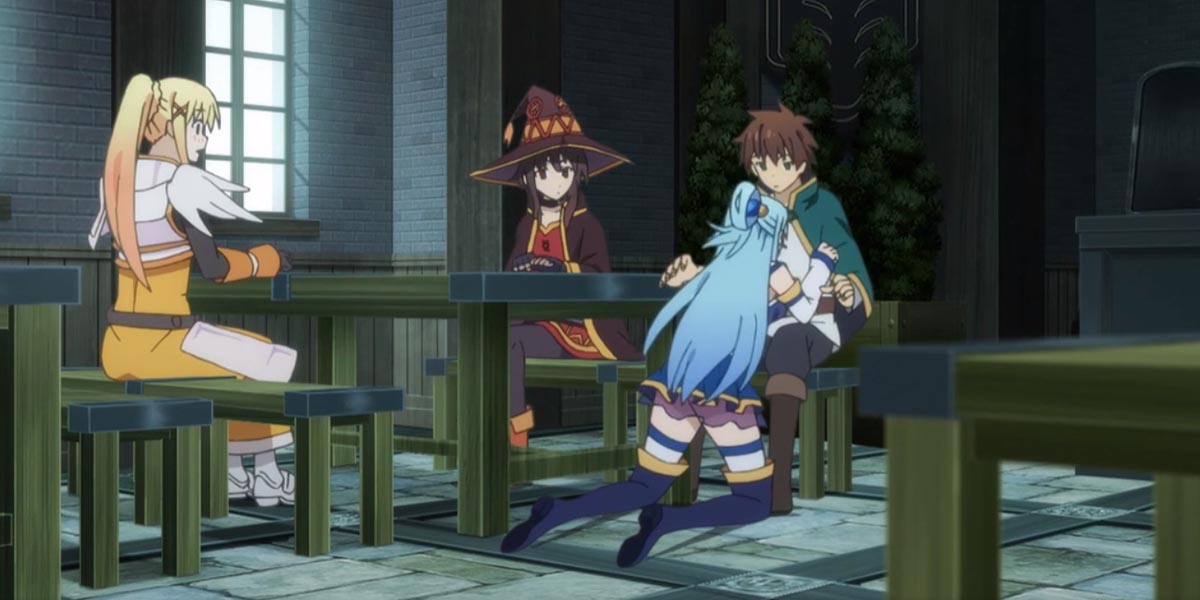 One of the most popular genres in Japanese manga and anime is isekai, where the protagonist is drawn into another world. Often the protagonist is a NEET (Not in Education, Employment, or Training) thrust into a world that runs on video game logic, where their only existing skill is actually valuable.

Although the isekai market is quite saturated, some stand above their contemporaries in the quality of storytelling and characterization.

KonoSuba, written by Natsume Akatsuki, is one of those.

KonoSuba begins with the protagonist, Kazuma Sato  (voiced by Jun Fukushima), on one of his rare expeditions from his room, pushing a schoolgirl out from in front of the slow-moving tractor that he mistakes for a fast-moving truck, and dying of shock. When a blue-haired goddess, Aqua (Sora Amamiya), offers him the chance to be reincarnated in a fantasy world, along with one item of his choice, to battle the Devil King, he takes the offer and her as well.

Once there Kazuma surrounds himself with a small party and begins a series of misadventures that bring laughter and sympathetic groans. 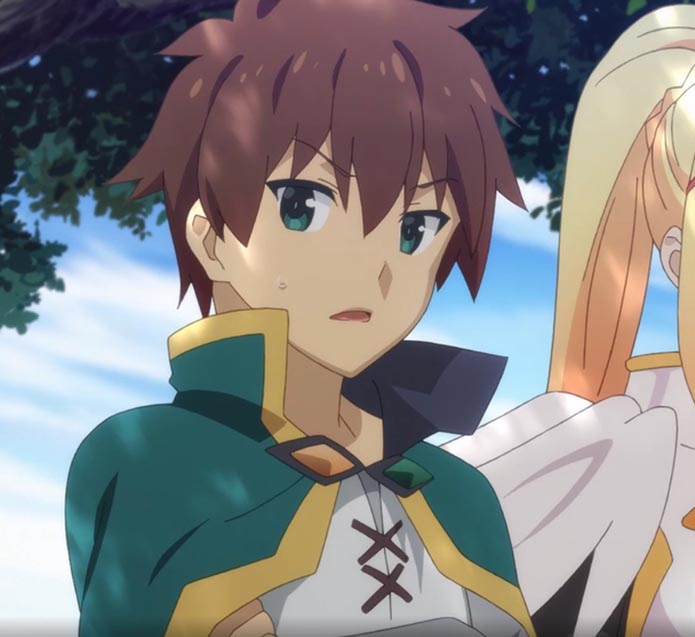 In a reversal of the usual isekai tropes, where the protagonist is noble, self-sacrificing, and often exceptionally overpowered, Kazuma is not. Kazuma is selfish, lazy, and generally motivated by nothing more than obtaining enough money that he doesn’t have to adventure anymore. He certainly does not want to face the Devil King, with the attendant risk that brings. His class Adventurer is the weakest beginner class, and its only virtue is that it is able to learn low-level skills from other classes. With mediocre stats except for luck, Kazuma is nobody’s idea of a hero.

In comparison, his party members are in powerful classes but the weaknesses of each overwhelm their strengths. 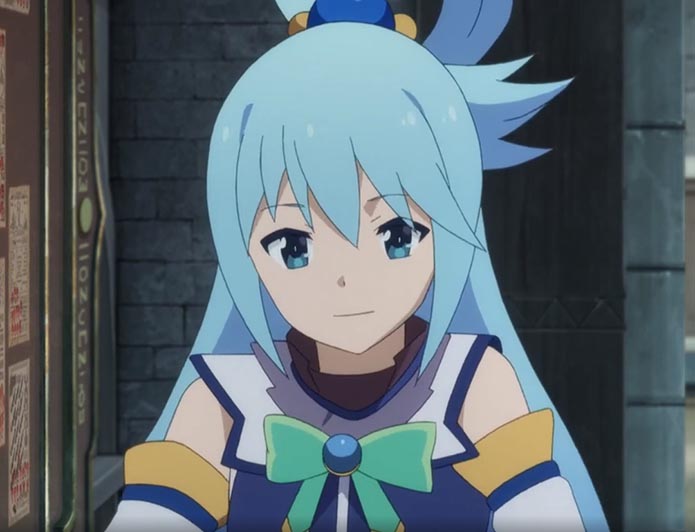 Aqua the water goddess is given the class of Arch Priest. She has water manipulation powers, healing abilities, the gift of exorcism, and can raise the newly dead. She even starts with her stats at their max level, except for luck… and intelligence. However Aqua shares Kazuma’s inclination to laziness, greed, and adds a strong inclination towards drunkenness. She is also, as implied, dumb. To return to her job in the heavens the Devil King must be defeated, a goal that conflicts with Kazuma’s desires.

If the party finds themselves in trouble there’s a better than fair chance that Aqua caused it. 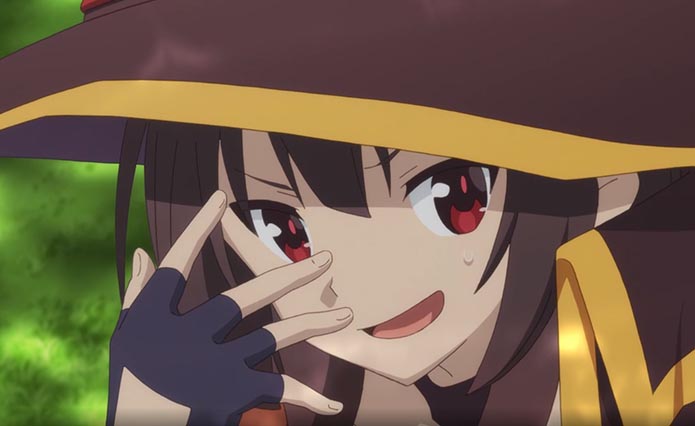 The third main character of KonoSuba is Megumin (Rie Takahashi). Megumin is an Arch Mage of the Crimson Devil clan, a wielder of powerful magic. However, because of a chance encounter in her childhood, Megumin has committed herself to mastering only one spell, Explosion, and doing so in such a way that she collapses, exhausted, after one casting, once a day. Such a spell is far from helpful in dungeons, with walls and roofs that collapse, and suited only for a takedown shot of a boss monster. At that, it has to be said, she does excel. 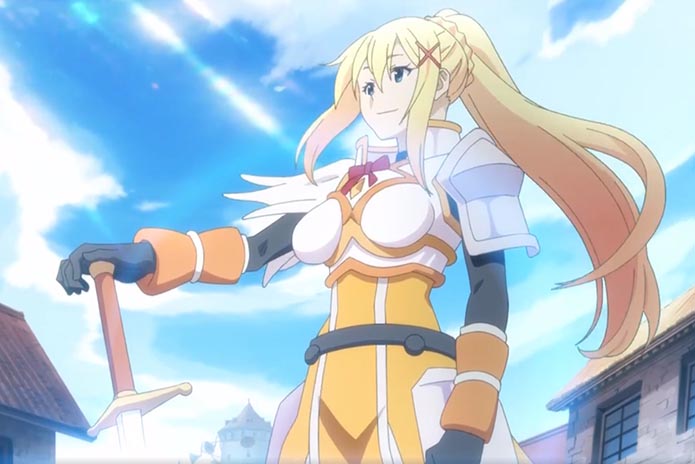 The fourth and final member of Kazuma’s party is the woman called Darkness (Ai Kayano). An immensely strong noble Crusader who fights with a longsword, Darkness would be the tank in a role-playing game. She is durable enough that, in the light novel, a sword strike against her bare wrist barely cut the skin. However, Darkness hides a dark secret. She is a masochist, deriving pleasure from being humiliated, finding Kazuma’s lack of respect for her intoxicating. Her ultimate humiliation being beaten in battle, she puts no energy into improving her sword skill, making it almost impossible for her to hit anything in combat.

Helped and hampered by these three, Kazuma must find a way to live a comfortable life with minimal risk.

The artists and voice actors of KonoSuba have done a wonderful job of bringing these lovable misfits and their misfortunes to life.

KonoSuba has two completed seasons already, the first translated into English, and fourteen light novels in the main series with eight spin-offs.