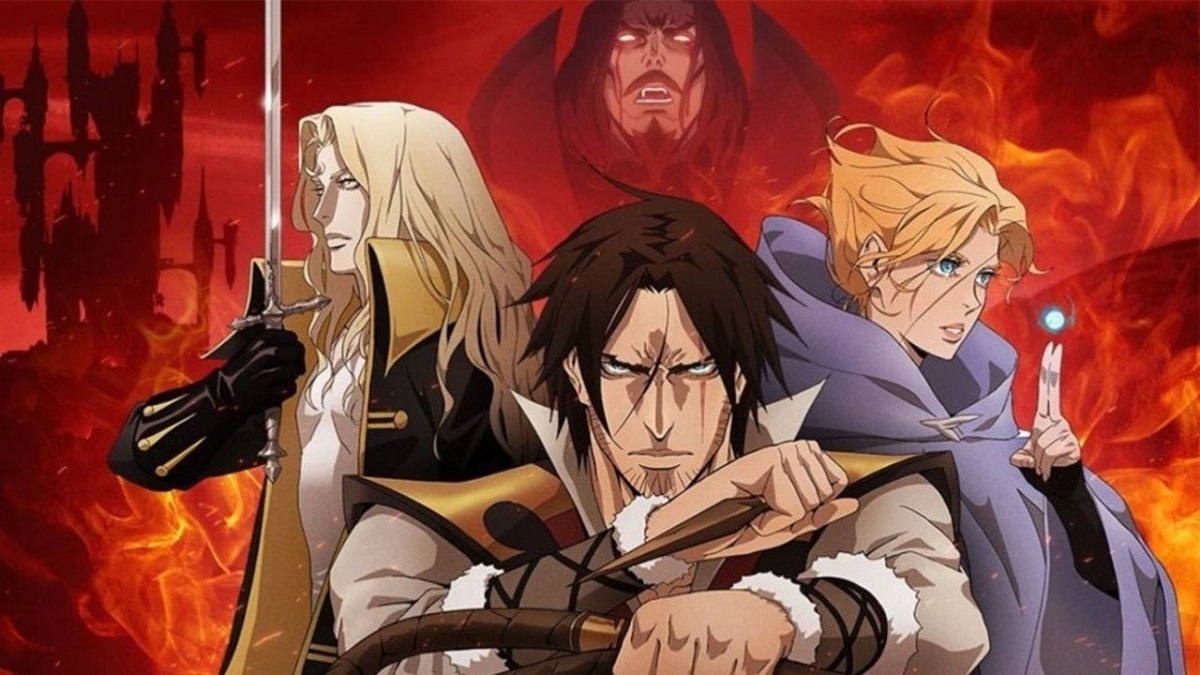 What a Horrible Night to Have a Curse

It’s been over a year since Netflix released the first four episodes of their Castlevania series. While the sparse initial offering left many viewers wanting more, the new season is here with eight brand-spanking new episodes of the series that captivated long-time fans of the series way back in 2017.

I adored the first season, even though it was fairly bare bones, and I looked forward to what the series could accomplish with even more episodes. Like the curse of the monkey’s paw, though, I should be careful what I wish for.

Being impatient for the start of the season, I checked out some early reviews of season 2. Although the reviews were overall positive, the same criticism that the bulk of the series was two sets of characters sitting around in castles was a common thread. In many ways, it felt like treading water as a way to stretch out a story based on a game where the only motivation is to find Dracula and whip him to death.

As a fan of the pseudo-anime style used in the series, I had high praise for the first season. Ironically, this season’s animation feels more rushed, and I noticed small sections where characters would talk without their mouths moving.

It was interesting to see the Belmont’s homestead, or what is left of it; however, Dracula’s traveling castle of magic didn’t offer nearly as many interesting visions as it did in the first few moments of season 1.

For the most part, Dracula sits in his room staring into a fire only to occasionally walk out into his great hall to be called on his bullshit before returning to his room.

Some of the jabs between Alucard and Trevor are humorous as it’s interesting to see how a vampire and vampire hunter would interact in their uneasy partnership.

It seems that Trevor has fallen victim to being a white male character in 2018 and is usually the brunt of jokes rather than the kick-ass hero he should be. Sypha is more or less there to move the plot forward with her magic.

Some series favorites show up. Sadly, there is still no Grant which pisses me off immensely. Slogra and Gaibon make brief appearances early on, but they could have been easily replaced with other monsters and it would have made no difference.

I was most interested in the role of Carmilla, seeing as her character has always interested me in the games. Instead of a Cersei Lannister, though, she just comes off as a total cunt who doesn’t try too hard to keep her motivations hidden. I guess there’s not a flashing sign over her head that says “Traitorous Bitch” over her head, so the creators showed some restraint.

Pivotal to this new season are the characters of Hector and Isaac who previously were only found in the throwaway game Curse of Darkness on the PS2 and original Xbox. These two characters are devil forgemasters, or some shit, and despite their human handicap have been entrusted as Dracula’s top generals. I don’t remember the game too well, but it’s funny seeing the “forgemaster” term being taken quite literally in the show.

Both Hector and Isaac are portrayed as loyal to Dracula, but Hector goes against his master’s wishes a little too quickly. Isaac is the more interesting of the two as his prior life as a slave is briefly shown, and he’s willing to give up his life for Dracula’s for a reason that’s not entirely stupid. His epilogue is the most interesting part of the final episode.

The series tries to expand on its lore by bringing in vampires from around the globe. The Viking vampire Godbrand offers some comic relief but quickly overstays his welcome.

The other vampire lords don’t make much of an impact.

Like most Netflix shows, the season would benefit if the number of episodes were decreased, as this show seems to work best when it’s leaner and meaner.

THERE BE SPOILERS HERE

The seventh episode is an all action, free-for-all where our heroes charge Dracula’s castle. The show does a good job of showing how much of a powerful badass Dracula can be.

However, instead of fighting in the grand throne room at the top of the castle tower, the fight feels like it takes place in a few tiny rooms. It’s very claustrophobic and doesn’t add to the epic feeling the fight should have. Again Trevor is pretty much useless, and it’s more Alucard’s time to shine.

The fight comes to its conclusion when Dracula enters Alucard’s childhood room. This felt really odd as he hasn’t shown much of a fuck for Alucard since the series began. I guess it’s the creator’s way of trying to show his connection to Lisa and how far he’s fallen.

Nevertheless, it felt abrupt and stupid, especially since Alucard said he aged quickly, so his childhood room wouldn’t have been needed for long, but whatever.

The season ends on a shot of Alucard breaking down and crying as he is left to guard Dracula’s castle and the Belmont library alone. For a guy whose mother was burned at the stake a little over a year ago and who had just murdered his father with a stake, it shows his human side coming through as dominant. They should have at least made him cry bloody tears or have the tears burn his flesh. As it is, it just feels like an odd note to go out on.

Upon arrival to Trevor’s dilapidated family home, he makes mention of his ancestor Leon Belmont who left France for Eastern Europe because that’s where all the vampires were. As a fan of the PS2 game, Lament of Innocence, I was glad to see this game get a shout-out in the series.

From a timeline perspective, Lament of Innocence is the first time in the series a Belmont set out to destroy a vampire. However, instead of throwing down with Dracula, Leon fights some scrub named Walter.

It also shows where the famous Belmont family whip originated from and why it is so powerful against vampires. There’s also a giant half-corpse hanging in the basement.

The gameplay is pretty repetitive as a lot of it boils down to entering a room, killing all the enemies, and moving on to the next room. It tries to bring in some of the Metroidvania gameplay as backtracking to the different sections of the castle is necessary in order to unlock all its secrets, but it’s more optional than necessary.

Some will argue the previously mentioned Curse of Darkness being the high point of the series during this era, but I give the nod to this game. It’s not overly pretty and most of the castle is pretty sparse, but it proved that Castlevania could be done in 3D.

It’s been stated that some of the assets for Lament of Innocence were lifted from the Dreamcast Castlevania game that never came to pass. Sadly, this game doesn’t put Death on a horse or have a full figured Medusa. Instead, Death is the final boss (lame) and Medusa is a giant floating head.

3D Castlevania games have always been the outliers in the system, and the series consistently shows it works best in 2D. When looking at the main series, there are only three games that really venture into the next dimension, as the two N64 titles are more or less the same game.

When the Lords of Shadow timeline is introduced, it ignores the previous storyline, and, again, the best title in that series is the 2D offering.

At the time of this writing, Konami doesn’t appear to have any new direction for the Castlevania games and is content to re-release some of the classics on occasion. Perhaps they will surprise us and announce a new title soon, but as for now Castlevania only lives on by this show.

The Bloodstained series is the spiritual successor to Castlevania. So far, though, we have only had the brief throwback game to play, and the Kickstarter backed game has faced numerous delays. Will it be worth the wait? Only time can tell.

I’m a little surprised they wrapped up the Castlevania III arc in this season, and I’m assuming the Curse of Darkness storyline will be incorporated next season. Presuming there is a next season. I’ll still watch the new season, but I won’t be waiting with bated breath as I did for the past year.