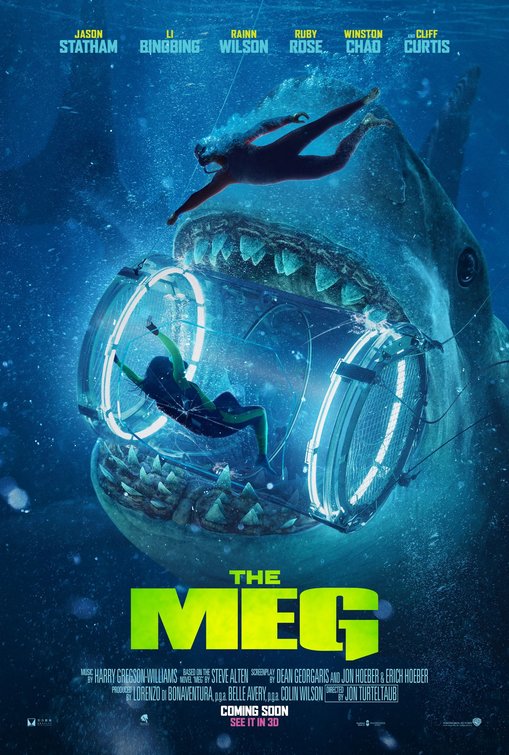 It’s Been A Long Road

We have had quite a bit to say about The Meg here at FilmGoblin over the past few months.  We talked about its long history with the online movie community here.  We couldn’t quite believe we were finally seeing trailers for a movie that had been so long in Development Hell here.  We marveled at the comic book sensibilities of the Asian marketing posters here.

Finally, we were lucky enough to talk to the man behind The Meg, New York Times best-selling author and creator of the world of Jonas Taylor, Steve Alten.  He told us the story of the struggle — bruises, skinned knees and all — to bring his book to the screen here.

They Don’t Make ‘Em They Used To!

Alongside the wait being almost as monstrous as the toothy star of this movie, there is a second key reason why we at the Goblin — and indeed in the wider online movie community — have been looking forward to this movie.

It’s a $150 million tentpole blockbuster from a big studio, and it’s not superheroes or Star Wars or starring Dwayne Johnson.  These days movies like this are as rare as rocking horse poop!

For these reasons almost everyone we speak to is willing this movie to do well, hoping studios can still see a future for big-budget adventures like this.

So Is It Any Good?

Trying to remain as objective as possible, having followed this movie’s development for so long, having read the six (yes, SIX!) books in The Meg series and having had the opportunity to chat to the author, is potentially a struggle.

However, as we don’t shill here and refuse to become creepily aroused by movies while fondling pwesents, I am going to try my hardest.

Also, our Editor-In-Chief just sent me a WhatsApp message that simply said “I know where you live!” so I consider myself warned.

In short, it’s a blast! An absolute blast! It’s not high art and it’s not Oscar bait.

It knows exactly what it is and what it is trying to be and just blows straight through to the sharky fun. The makers clearly understood that unless you are dealing with the perfectly acted and scripted humanity that sets Jaws apart as the high point of all shark movies, probably never to be beaten, then shark movies drag when the shark isn’t around. So they just power up straight to the next shark scene.

Whether by accident or design, this means the movie doesn’t get itself bogged down.

It doesn’t spend precious time away from the shark to explain the “what” and the “why” about the research station Mana One. Two or three lines of exposition and away we go.

A characters ex-wife being in a movie would usually set in motion a tortuous series of contrived events to have the characters learn lessons and reconcile. Not here, that would just get in the way of trying to stop this damn shark.

Jonas does have a small lesson to learn about choices between saving people and leaving people. It’s wafer thin at best. Usually, that would mean the character doesn’t have an arc and makes the movie shallow. However, this is countered by The Stath playing Jonas so straight, and so incredibly brave and heroic once he gets going, that it just doesn’t matter.

Seriously, if you were to make a drinking game out of this and had to drain the glass every time Jonas does something unbelievably brave then you would need a new liver.

As it knows all you want is another shark sequence it also doesn’t waste massive amounts of time on character building. It just gives you enough to make you care when they are in jeopardy.

Mac and Jonas are great friends with history? You know this with a line of dialogue and a warm greeting, then off it goes.

No flashbacks and contrived coincidence.

With its total lack of pretentiousness, it’s a safe bet that the moment you learn just enough to care about a character then they are going to die.

It’s also very funny when it needs to be. There are a couple of clear, good-natured nods to Jaws that you will instantly pick up on.  The Finding Nemo little gag made me chuckle.

It is not perfect. In fact, viewed really harshly it has a number of problems. However, these just get bulldozed out of the way by a sheer sense of fun. Turtletaub directs it with the same zippy approach as the National Treasure movies.

He looks us in the eyes and says “Hey kids, you like shark movies don’t ya?”

”Well then get a load of this!”

Is It Very Different From The Book?

Well, it wouldn’t be the first shark movie to differ wildly from the source material as we discuss here, but chief among the problems are the deviation so far from the book.

Beyond the simple premise and the character names, there is very little in there that is lifted straight from Alten’s novel. There are some core concepts from across the entire Meg series of novels that are recognizable. Things that are close to scenes, sequences and ideas from The Trench, Primal Waters and Hell’s Aquarium make appearances but they are passing and only noticeable to a fan of the books.

Missing are some of the scenes that define the book, such as the T-Rex vs. Meg in the shallows in the prehistoric novel opening and the Meg vs surfers scene that was so shamelessly copied for Jurassic World 2.

Jonas is changed from sub-pilot and paleobiologist into a straightforward underwater rescue specialist. The science heavy lifting is done by Li Bingbing’s marine biologist character.

The bug-nuts insane ending to the Alten novel is also largely swerved but there was one glorious moment when it really looked like they were going to go for it, only to let me down!

The lack of blood has been a talking point, along with the 12A / PG-13 rating.

Some of the kills are pleasingly inventive and there are some very well executed jump-scares that got shrieks from the audience I saw it with, but there is no doubt the lack of gore makes the endeavor feel unnecessarily sanitized at times. Remembering how visceral the Alten novel was in places on serve to exacerbate this disconnect between page and screen.

Whereas Piranha 3D plowed the same path of playing it totally straight, light and just bringing the carnage, it knew what it was shooting for and made itself a splatterfest homage. There will always be a suspicion that Meg could have used the same approach, which is just not something we’re going to get with a PG-13 on the poster.

Another standout issue is the Chinese acting.

A lot of Chinese money went into this movie hence the location switches and the cast full of well known Chinese acting talent like Bingbing. However when these guys are delivering dialogue (some of which is hokey yet essential for this type of movie) in what is clearly a tricky second language then the line delivery comes off as stilted and completely unnatural at times.

I am sure the roles would be reversed with a Westerner appearing in a Chinese movie attempting the language. And little fat Chinese boy on the beach is perhaps the worst of all. You will see what I mean.

Speaking of which, the main event beach attack sequence is too short. Zorbs and swimming platforms make for entertaining kills but there was a chance for more terror here.

Overall though it’s just so much fun and, like an enthusiastic Labrador puppy of a movie, trying to please you.

Fun, unpretentious, exciting popcorn fare and a very fine way to spend an afternoon at the movies during the summer break.  I had fun.  I reckon you will too.

We Sit Down With The Creator Of THE MEG, Steve Alten...

New Japanese Trailer & Posters For THE MEG Are Bonkers

After 22 Years In Dev Hell, THE MEG Finally Surfaces!

THE MEG: Trailer For Statham Vs Shark Is Incoming