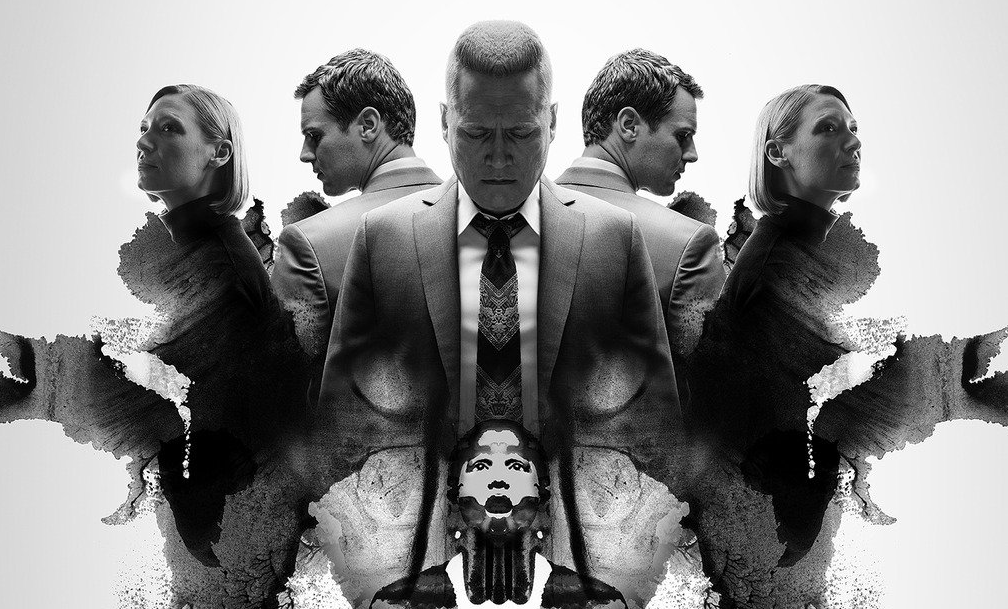 Let’s Start By Asking Some Questions…

How do you dance with the Devil in the pale moonlight and not lose your soul in the process?

How do you catch a killer that’s smarter than you are?

All of these questions and more are answered in the second season of Netflix’s show, Mindhunter.

New to the core cast this year are Michael Cerveris as Assistant Director Gunn, replacing Cotter Smith as Unit Chief Shepard, who gets off a great retirement rant near the middle of the first episode of the second season.

The writing duties this year have been handled by John Douglas and Mark Olshaker. Five of the episodes this season were directed by David Fincher (Fight Club, Zodiac, etc.),  with Carl Franklin, and Andrew Dominik among others handling the directing of the remaining episodes.

I have to be upfront before I get into my deeper analysis of the show: I find that most police and legal procedural shows that are consumed by the popular masses are mostly pre-fabricated, unbelievable nonsense.

Mainly because I have lawyers (criminal and otherwise) in my family and grew up with intimate knowledge of the nature of the sclerosis of government bureaucracies.

I also have a background that has allowed me to intersect with professional mental and emotional health fields such as psychology, social work, and others. Trust me, many of those people–if they’re investigating you–are not your friends.

I have also had direct interaction with the banal, boring, and mindlessness that accompanies the reality of many crime investigations.

I find shows like Law and Order: SVU to be light entertainment, and Criminal Minds to be the Hollywood vision of the world of actually hunting and examining the mentality of serial killers: Just enough techno-babble sprinkled in between shots of Shemar Moore’s pecs.

However, Mindhunter, in its first season, got closest to the truth of the nature of serial crime, inescapable insanity, and undiagnosed mental health pathologies, and just how unbalanced you have to be to daily walk around inside the heads of truly wicked people, from Richard Speck to Ed Kemper.

In its second season, Mindhunter has not shied away from shedding an unflinching light (usually in pastel blues, grays, and muted greens) on what exactly it takes for the FBI’s Behavioral Sciences Unit (BSU) to actually exist in the world.

But, you have some questions you want answered, so let’s get to them:

Is it ‘woke?” – Well, in addressing the complications surrounding investigating the spate of child killings in Atlanta in 1979-1980, the show really chalks the lack of action up to politics, not race, although race is presented as a determining factor in how local Atlanta PD dealt with the fact of black children dying.

To its credit, Netflix and the producers of Mindhunter (Charlize Theron, among others) avoid the easy moralizing in season two that we have come to expect from the heights of entertainment in 2019.

Is it true to form from Season One? – Yes. The atmosphere of tension, drawn-out past the point of the viewer being comfortable is still there. Fincher’s direction is top-notch as is Carl Franklin’s and Andrew Dominik’s efforts. The atmosphere of washed-out blues, grays, and greens is still here in the color palette.

The characters are more fleshed out and realized this season. And, the set design is amazingly accurate to the late 70’s early 80’s with nods to the end of the manufacturing era in the US: There is a great scene with Holden and Tench showing up in Atlanta, and the task force put together to investigate the child murders in Atlanta is located in a defunct and closed down car manufacturing plant.

You have to focus on what’s happening in scenes and actually look at character’s facial expressions in order to pick up on the sub dynamics between characters, particularly in the Manson episode, number five, and the Wayne Williams episodes, eight and nine.

Are there interesting killers this season? – Yes. Son of Sam, BTK, and of course, the big dog, Charles Manson are all explored in this season. Ed Kemper makes his return as well.

The ongoing subplot BTK (which began in season one and continues here) is also allowed to tense up and then slow down (and creates an interesting bookend effect for the season), as the BSU is tasked with navigating other killings and interviewing other killers.

The most interesting killer is, of course, Wayne Williams, the person who was eventually jailed in response to the Atlanta Child Killings.

My Own Thoughts on the Show

My thoughts on this show are complicated and deep, but let me make them as clear, and as concise as possible.

There was a two-year hiatus between us leaving Agent Holden on the floor, following a panic attack, generated by interacting with Ed Kemper, season one’s standout killer.

I think that this is a good thing because the show is trying to be accurate in many areas. But the show is also trying to take its time to build an argument that answers the question: What broke in the spirit of the United States after WW2 that allowed the number and intensity of serial killings to increase?

In our media age of splashy, mass killers, Mindhunter recalls that, through its use of shadows, light, tension, and glances, it wasn’t always this way in history and seeks to honor that history with respect.

I know that Fincher has said some nonsense about five seasons of this show, and I come down with the opinion that, if it takes five seasons to get to where you want to go, then take five. If it doesn’t take five, then don’t.

The investigations into the child murders (all 28 of them, still unsolved) were complicated by dynamics of the effects of politics, racial divisions in Atlanta at the time, and the need for economic and social growth in the “New” South.

Historically, the local Atlanta PD was rife with Klan members and Klan membership (and sympathy with Klan activities) at the time did ascend to the highest levels in public administration of the city — in spite of having a black mayor.

The other dynamic is at the time (1979-1980), the FBI in general, local law enforcement in the South in particular, and the media had (and continue to have) little interest in studying or examining the psychological pathologies of black men who commit multiple murders. How many multiple murders are deeply investigated in Chicago even now?

For sure, the psychological underpinnings may be the same as far as motivations go between black and white serial murderers. But, actual blindness of curiosity or interest by people in authority about the impact of those distinctions in motivations between killers became evident in investigating killings involving other minority groups as well over time.

This lack of curiosity was constantly explored on the show during season two, most notably via the interview that Dr. Carr and Agent Smith conducted with Paul Bateson in episode six. And fortunately, “woke” answers that would make a 2019 audience happy, aren’t offered to these problems in season two. Wayne Williams’s manipulation of the political and justice system that sought to catch him shows this as well.

Agent Holden’s continued frustration with the political maneuverings of the investigation is apparent throughout season two, as well as his blindness to the impact that racism might have on his profiling of a killer. Agent Jim Barney tells him early on, “You’re from up in Virginia. Things work a little bit differently down here.”

Finally, the show is built to answer questions about the very real, human frailties that even the people who look into the minds of serial killers have to face.

How do you rebuild a family after a tragedy?

How do you deliver justice–and manage vengeance–in the body politic?

How do you have a human connection with someone when all you do is walk around inside the minds of deeply twisted people?

How do you hold on to your soul?

From Tench’s wife making her own plans following a tragedy, to Dr. Carr’s inability to create a genuine human connection in an intimate relationship, to the fact that Agent Holden is still, really a cipher (mostly to himself), the show does not shy away from looking at these hard dynamics in the face. Plus, MindHunter avoids easy answers that would make the viewer feel comfortable.

MindHunter is one of those rare shows that gets better and better every time you think about it.

It is unsettling in its unflinching look at human evil. It thoroughly responds to the culture around it and addresses it and critiques it, not from the 2019 perspective, but from the 1970’s perspective of the show.

The political maneuverings between the FBI, the Justice Department, and the Mayor’s Office in Atlanta is really pushed in the show, and the direction of Andrew Dominik and David Fincher is magnificently exploited in drawing out the dynamic tensions between people’s political motivations and the lived realities of grieving mothers who want definitive answers.

Anna Torv as the academic is beautiful to look at but appropriately off-putting, cold, and fighting to hide her sexual orientation in a “man’s” world. Her entire speech to Lauren Glazier in episode eight brings the cold, untouchableness of her character home.

Jonothan Goff is great as an FBI Agent driven by intellectual idealism, raw instinct, and a lack of good sense who’s eventually going to be thrown out with the trash. The sequence in episode seven of him and Albert Jones (Agent Jim Barney) sitting in the car waiting on a body to fall in the river really brings this home.

Holt McCallany continues to impress as the gruff reminder of the old, J. Edgar Hoover FBI—hard-drinking and hard questioning—but also a man who comes from a time when right and wrong seemed clearer and better defined. There is no better moment in season two than in episode five when he faces off against Manson.

Finally, Joe Tuttle’s portrayal of nepotistic, political advancer, with no apparent practical skills, who ultimately surprises everyone by actually being competent, is interesting to behold. He turns the corner in episode number three with some surprising insights and really brings it home in episodes number six and seven.

Overall, MindHunter has not “nuked the fridge” with its second season.

I would say, it’s probably going to be nominated for a few well-deserved awards here pretty soon.

Check out Mindhunter, Season Two, this weekend. You won’t regret it.