Night Of The Lepus is notorious for being one of the worst movies ever made. Featuring giant, murderous, mutant bunnies, it’s a great alternative to the usual Easter fare. Here’s a holiday tradition from our family to yours.

What Were They Thinking?

Night Of The Lepus credits the book The Year of the Angry Rabbit by Russell Braddon as its basis. The book was written as satire and took place in the author’s native Australia. The film moves the action to rural Arizona and plays everything straight as 70s Eco-horror. It’s a very odd choice because it doesn’t seem possible to make giant rabbits scary.

Director William F. Claxton had done mostly westerns and it shows. The story plods along and there are no attempts at building any suspense. None of the usual horror film point-of-view shots or jump scares are used. As the bunnies run across the miniature sets, the footage is slowed to make them seem larger. An eerie, low chatter sound effect is used, but there is no escaping the fact that we are watching rabbits hop across the screen. How this movie was ever green-lit is a wonder.

There is some gore, one quick shot of a body with a dismembered arm, but it’s basically people with ripped clothes splashed with red paint. The most laughable effect is some man-in-suit shots of bunnies jumping and pawing people. Everything is a quick shot (because it’s so goofy), including ridiculous close-ups of rabbits with ketchup (tomato sauce) on their faces. Even worse, when there are actually long shots of the rabbits, it looks like some kind of wire apparatus was used to push up their lips at an attempt to make them look menacing.

While the question of how such a film was made may never be answered, it’s quite clear  the studio knew they had a hard sell on their hands. Using the word lepus to somewhat obfuscate the subject creature of the film and the poster and trailer opted to hide the fact that the film was about giant killer bunnies.

The Bennetts decide to use hormones to disrupt the rabbits’ breeding cycle. Their daughter, Amanda wanted one of the rabbits as a pet and Gerry conceded to let her keep a control subject. Unbeknownst to her parents, Amanda picked a test subject and switched her pet with one from control. The bunny soon escapes due to the anti-rabbit fervor of Cole’s son.

Soon after, a dead miner leads the Bennets, Elgin and Cole to an old mine where they discover the giant rabbits. They try to bury the animals inside the mine with an explosion. The plan is about as stupid as trying to drown fish in water. The burrowing creatures escape and continue their killing spree. Elgin finally concedes that they should inform the authorities. No one questions anything about the preposterous scenario and The National Guard is called in.

A plan is devised to use electrified railroad track to kill the rabbits. There is a sequence where the National Guard alerts a drive-in theater of the impending advance of giant killer rabbits. They recruit the vehicles to assist in making a barricade to funnel the rabbit towards the tracks. Again, the outlandish premise is just played straight, no one questions anything and they play along. The bunnies are fried and the day is saved.

In the Eco-horror genre the film doesn’t really make much sense either. The scientists who spawn the monster aren’t dabbling in the playing-in-God’s domain trope; they are earnestly trying to find an alternative to outright dumping a poison into the environment. Even though people are killed, the kids who actually are responsible for releasing the creatures never have to fess up to their actions. There is no comeuppance for any of the involved parties, only innocent people are killed. Any kind of message is muddled and is handled just as poorly as everything else in the picture.

The legacy of NIGHT OF THE LEPUS as a terrible film is deserved. The film really should have gone for camp or satire, but the fact it wants to be taken seriously is stupefying. While the movie was referenced in Mystery Science Theater 3000 it was never used as an experiment. The Rifftrax team of MST3K regulars finally gave it a skewering it deserved.

If you’ve seen the movie before or never gone down this rabbit hole, you should give it a watch this Easter. Sure, it can be a bit of a slog, but the unbelievable premise and cheap special effects provide enough laughs to make it worthwhile. Giant rabbits aren’t meant to be taken seriously.

For more of our honest opinions on movies and shows check out our other reviews. 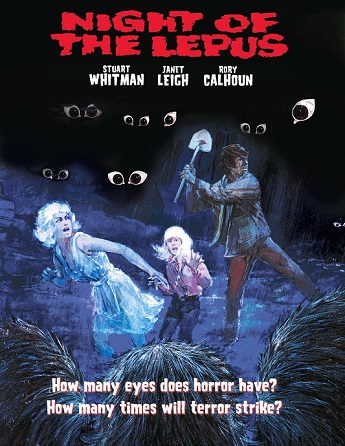