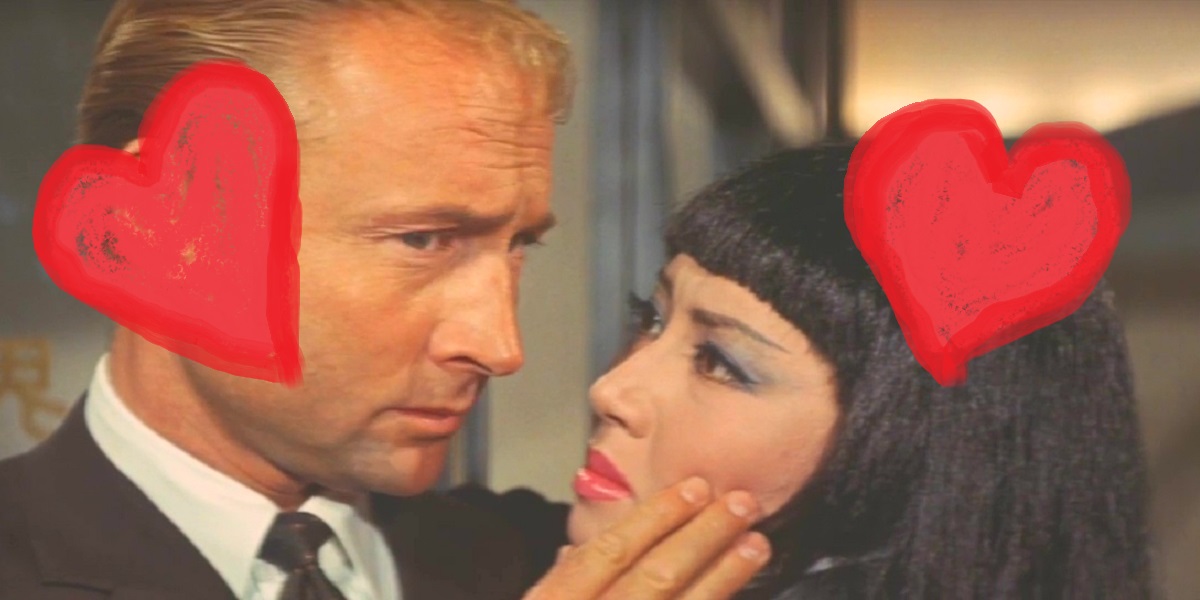 The Gist Of The Split

Foreign correspondent Larry Stanford (Peter Dyneley) is finishing up his post in Japan, but has one last story to cover about Dr. Suzuki and his experiments. Poor Larry is drugged and injected with a serum which quickly turns him into a hard-drinking, lecherous jerk. In order to keep his test case from leaving Japan, Dr. Suzuki sets his mistress/assistant Tara (the fetching Terri Zimmern, in her only screen role) to sink her claws into Larry. Larry’s boss is concerned about the sudden transformation and sends for Mrs. Stanford (played by Dyneley’s real-life wife Jane Hylton). She finds Larry with Tara, yet is determined to stand by her man and wait for him to come back to her.

Larry’s transformation soon turns physical and he starts a murder spree. Larry doesn’t seem to remember when his monster side takes hold, but when he seeks help it’s too late.  A monstrous head starts growing from his shoulder and he is on the run from the police (led by Jerry Ito, who played Nelson, the main bad guy in MOTHRA). He ends up back at Dr. Suzuki’s, and finally his monster half completely separates into an ape-like monster.

Two Heads (And Hearts) Are Better Than One

For its time, THE MANSTER has a couple of good shock scenes. If you are an EVIL DEAD fan, it will be easy to see the influence the film had on Sam Raimi. You could also say that this is the first Body Horror film. It’s an unusual film because here the protagonist gets to engage in infidelity and act on repressed desires, but still has a somewhat happy ending. After Larry defeats the monster, he gets to be with his wife. At the time there seemed to be an enforced code that transgression required comeuppance. It’s also notable because you could say the man gets both girls at the end. When Larry splits into two beings, the monster half grabs Tara (and then chucks her into a volcano to give her a just end) and he still gets to be with his faithful wife. 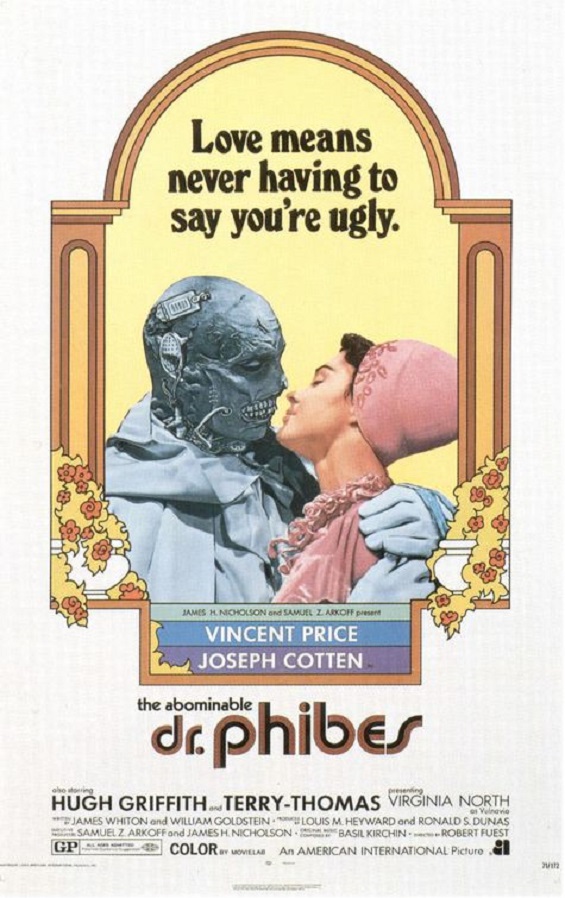 The Man With The Plan

Dr. Phibes (Vincent Price), who we learn was an expert in music and theology, starts a killing spree in London in the mid-1920s. The killings are loosely based on the Biblical ten plagues of Egypt. The police find that the first few victims all worked under a Dr. Vesalius (Joseph Cotten). Eventually they realize that the killings relate to all the medical staff that were unable to save the life of Phibes’ wife, Victoria (an uncredited role by Caroline Munro). They police, and Vesalius finds that Victoria’s remains are not in the mausoleum and that Phibes likely faked his death.

The story culminates with Phibes taking revenge on Vesalius by kidnapping the doctor’s (first-born) son and laying a trap to save the boy’s life. The boy is saved, but ultimately Dr. Phibes escapes capture.

‘Til Death Do Us Part (Or Longer)

This is a revenge movie based on Dr. Phibes’ love for his wife. The film has comical kills; the highlight is a brass unicorn catapulted into one victim. It’s hard not to enjoy the villain’s quest, as Vincent Price seems to relish the role. He does not speak a word, since his character can only speak via special equipment, so it’s a joy to watch him silently emote. As a monster, Dr. Phibes falls on the disfigured-man side of the spectrum, but the makeup for the final reveal is iconic. The sequel (DR. PHIBES RISES AGAIN) ultimately builds on this idea that Dr. Phibes will able to be with his wife again (and is willing to kill again to do so).

I MARRIED A MONSTER FROM OUTER SPACE 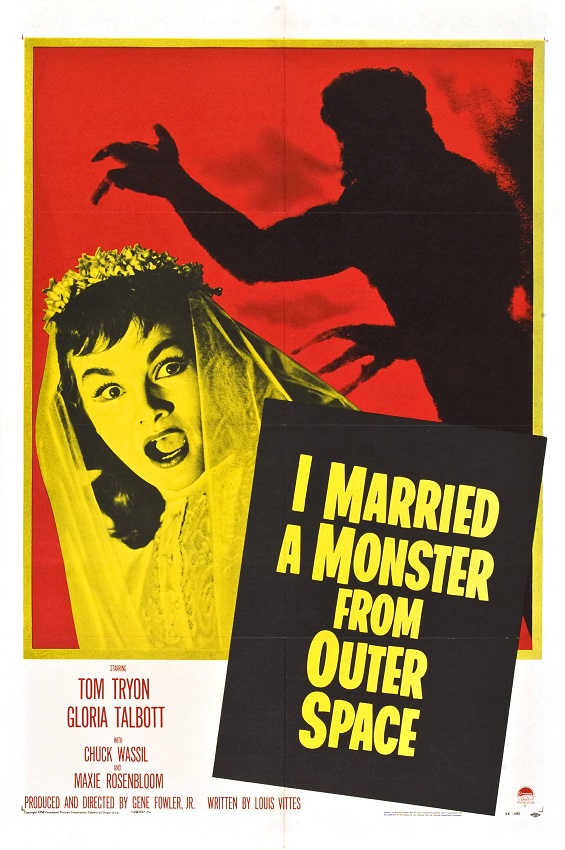 Just before Marge (played by the lovely Gloria Talbott) and Bill are to be married, Bill is abducted and replaced by an alien. Marge finds married life to be unfulfilling. Her husband seems different and they aren’t able to conceive.

Marge’s suspicions ultimately lead her to follow her husband at night, and she sees the alien leave its shell body to enter a spaceship in the woods. She soon finds that no one will believe her and that the police have been replaced by aliens. She confronts her imposter husband and he explains that he is from a dying race that needs to find females to repopulate. He says they will find a way for Earth women to birth their children. Marge is able to convince the town doctor of the situation and he raids the maternity ward to rally some troops. The aliens are thwarted and the abducted males are freed.

Where The Heart Is

This is a decent sci-fi film that might be betrayed by its dated title. It originally played as the second feature with THE BLOB, so the film never had a chance to shine from the start. The 1950s were a simpler time, but the fear of not really knowing who you are marrying is a clever hook to hang a sci-fi film on. It twists the Body Snatcher concept from politics to marriage. It’s also interesting to point out that Fake Bill is pretty much responsible for the death of his race. Fake Bill explains that inhabiting their human shells have given them human emotions. The fact that Fake Bill started to feel attachment for Marge, and hoped that she would come around, instead doomed the mission. Except for Gloria Talbott’s Marge, none of the other women seem to see bizarre changes in their men. It’s interesting to look at what the film says about marriage. When the real Bill wakes up, he should know he has a keeper.

Those are the picks for some twisted love stories this year. You can find these fine films on DVD, Blu-Ray and streaming.