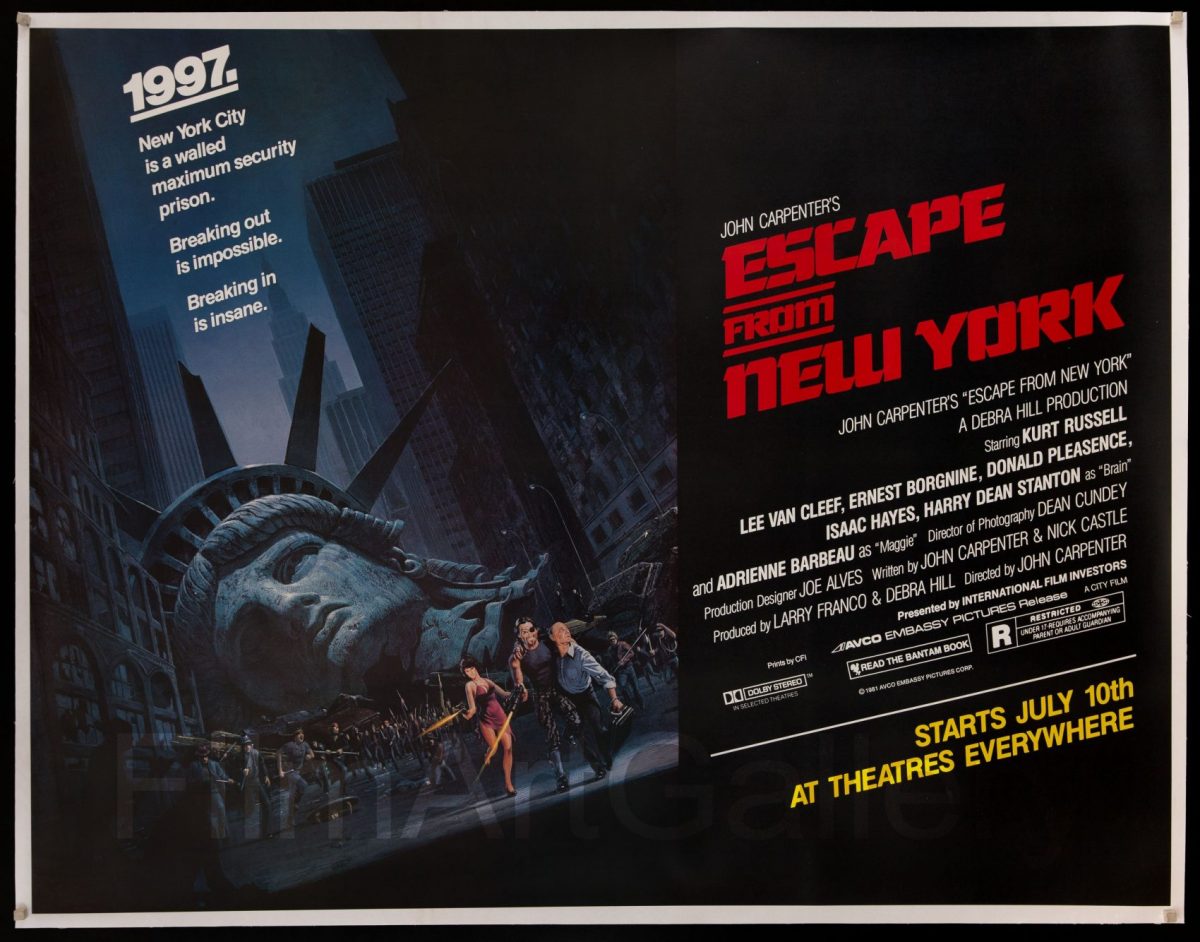 Welcome to the FilmGoblin inaugural episode of Movies for Guys Who Like Movies. Each week we will reflect and pay homage to great cinema from a bygone era before Hollywood became overrun with soyboy pussies.

Set after World War III in a presumably, post apocalyptic America, crime and disorder has become so bad in major cities that the government has decided to wall them off and make them giant prisons.

Somehow socialist terrorists get aboard Air Force One during the President’s (played by frequent John Carpenter collaborator and legend Donald Pleasence) trip to deliver a non-descript MacGuffin to the U.N. To officially end the war and bring about Peace. The plane goes down into Manhattan. The heart of New York prison. Only one man is a badass enough to go in and get him, S.D. Bob “Snake” Plissken.

If you aren’t a complete pussy, more concerned with your Wayfair catalog, Escape From New York has it all for you. Irradiated cannibalistic gangs, sick Fallout type weapons and historically amazing character actors. It’s Mad Max set in the New York boroughs.

It also has this guy.

It even features a spiked baseball bat wrestling death match with Ox Baker.

The way John Carpenter framed this scene was chilling and terrifying.

Snake makes his way to the President’s escape pod only to find it empty. The abject terror John Carpenter produces by using silence and making the grimy, vastness of New York seem claustrophobic, teeming with monsters behind the walls is an astonishing feat. The fact that this movie was made for $6 million dollars is even more astounding, it looks like they spent 5 times that.

Along the way we meet the de facto Warlord, the Duke of New York, played by Issac Hayes. He’s A-number one and he has kidnapped the President. He cuts off one of his fingers and he makes him wear a hooker wig while he plays target practice with him. The Duke is not subtle, he’s A-number one. He wants off of the prison Island and he plans on using the President to buy his freedom.

Snake and Brain (Harold) have history. Turns out Harold is the reason Snake got pinched during the failed bank robbery. But As much as Snake wants to blow a hole in his head he needs him. The Brooklyn bridge is the only way out of the city and it’s been mined. Brain is the only one who knows where the mines are placed.

To further complicate matters, they are running out of time. Even though Snake has the President, the peace conference is to take place the next day and Snake has a time decayed bomb in his neck that will go off unless the President is delivered in one piece to Lee Fucking Van Cleef in time to present the MacGuffin to the Russian Premier at the conference.

Of all of the various magnificent reasons Escape From New York succeeds, it’s John Carpenter’s ability to build excruciating tension that really shines.

I won’t spoil the ending. Don’t be a fucking pussy and just fucking watch it. It’s a perfect film. It never once skips a beat. Every last actor is an icon. It’s John Carpenter film making at its best when he was on his epic run. It’s a movie for guys who love movies in every sense of the word.